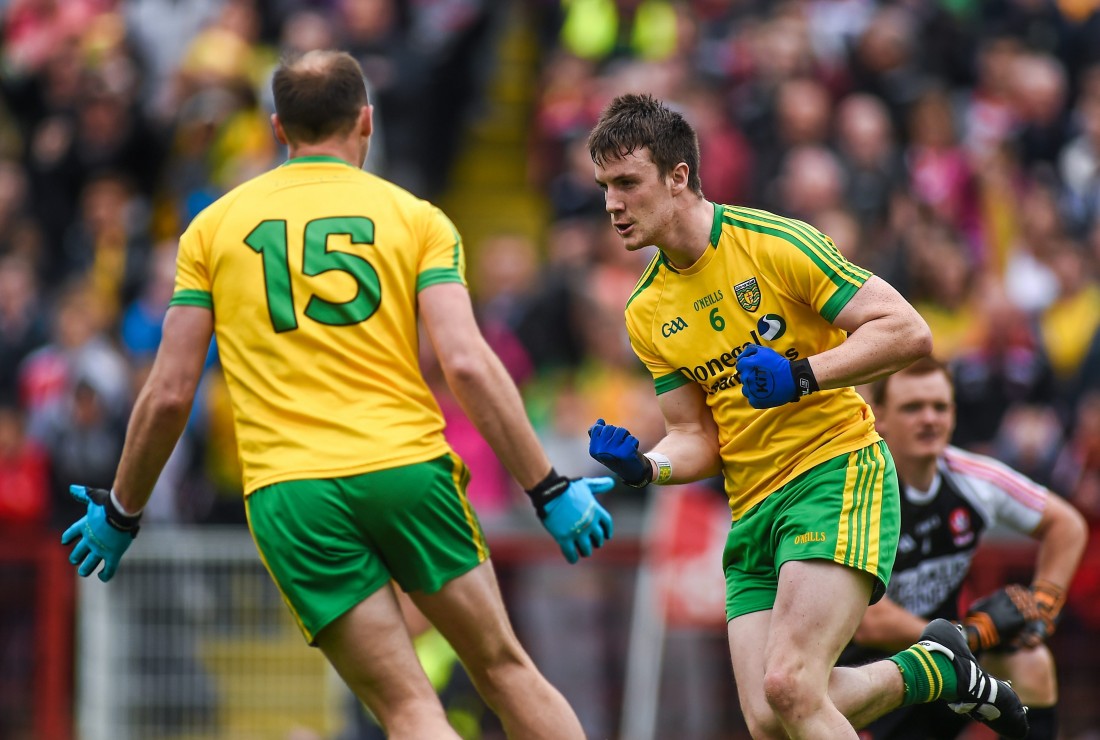 THE sounds of summer are in the air and Donegal are on the prowl again.

A devastating start to the second half saw Donegal overcome Derry and book their place in the Ulster semi-finals, with Jim McGuinness’s side looking a good bet for a fourth Ulster final in a row.

They trailed 0-6 to 0-4 at half-time, but they exploded to score 1-5 during the opening 13 minutes of the second half.

It was here that they laid down their credentials to the province on a day when Donegal’s tactical nous, experience and patience came good.

Leo McLoone’s goal, netted in the 39th minute, was the game’s big score as Donegal scored a win at a claustrophobic Celtic Park.

Thirty-five seconds into part two, Donegal outlined they meant business. Karl Lacey, magnificent throughout, made a superb interception to rob Niall Holly. When the ball was worked toward Anthony Thompson, the Glenties man converted and Donegal were within striking distance.

The decisive score arrived when Thompson’s long ball found  Murphy – now closer to goal than he had been for most of the first half – and he off-loaded to the rampaging Frank McGlynn. His lobbed pass over the head of Gerard O’Kane was magnificent, but McLoone still had work to do. McLoone’s finish was clinical, a fine lofted left-footed shot that found the bottom corner of Thomas Mallon’s net.

Murphy started as an extra man around the middle of the field – an area that didn’t have the presence of the suspended Rory Kavanagh, the injured Neil Gallagher or the strategically-placed sub Martin McElhinney from the start – but the Donegal captain had the winning of the game during that period of Donegal dominance at the outset of the second half.

He sold a dummy, which Chrissy McKaigue bought for a fine score that opened up a three-point lead, but it was his point in the 42nd minute that justified the admission price and then some. Murphy stood over a sideline ball just aside the flag of the 45-metre line and looked to take it short. McGuinness had a word in his ear, four steps late and he was sending a booming effort off the outside of his right boot sailing between the posts.

A better score, you are unlikely to come across so long as this summer advances.

Tactically, Donegal were on the money in these moments. Rory Kavanagh watched on suspended and McGuinness opted to leave Neil Gallagher in reserve, while he sprang a surprise in not starting Martin McElhinney, who had played well in the engine room during the League. McElhinney came into the fray at half-time and Gallagher was put on just as Murphy’s sideline kick raised the green and gold flags for a four-point lead.

From the off, Paddy McGrath was included for his first game for the county since last year’s All-Ireland quarter-final defeat to Mayo and the diminutive Darach O’Connor – an 18-year-old pupil of Scoil Muire in Buncrana – made his first Ulster SFC appearance.

By the 48th minute Donegal were six in front, as Murphy fired over a free and a blistering Tir Chonaill move saw McGlynn again provide the assist for Patrick McBrearty, only for his close-range effort to rise over the crossbar when a goal was on.

Derry were flummoxed and Donegal were in control, but the Oak Leaf refused to wither.

Mark Lynch fired over Derry’s first score in 20 minutes from a free, with Benny Heron and Emmet Bradley (free) bringing them to within a goal as the clock entered the final ten minutes.

Lacey was back to his best here, curbing Lynch’s ability to stamp authority in proceedings and also playing a lead role in those waves of attacks that saw Donegal move into the driving seat. McGlynn, Thompson and McLoone contributed magnificently and there were those golden contributions by Murphy that swung the pendulum.

Derry stayed in touch, but Neil McGee made a fine block to deny Kevin Johnson and David Walsh, a substitute, nipped in to dispossess Gareth McKinless. Benny Heron (’45) and Lynch made for a nervous finish after McElhinney got on the end of a fine move to score, but McLoone landed the clinching score in stoppage time, with Derry’s replacement James Kielt black carded late on, meaning Derry finished with 14 men as he had already been booked.

A frustrating ending for Derry, who had such a promising League campaign, but for Donegal it was a reminder that they haven’t gone away.

To have left Gallagher and McElhinney in the dugout on a day when Kavanagh was suspended and for the plan to work was a message that their’s is not the one-dimensional approach it is sometimes said to be.

In the opening half, they played the percentages and Derry didn’t take advantage of the possession.

Lynch (free) and O’Connor swapped early points before Donegal should have had a goal in the tenth minute. McBrearty’s effort for a point came off the left upright and it was the Kilcar man who had the second shot after possession was retrieved by the ever-alert Thomspon. His ball across goal was perfect for McBrearty, but his shot was blasted wide from a glorious position.

Lynch restored Derry’s lead, only for Christy Toye to get Donegal back on level terms after a very patient attack from the visitors. The Derry response was instant, Emmet Bradley slamming over to put Derry ahead once more.

Celtic Park was a chessboard, but neither side was committed to making a bold move.

Instead, play swung from packed end to packed end, with both teams piling the bodies behind the ball.

Lacey swept over, but again Derry hit the front as Niall Holly curled a massive score over from 40 metres out on the left-hand side of the field. At the time it was the score of the game, but Murphy would soon have something to say about that.

Holly was only on as a sub a matter of minutes, with Derry suffering a massive blow when Fergal Doherty left the park injured in the 16th minute. Doherty had won a couple of superb catches in the middle of the park. Although Holly dug in well, his influence was not what Doherty might have offered.

Derry led by two when Bradley converted a 45-metre free and it went out to three when Ciarán McFaul got in on the act.

By now there were worried faces in the Donegal camp, but Derry squandered chances to insert the knife even further. Bradley lost a free when he took too long and referee Joe McQuillan opted to throw it up in the 29th minute. In added time at the end of the first half, Derry passed up on a two-v-one attack when Holly completely lost his bearings racing onto a loose ball when only Neil McGee was back to defend against he and Emmett McGuckin.

Murphy, from a free, made sure Donegal were within striking distance at the break. When they’re in that position, Donegal always look likely – and it was in the third quarter where they came to life and did the damage.

On the occasion of his 150th Donegal appearance – and what was a record 51st in the Championship – there was the rare sight of Colm McFadden being held scoreless but even that wasn’t enough to get Derry over the line as Donegal absorbed the blows to advance and the rest of Ulster began to look in their direction again.