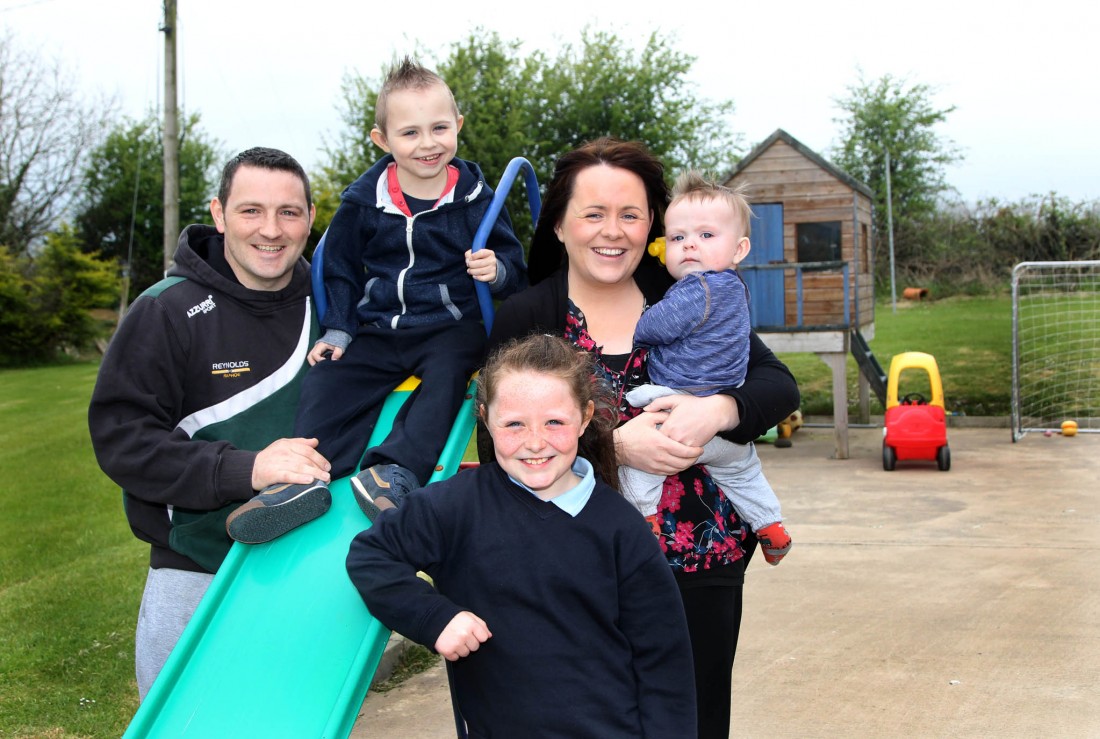 THE family of a brave six-year-old Raphoe boy have told the agonising, traumatic and yet uplifting story of their ‘wee miracle’, who has overcome a kidney transplant, open heart surgery and who is awaiting bladder surgery in the coming weeks.

On the outside, Christian McCullagh is like any other six-year-old, playing on his slide at his home in Beltony, but for parents, Gary and Aileen, his tale is an emotional rollercoaster.

On February 26th, they paced the corridors of Crumlin Children’s Hospital for nine hours, wondering and waiting for updates on Christian, who had to undergo open heart surgery to replace a leaking valve.

It was a procedure the McCullaghs were aware would be needed from birth but when Christian had a kidney transplant – given the gift of life with a donation from his doting dad – in October 2012 the strain of that surgery was too much.

Nine weeks ago, the mammoth operation was carried out and having recovered from that he is now preparing to undergo corrective bladder surgery in the next month.

“It’s not as big an operation as the heart surgery, but it’s every bit as delicate,” says Gary McCullagh.

“We always knew that he’d have to have the kidney operation, but not the open heart surgery. Basically the transplant put too much pressure on a leaky valve in his heart.

“We were told at that stage that it would be when he was ten before he’d need the operation, but the transplant was just too sore on it. If he didn’t have the heart surgery he wouldn’t survive.”

Gary was on his way to watch the Premier League of Darts at the Odyssey Arena in Belfast when he got the call that they were due in Crumlin four days later. Young Riley had just arrived in the family – he’s nine months now – and daughter Rocha is preparing to make her First Communion in Raphoe on Saturday week.

“We just had to make things as normal as possible,” Gary says, “but it was tough, very tough.

“I think even the surgeon was getting it tight – he was in from nine in the morning until six in the evening.”

Christian has been through more in his six years than most could expect in an entire lifetime.
Born five weeks prematurely, he had a series of medical complications and was given only minutes to live. Twice, the McCullaghs said ‘goodbye’ to their new bundle of joy, but little Christian defied the odds and survived.

Former Ulster senior welterweight boxing champion Gary donated a kidney to save his son in 2012 and the family endured agony in February when Christian went under the knife in Dublin.

“The kidney took a hit with him on the bypass machine,” mum Aileen explains.

“The renal doctors from Temple Street and Crumlin worked closely and he was moved to his own room in ICU. He was very ill that weekend and after that he wasn’t sleeping and was traumatised. The night terrors have stopped, thank God, and he’s in great form now again.”

He need regular heart and kidney check ups but once he has the bladder surgery the McCullaghs hope their own nightmare will be over.

“We just have to watch him and take care that he doesn’t go into something that’ll hurt him. It’s very hard to tell a wee child of his age not to be doing things!”

Christian has returned to playschool in Raphoe and in September will be starting ‘big school’, St Eunan’s NS.

“I just hope he’s over it and we’re looking forward to him having a childhood now.”

* A fund-raising boxing tournament will be held on Saturday night, May 3rd, at Deele College in Raphoe  at 8pm in aid of the Christian McCullagh fund