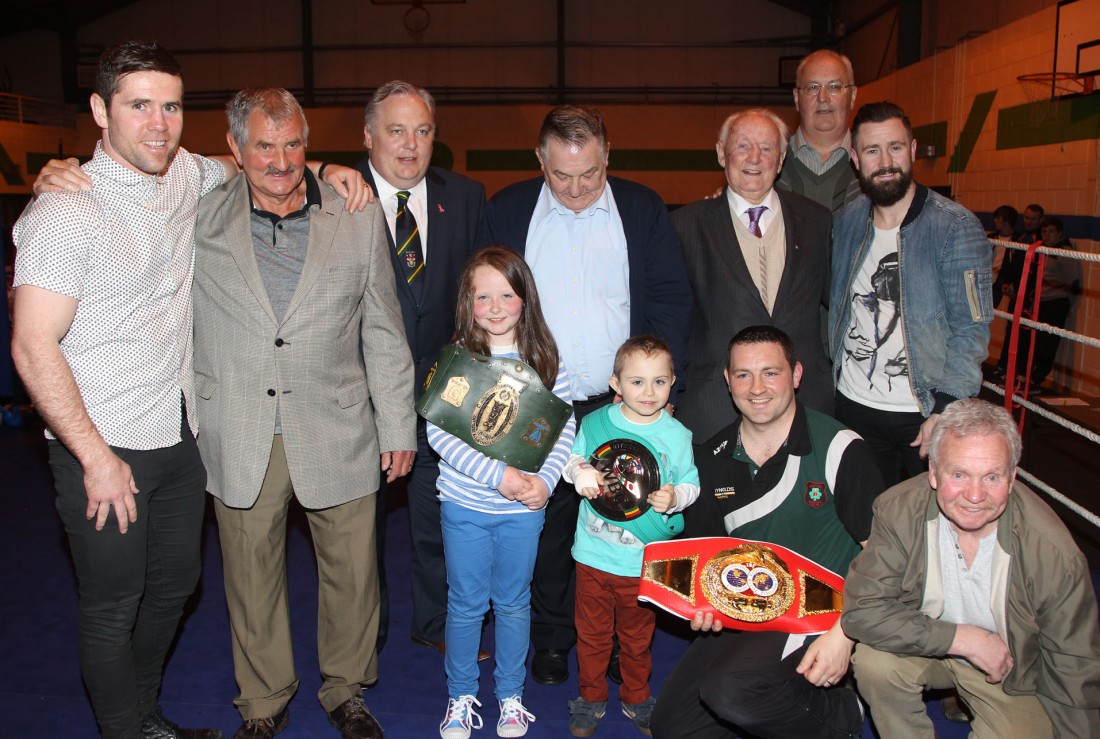 A STIRRING night of amateur boxing at the Deele College sports hall on Saturday night drew a capacity crowd foreign a fundraising tournament in aid of the Christian McCullagh fund.

The six-year-old son of Raphoe ABC head coach Gary and Aileen McCullagh has just had open heart surgery, a year-and-a-half after having a kidney transplant and in the next month is to have a corrective bladder operation.

Christian was the star of the show for his night, released from hospital just in time to step between the ropes and get his own mitts on the belts of Dungiven duo Paul McCloskey – the former undefeated European light-welterweight champion – and Eamonn O’Kane – 2010 Commonwealth gold medalist and recently-turned professional – who were the special guests for the tournament.

The 1982 Irish super-heavyweight champion Eamon Coyle from Raphoe and former Donegal person of the year Hugh Gallagher were also among those present, while Cllr Frank McBrearty Jnr and his father Frank senior were, as usual, by ringside for the Raphoe tournament.

“Christian is a brave young boy who has come through so much and we hope he has got over the worst,” Cllr McBrearty said.

“His father, Gary, does so much work for the Raphoe club so it’s important for the club and the people of the area to show our support.”

And they didn’t disappoint with a belting thirteen-fight card.

Livewire lightweight Dennis Lafferty was selected as the Raphoe Boxer of the Night. The Ballindrait native had a cracking win over Lisnafin’s Ronan McGrinder. It was a fine season-ending win for Lafferty, who reached a National Colleges final earlier this year. Despite suffering a nasty cut above his right eye – a wound examined by the ringside medic twenty seconds from the end – Lafferty saw it out to take the win.

A sizzling start to the third round paved Lafferty’s path. He had been in command during the first, with McGrinder inching back during the second, but in the third Lafferty made it his night as he exploded to life.

Clearly inhibited by the trickles of blood from the wound after being opened by McGrinder, Lafferty held his nerve and was the deserving victor.

Ryan McCullagh just ran out of steam against James Bonner, whom he defeated in his recent comeback bout in Castlefin.

Here, McCullagh’s combinations were again landing to good effect early on, with one whopping uppercut in the opening round shuddering the Dungloe man.

Bonner was the fitter fight and as the contest wore on the Dungloe boxer grew in stature and it was he who scored a split decision triumph.

Raphoe’s recently-crowned Ulster champion Oran Devine was unlucky to have the judges go against him, with Charlie Ward (Bluestack) taking a split decision. Devine, looking slick and sharp, was on top in the first round, but it was Ward who took a narrow 29-28 call in the latter two verses.

Cruiserweight Gerard Crawford could also feel aggrieved after he was on the wrong end of a 3-0 call against Carrigart’s Frankie Sweeney, a decision that had the corner men frustrated.

Danny Duggan was edged out by Sean Kilkenny, from the Sean McDermott BC in Manorhamilton in a close-range scrap. Duggan enjoyed the better of an excellent second round, but Kilkenny started and finished well to take a narrow win in a bout during which the visiting boxer’s headgear flew out of the ring during round three.

Young Liam McMonagle found the going tough against Oran Gethins the crisp and deadly Gethins having too much for the Raphoe lad, who took a count during the third round. Gethins was well on top, two powerful left-handers in the third an outline of his dominance.

Dunree’s Aaron Kelly was impressive on his way to a unanimous win over home puncher Brendan Boyle, while Letterkenny’s Aaron Doherty scored the red corner’s first win of the night when he inflicted defeat upon Sean McDermott’s Martin Feeney.

Feeney was fortunate to escape a count in the second, but took one in the third and the Letterkenny man soared to a fine unanimous-decision win.

Dunree’s Charlie Duffy made it two-out-of-two for his club on the night with a split decision win over Conor Coll of Raphoe. Coll opened well and was on top for the first round, but the home fighter was hampered by a bloodied nose for the most part and received a standing count in the second round.

Duffy upped his game and claimed the final two rounds, a blistering final round securing a determined win for the Inishowen man.

In a cracking 66kgs contest, Convoy’s Kenan Gibson, laid the platform early on against Letterkenny’s Patrick McConigley. Gibson did enough, especially in the second round, to score a split-decision victory.

There was no joy, however, for Convoy’s double Irish champion Bryan McNamee, who was an unfortunate loser by way of a split decision to Aaron Gethins of Ballinacarrow. In the recent Boy 4 National Championships, Gethins defeated McNamee on the way to a final he lost to Jason Harty.

Their re-match on Saturday was a tight affair, but it was Gethins who again held sway, coming out on top in rounds two and three after a solid start from the Convoy man.

Raphoe’s ‘Fighting Barman’ Patrick Friel’s hand was hoisted after he overcame Convoy’s Mark Lafferty in a ferocious middleweight bout. Friel unloaded a volley of dynamite during the third round to seal the deal.

One of the bouts of the night was the last instalment that saw Letterkenny’s Stephen Doherty score a unanimous win over Bluestack’s Terance Ward in a real war of attrition. Ward was counted in two and dropped in three, but the game Bluestack bomber kept at it, although Doherty was the comfortable points winner when the sums were totted.
The night was about more than boxing, though.

“I’d like to thank everyone who made this night a huge success,” Gary McCullagh said at the end of the night. “Peter O’Donnell did a fantastic job in organising the night and it’s great to see such a big crowd turning up.”