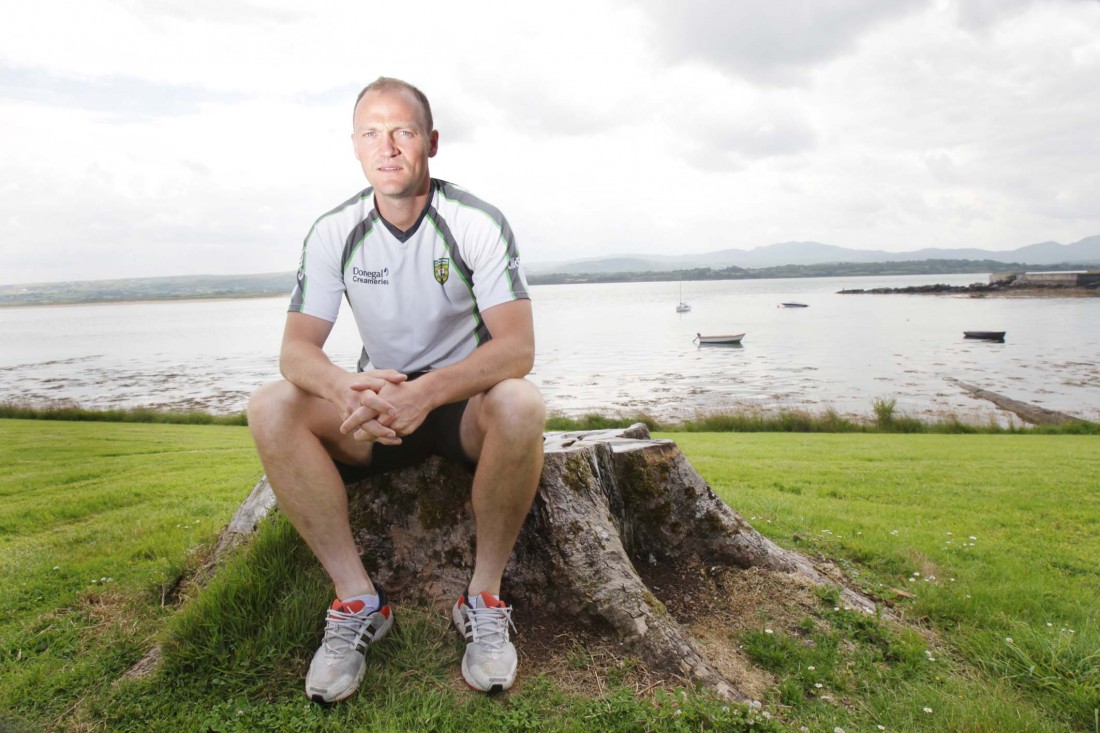 NUMBERS have always seemed to be Colm Anthony McFadden’s forte.

A maths teacher in St Eunan’s College, the Donegal forward’s pastimes include playing darts, snooker or golf, all of which depend on numeracy.

His football career has been a story of not just numbers, but now record-breaking ones. On Sunday the St Michael’s star will make his 150th Donegal appearance, the 51st in Championship football. Only Brian Roper (159) has played more times for Donegal; on Sunday evening no-one will have played more times in the Championship. McFadden is currently tied on 50 Championship games with Michael Hegarty.

To those who know him closely it has never been any different.

When Donegal met Mayo in the final of the Ted Webb Cup (Under-16) in 1999, Michael Gallagher traveled to Ballyhaunis from Dunfanaghy. His brother Gerard lined out at full-back on a  team that included future All-Ireland winners Paul Durcan, Christy Toye, Barry Dunnion (who captained the Donegal team) and, the eye-catching McFadden, who hit 1-6 as the Donegal boys, managed by Martin McHugh, took a commanding win, 1-15 to 0-4.

“I just knew that day that this fella was going places. He was head and shoulders above anyone else. He always stood out, all through club level, but when he was at it that day against another county team that was when we knew.”

There were never really any doubts by Sheephaven’s waters, though.

Through the ranks of an underage, McFadden rose to the occasion. The stars aligned for St Michael’s in an Under-12 B final against Downings in 1994, a game they won 2-10 to 1-7. The following year, St Michael’s Minor Board came up with an idea that would act as the catalyst for their eventual march into senior football.

“We were very lucky in St Michael’s that we had a very active minor board,” says Danny Lafferty, who has managed more St Michael’s team than he can recall.

“Colm Anthony always stood out. The ability was always obvious. Accuracy and score taking was always his forte.

“A number of people would have had a lot of influence, but none more so than his father, Colm senior. Himself and Noel Toye brought a lot of players through the club. They were with the boys from schoolboy age. Colm senior’s commitment to Colm Anthony’s career was a massive factor in his development – as was Noel’s to Christy’s career.”

McFadden was not alone and his partner in crime then remains in tandem yet.

“Himself and Christy always had a great understanding between one another,” says Noel Toye.

In that Ted Webb campaign, McFadden hit 1-31, with Toye notching 3-27. Even now there appears to be a telepathic understanding between them at times.

The one that stands out for the good folk around The Bridge is the Minor Division 2 campaign of 1998.

McFadden hit 0-6 to gun down Dungloe in the semi-final, but he absolutely nailed the final. He swung over 0-10 as St Michael’s defeated Carndonagh 0-13 to 1-8 in Ballybofey (a game refereed by one Mick Murphy).

“That left foot was always on show,” smiles Noel Toye.

“Sometimes we were going to games scraping at the bottom of the barrel, but Colm would pull something out of the fire to get us over the line.”

Five years later, McFadden was at it again when St Michael’s crossed a threshold they thought wasn’t possible. Progressing to senior football had long been a dream harboured by those with the vision some years earlier in putting the parish league into action. To this day, the parish league remains a vibrant part of the community. In 2003, St Michael’s long wait was over. Again Carndonagh were the victims, McFadden scoring 0-6 as St Michael’s won the Donegal Intermediate title 0-18 to 0-5. Senior football, finally, beckoned.

“I thought that we were never going to win an Intermediate Championship, but it was Colm who broke the ice for us,” says Mickey McFadden, who played alongside him in those years and who remains a familiar figure along the touchlines at The Bridge.

“We had been beaten in a couple of finals, but Colm was the difference for us in winning when we finally got over the line.  He was that bit of class that we were missing.”

Such was his influence, St Michael’s went on to win the Ulster Intermediate title and reached the All-Ireland final, losing to Cork’s Illen Rovers.

Mickey McFadden says: That was probably the time he really announced himself. It’s amazing now when you go anywhere with a St Michael’s crest on you, people will come up and say: ‘Aww, you’re from McFadden’s club’. He’s so well known and well respected for what he’s done.”

Mickey Moran had already taken note. The Derry man came in to replace Declan Bonner as manager late in 2000.

McFadden by then was making waves in the minors and it wasn’t long before he was given a go at senior level.

“I had no hesitation bringing him in,” Moran says. “He just blossomed. The cub worked so hard. He put in a great effort with his strength and conditioning. The premise I base everything on is that a fella has to be a good fella inside. By that, I mean he needs to be a strong character. Colm McFadden is that. He realised himself once he hit inter-county level that he’d have to work hard to reach his goals. He did that and what a finished article he became. He’s fabulous.”

Times have not always been kind.

It is easy now, perhaps, to forget that there have been bad days too. There was the hook that floored Brian Dooherty at Clones in 2007 when Donegal crashed and burned at Tyrone’s hands in an Ulster semi-final or that oft-mentioned Crossmaglen crucifixion on the occasion of his 100th Donegal appearance that left him wondering if he’d been nailed to the cross for the last time as a Donegal player.

He was just 27 at the time. The mental toughness answered his questions.

“Tennis players might start to retire at that age, but as a footballer I knew I could go on,” he later revealed.

McFadden’s personal recovery was a personification of the overall transformation of the county under Jim McGuinness, who is married to Colm’s sister, Yvonne.

Last year, McFadden told of tweaks to his own preparation when he said: ‘Rather than going down, kicking 100 shots and concentrating for 20 per cent of them, I’ll go down now, kick 20 shots and put full concentration on each one. I’m getting good practice, rather than a lot of practice.’

“What he has added to his game is that he works so hard now,” McGuinness says of his brother-in-law.

“Colm was always extremely talented. He has an awful lot of ability and now that he has added work-rate on the pitch and real focus off it, those aspects are now being channeled into all aspects of his life.

“He has been integral to the success of the team. Colm has been a great servant to Donegal football. His contribution has been immense.”

McFadden was in the running for Player of the Year as Donegal reclaimed ownership of Sam Maguire in 2012 having scored 4-32 along the way. It was perhaps through his utter reliability that he missed out; it became expected of him such was the dependability and regularity of his clinical tallies. Those predatory instincts were laid down in the final when, after eleven minutes, he seized on a rebound after Patrick McBrearty struck an upright before firing low past David Clarke to the Hill 16 net.

An All-Star followed, but it was not by chance that McFadden reached the top, but rather by his own design – and that of his father who the player remembered last year in an interview as having driven him from Creeslough to Galway for a training session with UCG in snow one morning in 2003. He won a Sigerson Cup medal that year. That dedication has rubbed off. 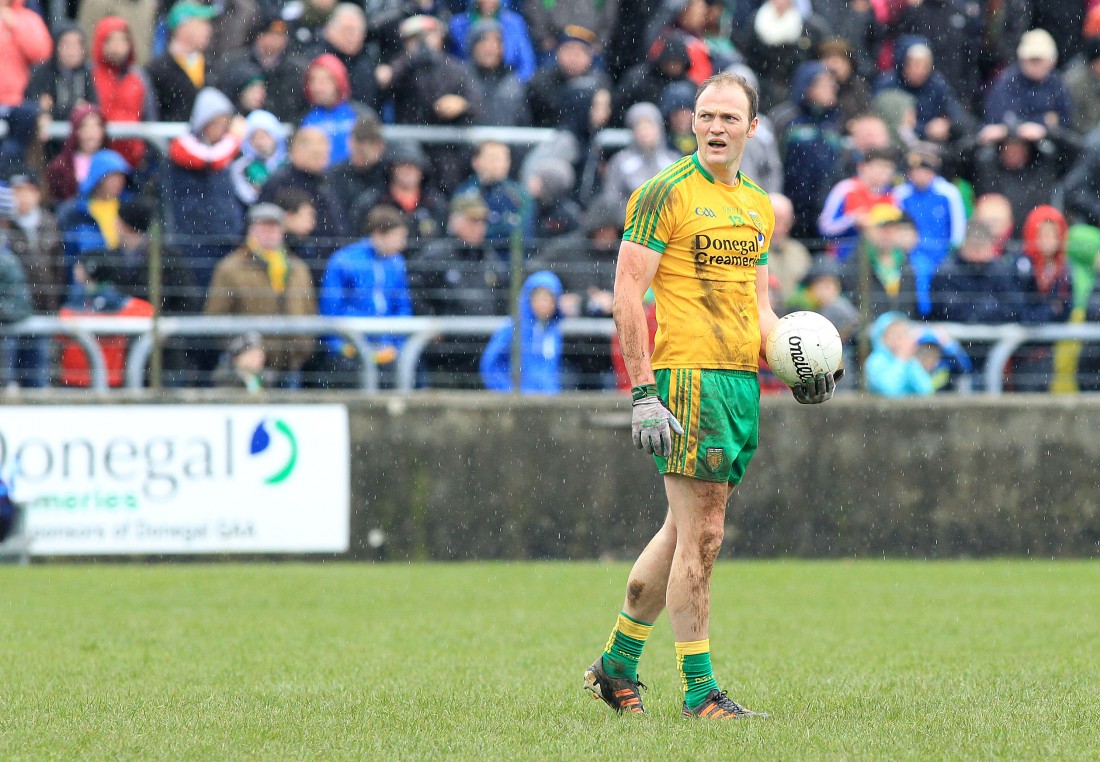 “It could be a Saturday afternoon or any random evening during the week and it wouldn’t be unusual to wander past The Bridge and Colm would be out kicking ball, practicing his frees,” Lafferty says.

“He’s lethal inside. He’s a killer in there.

“All you hear from opponents is: ‘Watch the left’; ‘Put him on his right’, but if Colm gets that half-a-yard on you he’ll punish you.

“He has fantastic composure, mental ability and concentration. His coolness under pressure is there for everyone to see.  Colm was always well prepared mentally. He was always on top of his game like that. He could motivate himself and bring that into a dressing room situation.”

Gallagher was captain of St Michael’s when they reached the Donegal SFC final in 2011. Although two years McFadden’s junior he’s always been in his company.

“Sometimes you actually think that he can do the impossible,” he says

“He just oozes confidence and it’s never advisable to take Colm off. When he’s on form there’s actually no stopping him – a blanket defence and he’ll just stick them over from way out the field; you need to be stuck to him like a plaster. I’d trust him with anything inside the opposition half at all – regardless of the breeze!

“People have said that he’s a lazy player, but he’s far from it. I’ve heard people come out with stuff like: ‘Sure most of the scores are from frees’. Colm wins an awful lot of his frees himself.  He has natural ability, obviously, but he works hard at it. He isn’t a man who turns up at the weekend and, by chance, expects the kicks to go for him.

“Still, to this day, his frees are something that he works on.”

The stance is a familiar one: Facing away from the posts, around he sweeps, effortlessly pinging over with that trusted left boot. His trigonometry is generally on the money in these situations.

“We had the same with Enda Gormley in Derry where the run-up nearly defied everything,” Moran says. “But under pressure, there is no-one as cool. He’s the man for the big scores and he pops up with them so many times.