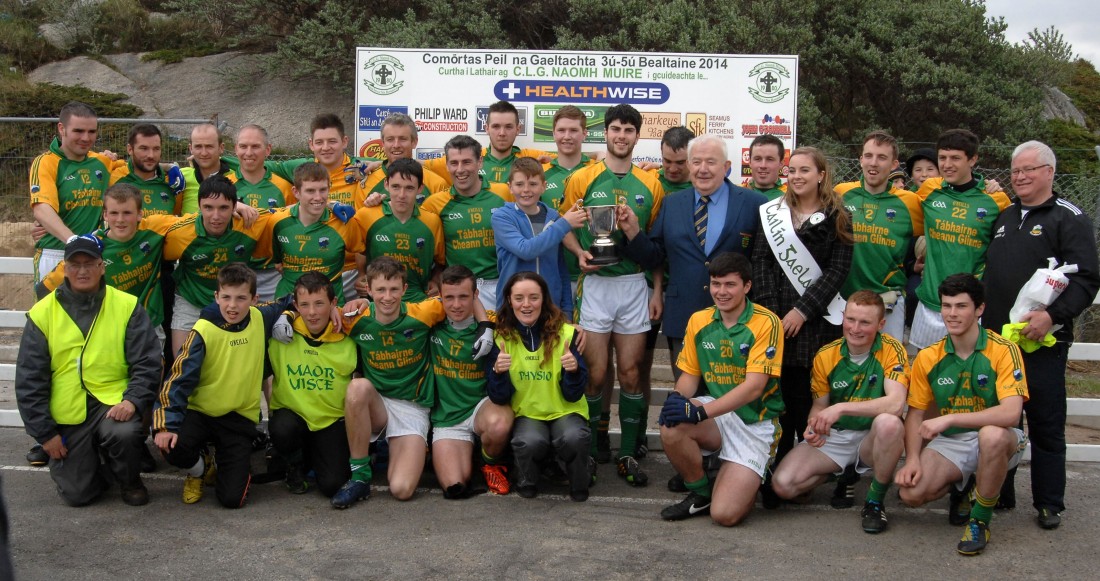 HISTORY and tradition counts for a lot around Glencolmcile.

Pointers to the past are plentiful for Naomh Columba and their success in Monday’s Junior final at Comortas Peile na Gaeltachta was the senior team’s first piece of silverware since the winning of Division 3 in 2009.

Two weeks ago, the club’s minor team defeated Ardara in the Southern Division 1 League final. Pauric Cunningham, Paddy Byrne and Ryan Gillespie played that night in Dunkineely and were among the stars on Monday at The Banks.

Now, for the first time since 1997 Naomh Columba will travel out of Donegal to represent the county on the June Bank Holiday weekend.

“This is a competition we have a lot of tradition in,” manager Paddy J McGinley said.

“For a period of twenty years we competed in the All-Ireland Gaeltacht finals, but we haven’t traveled now in the last seventeen. We are rebuilding and it’ll be a good learning ground for these young lads. It’ll take a period of time, but the tradition of the club and what we have done at underage will bring us through.”

In ’97, Naomh Columba won both the junior and senior Donegal Gaeltacht titles. That their seniors are now competing in the junior section is perhaps a pointer to their fall from grace, but McGinley is confident that the ship has steered clear of the jagged edges on the cliff.

Heroes of the past now run through the club’s nerve centre and McGinley can pin-point the moment the fortunes began to change.

“Five years ago when Anthony Molloy – just his very presence coming in – came in, it gave us a lift. It gave the young lads a focus,” he said.

“We’re building behind the scenes and have been for four or five years.

“We’ve had our role models here, the Finian Wards, the Noel Hegartys and John Joe Dohertys. When someone like Anthony came in, it brought a renewed focus. Now, we have John Joe in as club chairman, Noel is in charge of the minors and Anthony is with the under-16s.

“As a club, we’re happy with where we are and the direction we’re taking.”

McGinley’s men had plenty of top performers on Monday, but he picked out Declan McGuire for praise following a weekend in which his side played three times. Having lost to Milford in the League on Friday, they overcame Gaoth Dobhair in Sunday’s semi-final to reach finals day.

Many of these players have graduated from Colaiste na Carraige’s successful nursery or are still walking the halls – and McGinley said the experience of big games at schools level ‘can’t be ignored’. He said: “It has given lads exposure for four or five extra months and they are successful as well. We shouldn’t ignore that. That has been vital for us.”