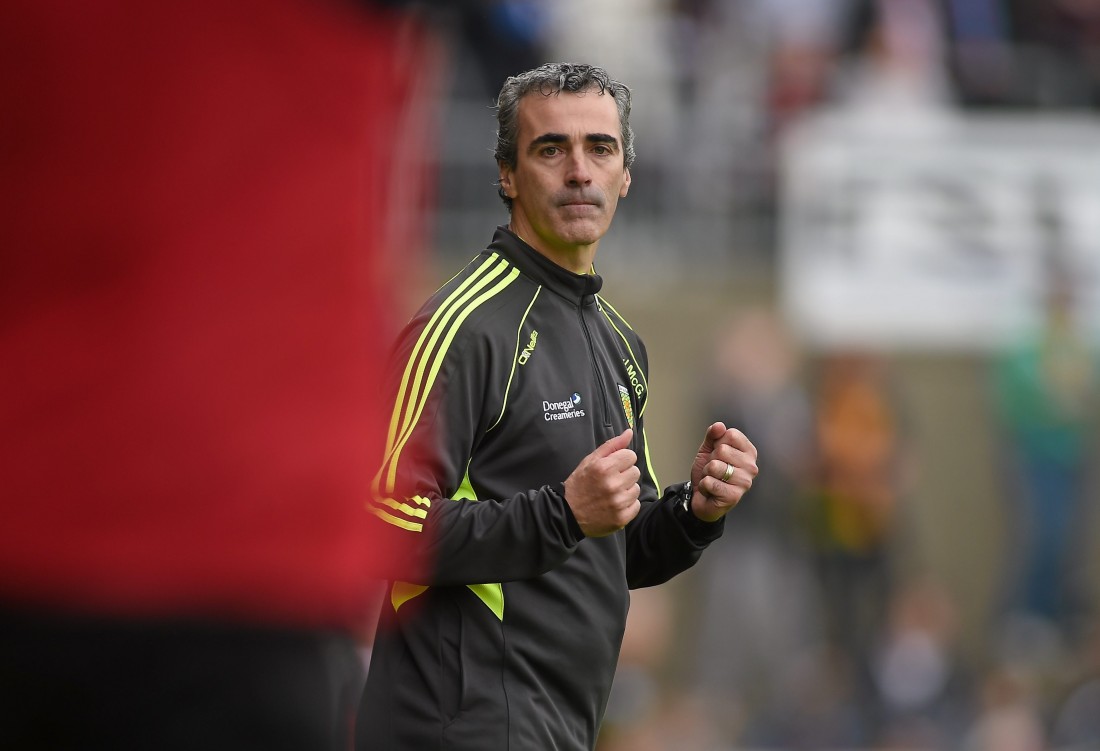 Donegal manager Jim McGuinness clenches his fists in celebration at the final whistle.

The Donegal manager was joined as a special guest by boxing star Jason Quigley, another man who knows all about playing the percentages.

In a speech to the student body, McGuinness urged them to keep aiming for their goals. The Glenties man outlined the importance of having ‘focus’ and ‘belief’, while he explained the ‘graph of the game’: There’d be ups and downs, you might lead by a few or trail by a few, but all that mattered was the end result.

If he’s ever giving a similar speech and needs to visualise the message for his audience, then Donegal’s Ulster Championship quarter-final win over Derry was the perfect illustration.

Donegal took everything Derry flung upon them in the first half, came out with an altered set up to blitz their opponents with a goal and five points inside 13 minutes of the restart before having to withstand another flurry from determined Derry late in the day.

“We knew Derry were going to play possession football so we just had to be patient and do the same,” said McGuinness.

“I thought we did it really well, especially in the last 10 minutes. It can be difficult without important midfielders.”

A one-game suspension ruled Rory Kavanagh out while Neil Gallagher was hampered by an ankle ligament injury. When McGuinness then opted not to start Martin McElhinney, there were few who understood. But his plan was executed as it had been planned and it worked a treat. Michael Murphy started around the middle third before being allowed move inside to do what he does after half-time.

McGuinness explained: “The strategy was to manage the situation around the middle of the park. Martin has started most games, so we held him to take him in for Christy (Toye) and we tried to free up other people. We had Neil there if the backs were to the wall. He has a significant injury on his ankle. He was only there if needs be. The game was in the melting pot and we felt there were 25 minutes in him.

“I felt the best way to be competitive in the first half was to supplement the midfield with Michael out there. We were also against the breeze in the first half. We got a bit of control on the game in the second half. We got the opportunity to put Michael inside and the chance to put some early ball in. Maybe in the first half the criticism was that we had a couple of good goal chances and we couldn’t get more runners and support play in certain areas.”

With Murphy as the obvious point of reference Donegal came out like an express train in the second half. The Glenswilly man stood tall in those moments were Donegal put their hands around the neck of the game. It was from his fetch that the move for Leo McLoone’s goal gathered steam and the captain was again to the fore when it mattered most.

McGuinness said: “There were some lovely passes into him and he claimed them well, including the offload for Leo McLoone’s goal. Sometimes things work and sometimes they don’t so thankfully it worked today.It was very similar to the goal he scored against Down in the Ulster final (2012), only it was in the opposite side.

“The thing about it was that Michael gave us the option inside. He showed very aggressively for the ball and we had good runners off it. That was important because it gave us a good platform.

“We wanted a lay a foundation for the second half when we planned to get some good ball into Michael. That’s how it panned out.

Derry brought confidence into the game and into their play. When you’re down on the pitch, teams feed off the other teams. It can be difficult to face that but I thought we faced that challenge well today. They held their composure.

“We were disappointed that we didn’t get more scores in the first half. We had a lot of chances. It was a wee bit frustrating. It should have been closer to being level at half-time, but we were two points down and had to accept that.

McGuinness and his team are well used to being under scrutiny and they’ve felt the heavy headlines of late again, but any criticism or doubts that have lingered haven’t crept inside their circle.

He said: “The key group of people are the players. They know what’s involved in an Ulster Championship and what’s involved in the preparation for that and trying to win it. From our point of view we were focussed on trying to get things right for this game. We prepared as best we could and we got over the line.

“That will be for nothing if we don’t get over the line the next day. Our focus has to shift very quickly towards Fermanagh or Antrim. If we win that it puts us into a final. What’s up for grabs in that game is massive.