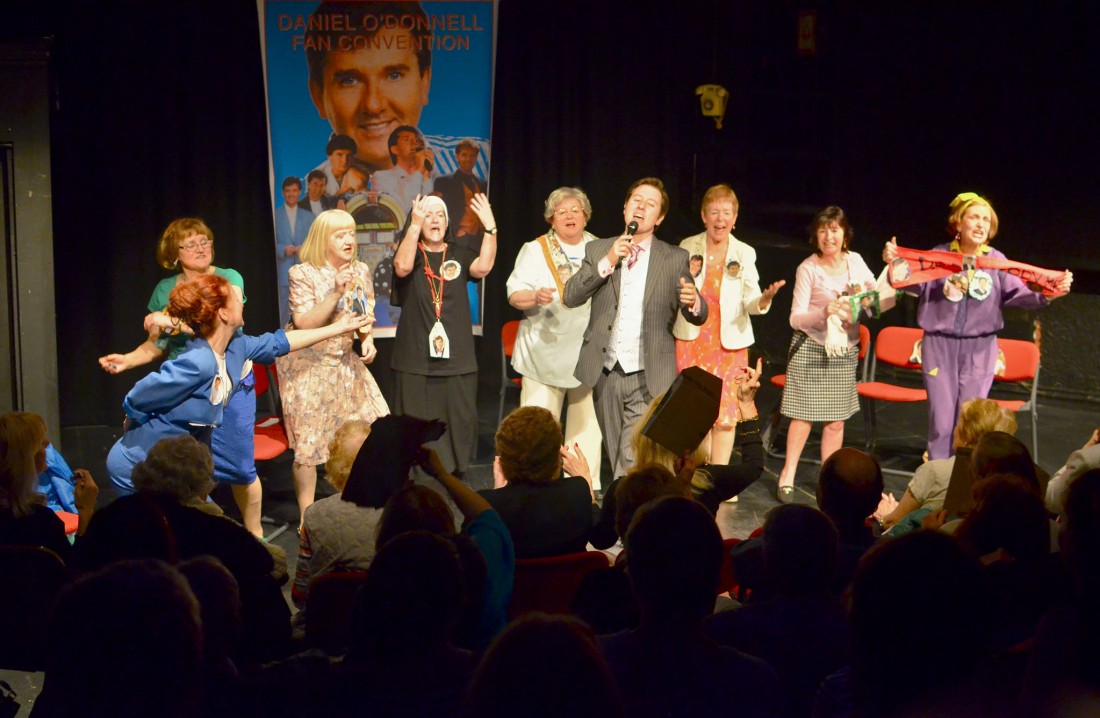 By Cronan Scanlon
THERE was a strong Donegal presence on the stage of the famous Wimbledon Theatre in London last weekend where three packed houses enjoyed a play based on the lives of fans of Kincasslagh crooner, Daniel O’Donnell.

‘Lovin’ Daniel’ is a new Irish community play written and directed by Rosalind Scanlon which attracted a lot of interest, including that of Daniel fan, Prince Philip.

Rosalind has strong Donegal roots – her mother Peggy (nee McGowan) is from Correfrin, Ballybofey, and her father was the late Eddie Scanlon from Sallywood, Killygordon.

Lovin Daniel tells the stories of the lives Daniel’s fans – throughout the past two decades, he has acquired millions of adoring fans – mostly older women, from all over the globe.

Its setting is the first ever ‘Daniel O’Donnell Fan Club Convention’ and the story is narrated by his ‘mother’ Julia.

The script for the play, which had the blessing of the man himself, was developed through a series of community drama workshops and interviews with genuine Daniel fans.

The cast was made up of members of The Older Irish Women’s Community Drama Workshop and Rosalind even had to take to the stage herself after one of the women suffered a heart attack in the lead up to the show.

She was joined on stage by Newtowncunningham native, Anne McDaid, as well as Mark Bonar (aka Mark Kavanagh) from Letterkenny, who played the role of Daniel.

“Apart from Mark, I had to train all the cast as they had never acted before in their lives, and they were so professional. It was great fun,” she explained.

“The audience was really involved too – they were given scarves and placards as they entered the theatre and even got to have a cup of tea with the cast.”

She added that Mark was so convincing playing the role of Daniel that some members of the audience were sure that he was the real thing.

Rosalind said Daniel was fully behind the project and even plugged it on his own website, however, he was unable to attend due to touring commitments as well as Majella’s illness.

She was one of the three hundred members of the Irish community who were invited to a reception in Buckingham Palace last month.

The event was hosted by Britain’s Queen Elizabeth and her husband, Prince Philip, during the State visit of President Michael D Higgins. The reception marked the contribution made by Irish people in Britain.

“I also met Prince Philip who told me he would love to go to see the play as he is a huge Daniel fan, as was the late Queen Mother. “However, he sent me a lovely email to say that he could not attend in the end up as he was out of the country.”