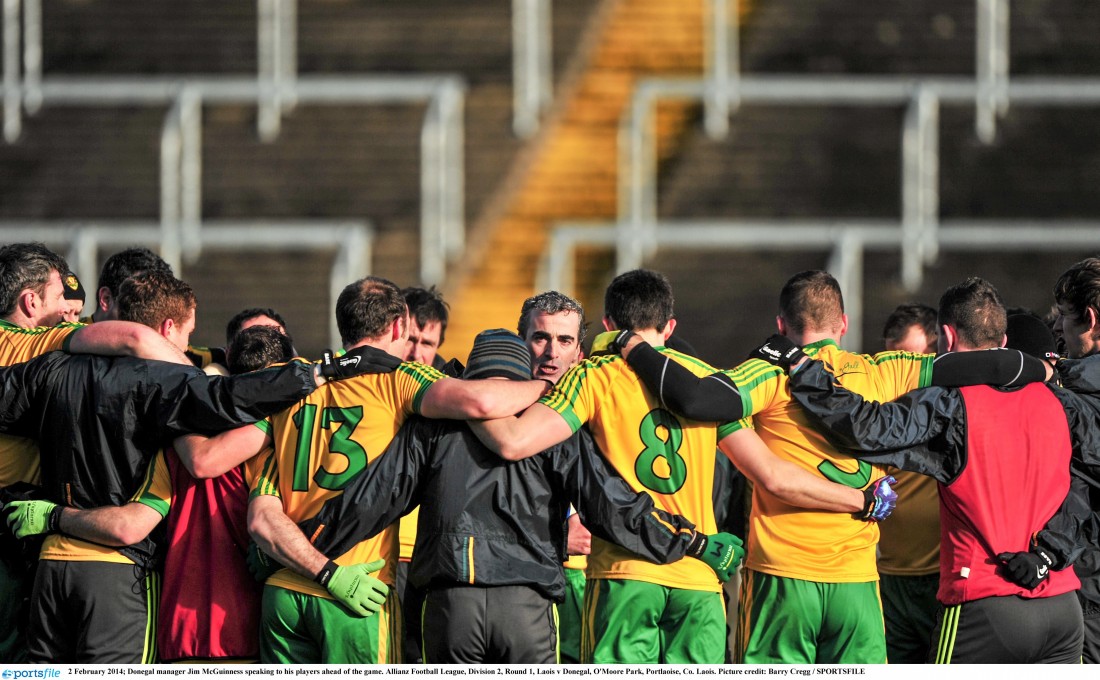 JIM McGuinness laid down the message as early as he could.

When the Glenties man took over the Donegal senior football team in 2010, he famously showed them a cutting from a national newspaper that had them ranked 19th.

His first Championship match as the manager, in May 2011, was attended by only 7,385. They had won Division 2 and booked their place back in the top flight, but the national media hadn’t really paid heed. That changed on May 15, 2011, when Donegal and Antrim met for the only slice of action on a soaking Sunday in Ballybofey. Donegal won by six points, 1-10 to 0-7.

A first Ulster Championship win in four years was recorded but the occasion is now remembered for the post-match comments of RTE Sunday Game analyst Pat Spillane. Having named Ryan Bradley as the Man of the Match, Spillane said the Buncrana man was ‘the best of a bad bunch’.

“I’ve a duty of care to the players to look after them and we just weren’t happy that we were being disrespected,” he told RTE’s Darren Frehill in the moments after their quarter-final win over Cavan a few weeks later.

Ever since, Donegal have been headline news, but it is the intensity of the attention that focusses on his team that has McGuinness flummoxed.

Following Mark McHugh’s departure from the panel, the lens was again trained on Donegal, whose decision to park the senior and intermediate club championships has come in for stern scrutiny from all corners. Even the GAA’s Director General, Paraic Duffy, had a sideswipe in his annual report. Duffy hit out at ‘one county’ for making the decision which he said ‘shows neither concern nor respect for club players.’

Last week, a survey in the Sunday Times showed that Donegal were not alone in that regard: Of the nine counties in Ulster, all had either scheduled their club championships to begin following the likely exit of their county side or – in the case of Monaghan and Tyrone – would play one round in May/June before waiting until their interest in the All-Ireland series had ended.

In his post-match press briefing following the Division 2 final last month McGuinness expressed his frustration at the spotlight continually focussing on Tir Chonaill after Division 1 League games were called off on Good Friday. He asked about the ‘other three’ teams who were in Croke Park that afternoon – and had his answers to hand: Derry kept their players out of action the previous weekend; Monaghan postponed a round of games; Dublin didn’t schedule club fixtures that weekend.

Yet, Donegal became ‘the story’ and McGuinness noted one online GAA-specific outlet who ‘had a big sensational story and the next story up was about Monaghan but the context of it was buried that they were calling a round of games off’.

“There was a whole national frenzy over us calling off a round of games,” McGuinness said.

“All of a sudden I was ‘controlling the fixtures’ and was ‘calling fixtures off’.

“All anyone wants is the balance and sometimes I don’t think that is there because, if it is not sensational, it is not worth printing it in terms of Donegal.”

It puzzles the Donegal boss. Asked why Donegal were sensationalised. McGuinness said: “Because a big decision had to be made in 2011 and on the back of that other decisions. At the time of the year it happened, there was a lot of media around it. A lot of other things rolled on from that.”

In late 2011, McGuinness’s ruthless edge came to the fore when he axed double All-Star Kevin Cassidy from the panel. Cassidy contributed to a book, ‘This Is Our Year’ which focussed on each county’s Championship odyssey, in Donegal’s case a journey that carried them to the All-Ireland semi-final (their 0-8 to 0-6 defeat there also drew odious comment and analysis after an ultra-defensive formation came close to stifling Dublin).

Cassidy was banished and the following September the author, Declan Bogue, was asked to leave the press room in the Hogan Stand before McGuinness would conduct a press conference after his side defeated Mayo to win Sam Maguire. “I’m not going to let somebody sit in a room and fill their pages tomorrow (Monday) on the back of what we’ve done today when they in their wisdom degraded me as a person and some of my players,” McGuinness said at the time.

If there is one thing McGuinness has never tolerated it is when he feels he or his players have been ‘disrespected’ and TG4’s questioning of the manager before a League game against Laois in February 2012 – with Cassidy awkwardly shuffling his feet close by – saw them placed on the black list.

In 2013 Donegal made headline news when claims were made that Patrick McBreartry was bitten during a League game against Dublin and after Mark McHugh picked up a number of injuries (a perforated eardrum, concussion and a quad muscle tear) following a clash with Monaghan’s Stephen Gollogly in the Ulster final that saw the manager raise concerns for his players’ safety.

A reshuffle of the cabinet – which saw Rory Gallagher, Maxi Curran and Francie Friel leave – in the autumn once more flicked Donegal to the back pages.

“Last year a lot of this was going on and it was very difficult at times in terms of the team because there was so much going on in the backdrop and that is why it is very important from a manager and a players’ point of view that you don’t get caught up on that, that you don’t lose your focus.”

It is the same now and one of the reasons McGuinness opted not to mention McHugh’s departure to his players at training the evening his decision was conveyed.

He explained: “If I am fighting a fire, or the players are fighting a fire, how can they have Derry in their sights. It doesn’t work like that and that is why I prefer talking about the football.

“I suppose it is trying to sell papers at the end of the day, to make a headline and I understand that but it does not happen in other counties the same way that it happens in Donegal.”

Now ready to enter his fourth Ulster Championship campaign as Donegal’s manager, McGuinness has hardened to the focus, but it hasn’t distilled his love for a job he says he considered himself ‘privileged’ to hold.

He said: “In terms of criticising the job I would never do that.

“I am working with a group of players who are giving everything, who are very focussed and, in my opinion, very humble and that is the kind of people I like working with. That bond has never ever been even dented, it is very powerful, it is very personal and very human. It is very connected and we really enjoy giving it everything we have got for the county.

“I am in a privileged position to be working with people who want to work because I have been in dressing rooms myself with people that maybe don’t have it worked out, but these fellows know that if they work hard, keep their head down and keep driving forward as best they can, they give themselves a fighting chance of being successful.”