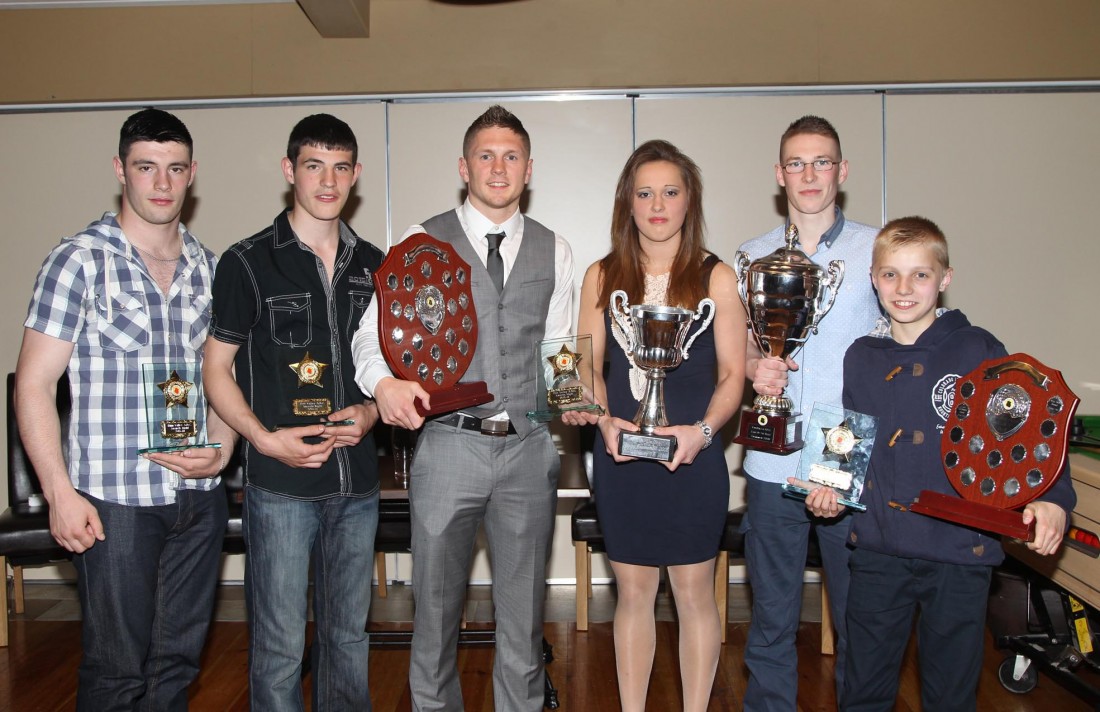 The club’s star turn, recently-turned professional Jason Quigley, was in attendance and was named as the Boxer of the Year by the club as he prepares to jet off to Los Angeles to begin a pro career with a first fight scheduled for July 12 at the famed MGM Grand in Las Vegas having been snapped up by Oscar De La Hoya’s Golden Boy Promotions.

Finn Valley ABC Head coach Conor Quigley was the MC for the annual awards function, at which the club’s various array of impressive champions were each honoured for their achievements.

“What this club has achieved has been a dream of mine,” Conor Quigley said.

“Many the ups and downs we have had, but it has been worth while. It has been absolutely fantastic.

“Everything about it has been brilliant.

“We now have boxers from no height at boy 1 level to senior boxers and now a man going on to professional level.”

Conor achieved three-star coaching status in 2013 and will head to America as Jason’s coach.

Jason was honoured for his domestic, European and World endeavours before being named as the club’s Boxer of the Year.

“He has been the man who has been the inspiration for this club – to boxers, to myself and to Billy (Quigley, club coach),” Conor said.

“When you’re going into your third seniors and you’ve lost the last two and you lose by a point or two it’s hard. We moved on and we went into the third seniors in 2013 and won them.

The yellow and black conveyor just keeps on rolling, though.

Austeja Auciute, the club’s golden girl, won the seventh and eighth Irish title of her career in 2013 and has also a World bronze medal to her name.

“You don’t just win these things,” Conor Quigley said. “There is no-one more dedicated to the sport. She has everything: Discipline, lifestyle and dedication. She can be what she wants to be.”

Quigley predicted a ‘massive future’ for Michael Gallagher, a ten-time Irish champion who is heading for China to the Youth Olympics in August; hailed the achievements of three-time Irish champion and European bronze medalist Leon Gallagher; and outlined the hurt suffered by McGarrell in 2013, who bounced back to ‘blitz everything in front of him’ in 2014.

Fights of the night from the club’s tournament with the Olympic BC were presented to Auciute and Orin McDermott following excellent wins at the show.

Quigley said: “Success breeds success. The talent we have here is unreal. Everybody is feeding off everybody here. It’s like a conveyor belt. In ten years we have never been empty handed coming down from Dublin.”

Special appreciation awards were given to the hard-working and ever-present Sharon Scanlon, the club’s dedicated coach Billy Quigley and one the most important awards of the night to Caolan Lynch, who tirelessly works with the club’s underage boxers.

Tributes were paid to club secretary Muriel Quigley and Patsy McGonagle’s team from the Finn Valley Centre were thanked, as was Peter O’Donnell, President of the Donegal Boxing Board.

Jason Quigley led the tributes from the club boxers to his father and coach Conor, to whom they presented a special award of appreciation.

Jason said: “He has been the rock in this club from day one. He is the man behind me and he has given every boxer in here a chance to change their lives.”

One of the special guests on the night was Cllr Frank McBrearty Jnr, a long-time boxing enthusiast and a sterling supporter of Finn Valley ABC.

“It’s absolutely phenomenal what this club has achieved and it’s down to team work,” Cllr McBrearty said.

“The record speaks for itself.

“When you go into the ring it’s only you and the other boxer, but it’s still a team sport. The team behind the boxer makes the boxer. Also the team behind the club itself are so important. Dedication is the word I use and the more dedicated you are to something the more rewards you’ll get out of it. The success of this club proves that.”

Boxer of the Year – Jason Quigley

Most Improved Boxer of the Year – Eoin McGarrell