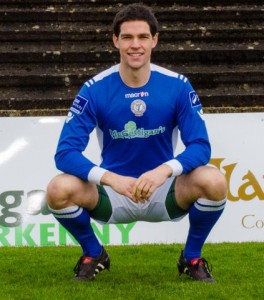 PACKIE Mailey is cut from a tough mould.

Mailey has painful memories from his last encounter with Shelbourne, but it wasn’t just the 2-0 defeat that left the Convoy man seeing stars on Finn Harps’ visit to Tolka Park at the start of April.

Twenty-two minutes into the game, Gareth Coughlan fired a textbook free-kick up over the Harps wall, bending it just inside the right-hand post of Conor Winn, the Harps goalkeeper. The frustrated Keith Cowan swung a frustrated right boot at the ball after it had cannoned out from the net. Mailey’s left cheek felt the full force. Tolka Park began to spin.

“I was a bit dazed after it. Mickey McGlynn was out with me, but I wanted to play on. I felt it, that’s for sure. We were in training on the Sunday and Sean McCarron had it on YouTube: ‘Here, get a look at this’. ‘Get a look? I’m still feeling it’.

“It was a bit of craic around the dressing room for a while after it.”

It was a night that saw Harps fall to their first defeat of the season as Keith Quinn netted from a late penalty. Harps had Josh Mailey sent off in the closing moments and just before half-time Shelbourne ‘keeper Greg Murray saved a penalty from Michael Funston.

For Mailey, it was a night that quite literally felt like a kick in the teeth.

‘A brave, tough boy,’ was how Ollie Horgan described him after vowing to play on.

“It was an unfortunate night. We missed a penalty at one-nil down and we only conceded the second goal late. We had Josh sent off as well and he was really unlucky. A lot of things went against us.”

Mailey, who works for the Letterkenny-based North-Fit, a health and wellness company, isn’t surprised that Shelbourne are out on their own at the top of the First Division. Cobh are cut adrift at the bottom, with just two points to their name. Although Harps are the next team up, there are only three points between Harps and second-placed Wexford Youths. So fine are the differences, a win in Galway last week would’ve seen Harps sit third, as opposed to seventh.

“We’ll battle and compete; we won’t fear anyone,” Mailey says as they get ready for a meeting with top-of-the-pile Shels in Ballybofey.

“The League is so tight at the minute it’s unreal. A couple of good results and we’d soon be back up there. A win in Galway on Friday and we’d have been sitting in third. That’s just the way it goes. I know it looks bad when you glance at the table, but the points are just really tight. We need to stick in there, though.

“We’ve shown a lot of encouraging signs. A wee bit more concentration would have seen us through. Like, in Galway we were one up in injury time and they got a goal from a corner. It’s tough to take, but then again a draw was a good result. It’s just wee things that have been costing us and we’re not far away.”

Mailey was drafted back to Harps by Horgan in December having been two seasons away from the game. He’d dabbled a bit with Gaelic Football, but his League of Ireland exploits looked over when he left prior to the start of the 2012 season.

He’d had a trial at Derry City but nothing became of it and the straining relationship with the management at Finn Park meant he was on his way, having played 82 times for Harps in three seasons, winning the Player of the Year award in two, 2009 and 2010.

He says:”I’ve settled in quite well. The first round of games now the body was sore and it did take it out of me at times. It’s a step up and sometimes people don’t appreciate the step up it actually is.

“It’s more of a team unit now. Everyone is on the same page now. Before, heads might have gone down easily enough, but now we keep digging in no matter what.”

The big disappointment for Mailey, who spent some time previously at Hibernian in Scotland – and had a loan spell at Stenhousemuir – was the sending off in Harps’ last home game, the one-nill defeat by Shamrock Rovers B. Nine minutes from the end, Mailey was given a second yellow card, after being seen to barge needlessly into goalkeeper Shane Fagan.

“I hold my hands up for that one,” Mailey says now.

“It was just stupid on my behalf. It’s a lesson that I’ve learnt.”

He is one of four Harps players to have been sent off this season, but he dismisses any notion of Harps developing a nasty, even ill-disciplined team.

He says:  “People are looking at our record and saying: ‘Harps must be a dirty side’, but we’re not. We’re far from it, actually. We’re hard-working and committed, but maybe we just need to think a bit smarter.”

Mailey played in the Dr McKenna Cup last year for Donegal, All-Ireland champions from four months earlier. He’s seen at first-hand the professional approach of that set-up. Harps have modest surroundings by contrast, but Mailey has been impressed by Horgan’s eye to detail.

He says: “After games, we always look back and talk about where we went right and where we went wrong. We pin-point different things and we ask ourselves what we can do differently. So far the mistakes, be it individually or collectively, have all been avoidable, so we need to cut those out.

“There’s no slacking with Ollie, no stone unturned. He goes through things in such detail, himself and James (Gallagher, senior coach).

“There are no excuses.”