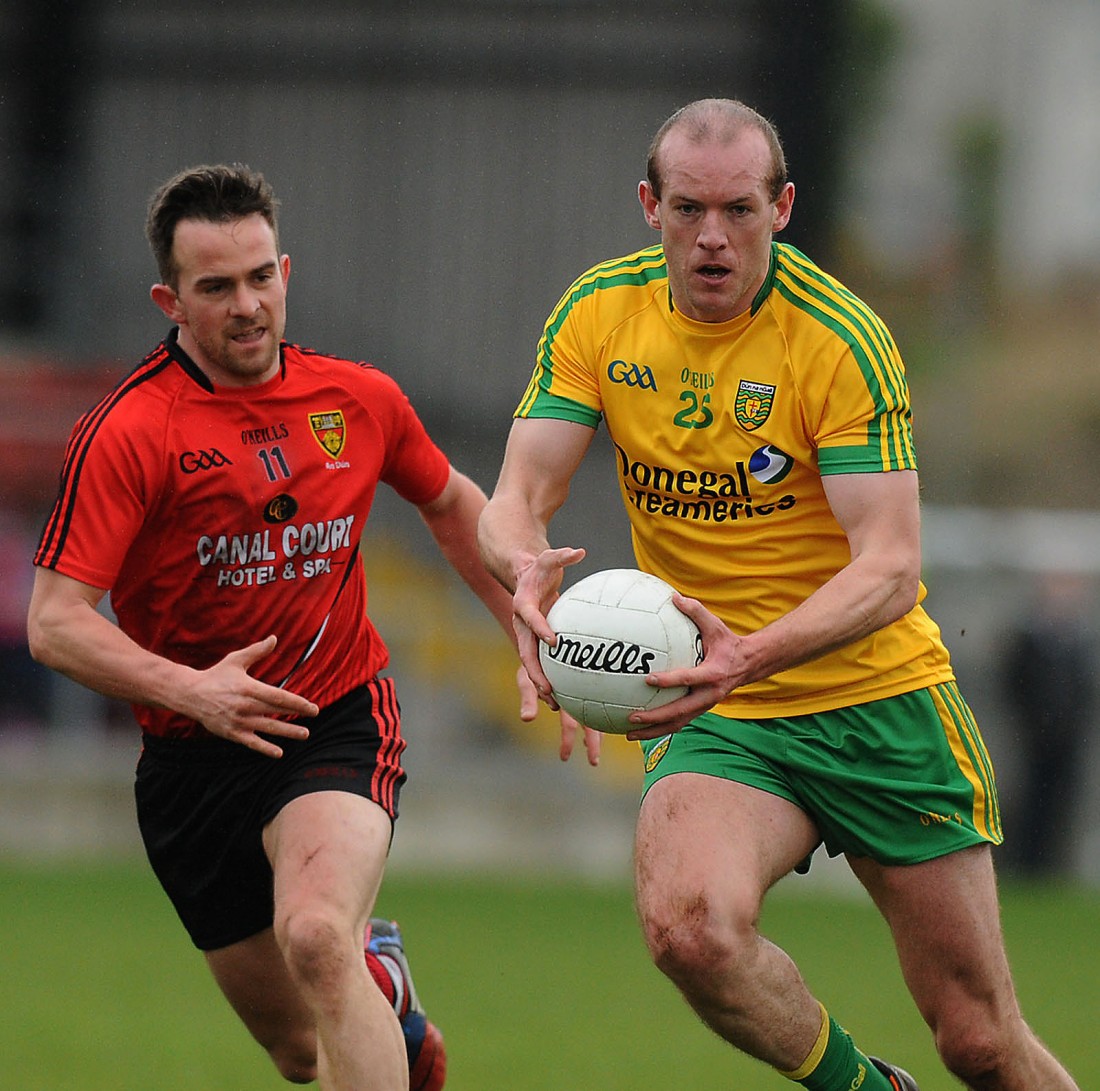 NEIL Gallagher has emerged as a major doubt for Donegal’s Ulster Championship opener with Derry in two weeks’ time.

The midfielder sustained an ankle injury during a training session with Donegal at Convoy on Friday night  and the 31-year-old Glenswilly man is regarded as a major doubt for the Celtic Park clash on May 25.

“He’s in a race against time,” said the Donegal manager, Jim McGuinness.

“Neil went over on his ankle in a tackling drill with Neil McGee. He just rolled his ankle.”

Doubts surrounding the availability of the 2012 All-Star mean Donegal face the prospect of going into combat with Brian McIver’s Oak Leaf side minus their All-Ireland winning midfield pairing from two years ago.

Rory Kavanagh is ruled out through a suspension following his red card in last month’s Division 2 League final defeat to Monaghan at Croke Park.

Patsy Bradley and Fergal Doherty, players McGuinness termed ‘two old warriors’, are expected to be at centrefield for Derry and the Donegal boss has likened them to Gallagher and Kavanagh.

He said: “They know the pace of a Championship game. They can control games. They are physical, good in the air and have got the experience in the back burner. If both of them are out, it will be a big challenge for us.”

Gallagher only started one of Donegal’s League games – the final day win over Armagh – this year. Having begun the year suffering from a knee injury, Gallagher’s progress was halted by, first, a hamstring injury, and then a groin complaint.

McGuinness was content with the fitness of the midfielder, whom he introduced after 28 minutes of the Division 2 final.

He said: “He has a right bit of work done.

“He got a lot more training. He surpassed his total number of training sessions from last year by February.. He missed 68 per cent of all training last year and we didn’t train as much as we’d have trained the previous year.”

Gallagher was on crutches while watching Glenswilly’s All-County League game against Termon at Pairc Naomh Columba.

Patrick McBrearty sat out Kilcar’s away draw at St Eunan’s having took a bang to an ankle, also on Friday night, but the forward’s injury is not said to be placing his participation against Derry in jeopardy.

Luke Keaney and Paul Durcan took no part in Four Masters’ game against St Michael’s, but their respective absences were also reported to have been precautionary.

Karl Lacey came through the full hour of that game, as did St Michael’s trio Martin McElhinney, Christy Toye and Colm McFadden.

Paddy McGrath got another sixty minutes under his belt in Ardara’s derby defeat to Naomh Conaill, a game that also saw the return of Leo McLoone after he missed the Division 2 final because of a calf injury, while David Walsh has recovered from a quad injury.

McGrath remains in a race to prove his case for inclusion against Derry, however, having just returned following an eight-month lay-off.

McGuinness said: “Paddy has been going very well in training. He has been able to train a lot, but he hasn’t been able to play or do dynamic movement. If we’re doing a longer run,  he’d win them all because he’s used to the straight-line running. He’s in good shape but doesn’t have a lot of game time under his belt. He’s getting that with us now.”