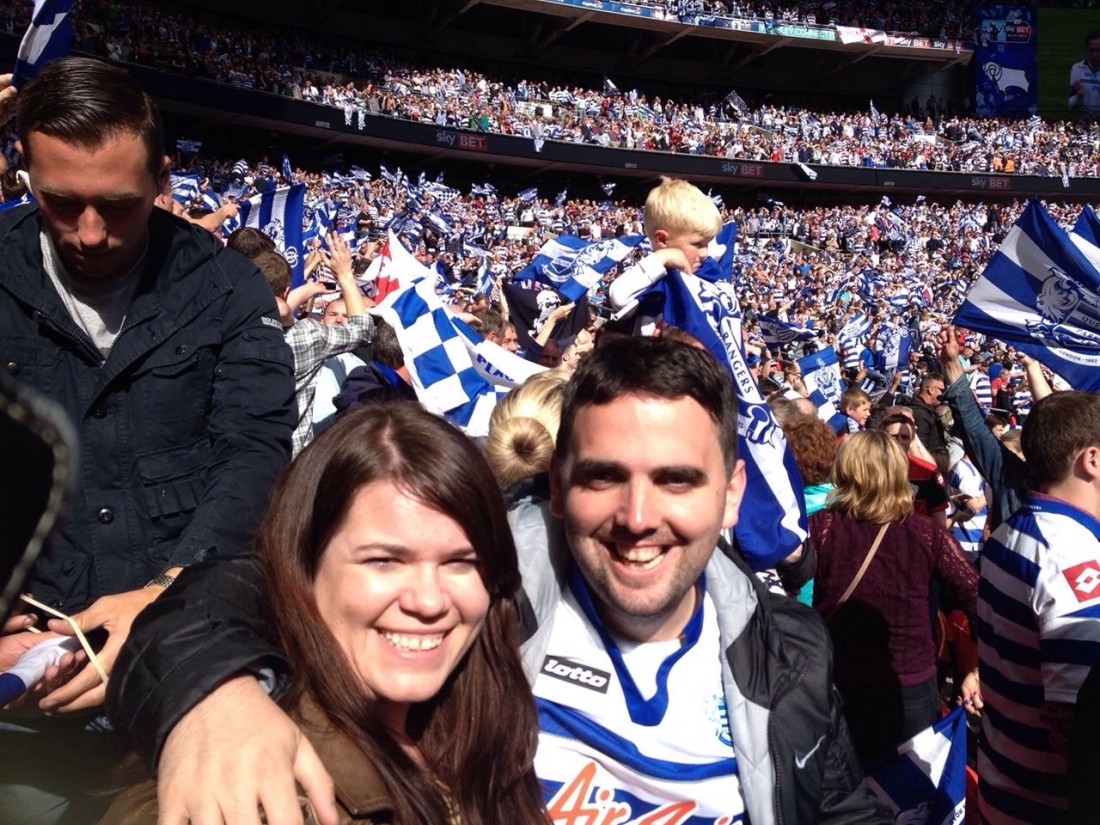 WHEN Bobby Zamora netted a dramatic 90th minute winner for Queen’s Park Rangers in Saturday’s Championship play-off final at Wembley, a Donegal man was among the ecstatic hoards toasting a famous win.

Donegal town man Conor McBrearty hasn’t had much luck when it comes to supporting his team in play-offs. His first love is Finn Harps, who have been beaten in five promotion play-offs in the last twenty years, but he is now based in London, where he works for QPR.

The 29-year old has been working with QPR in the Community Trust since August 2011.

“We are basically a charity, but we get funded by the club and my role is all around the area of disability and inclusion,” he told the Donegal News this week.

“I work a lot with people who have special needs and we do coaching of tennis, athletics, bocce and a lot of different sports.

“We would also do things like young mens’ mental health programmes and would work closely with health education departments.”

Based in west London, QPR have Fulham and Chelsea as close neighbours. Working mainly in the boroughs of Hammersmith & Fulham, Brent and Hillingdon, Conor works mainly with ten different special needs schools in the area, co-ordinating coaches to deliver programmes within the schools.

The old urges are still there and he gets involved in the coaching end too.

Under the direction of Seamus Campbell, he spent four years as a volunteer with the Special Olympics here and in 2011 he traveled to the World Games in Athens alongside Letterkenny man Daniel O’Donnell. A graduate from Letterkenny IT’s Sports Coaching course, he headed for London in search of opportunity.

“If I’d gone with the degree and just the degree, I mightn’t have had as much chance, but with the Special Olympics worked along with it I was boosted big time,” he explains.

“I had tried Manchester and Glasgow for work but didn’t get anything. I got an interview with QPR and was offered the job the next day. My role is funded by one of the shareholders (Ahmit Bhatia).

“I find that a lot of the kids wouldn’t do much outside of school, bar maybe whatever half-an-hour here or there they get in school.

“I set up a Special Olympics club when I got here, but it wouldn’t be as big as it is back at home.

“A lot of the work I do is dependent on the confidence of parents. Sometimes when parents are told their kids have a disability are like: ‘I can’t believe this’ and maybe they don’t want their kids to go to a special needs school or to come along to a disability session. But when they see what’s going on and the support staff we have, they’re amazed.”

Another Donegal native, Fanad’s Sinead Friel is working with the Community Trust, mainly doing work in drop-in centres. Donegal’s blood has run through the veins of Loftus Road for some time now. Kevin Gallen is a great of the club and has strong links to Ballybofey. His brother, Steve, is now Youth Development Manager.

With QPR back in the Premier League, Manchester United fan Conor is looking forward to big days again.

“Last time they were in the Premier League I was at the United game, but I still found it hard to shout against QPR,” he says. “We get tickets to the games and it’s great to be looking forward to the big teams coming back to the club again.”

He sees a lot of similarities between QPR and his beloved Harps: ‘We don’t win much, but they’re great clubs with great people involved in them’.

Last Friday between 7am and 9pm, around forty QPR fans – including Conor for a period of time – went to Wembley armed with 40,000 flags and elastic bands, to affix them to the seats in the QPR end. The result was a wall of blue and white ahead of the richest game in the world, the £134 million play-off final.

“That just shows you the kind of club we have,” he says. “I don’t think QPR will be in something like an FA Cup final anytime soon, so this was our chance for a huge day out in a Cup final, which is what the play-offs are.”

Derby County had the better of the play and QPR didn’t have a shot on target – until that famous, priceless Zamora strike.

Conor says: “We were under the cosh for a lot of it and we were just hoping for extra time or penalties. When they ball broke and Bobby put it in, the place just went mad!”