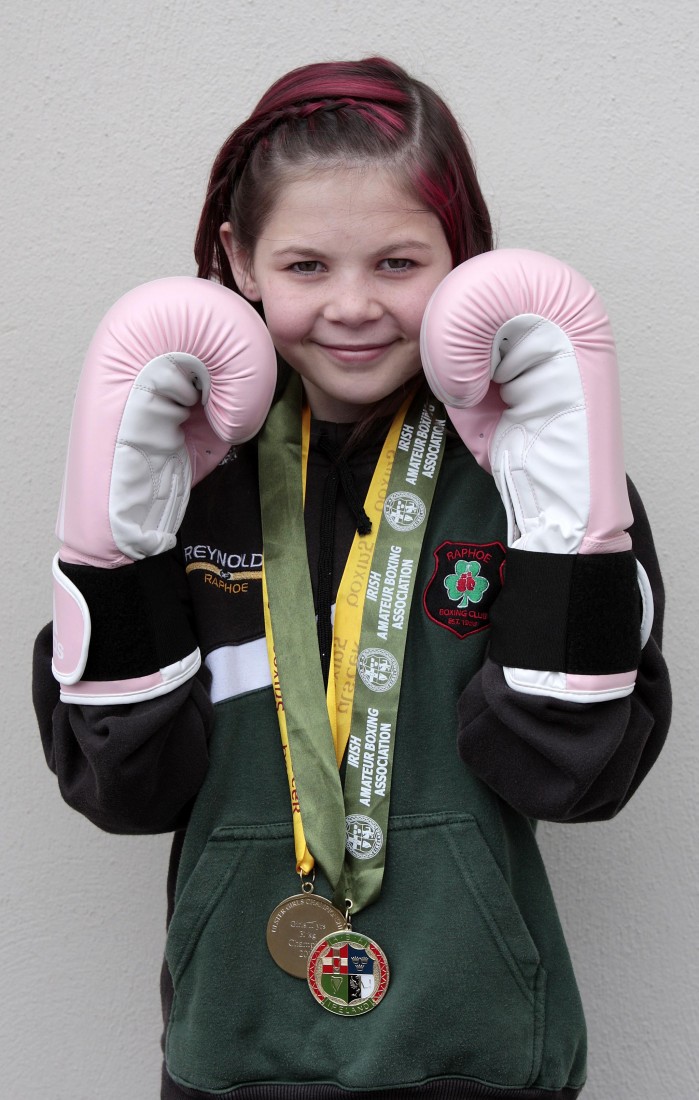 CODY Lafferty won’t forget her first experience of the National Stadium in a hurry.

The eleven-year old Raphoe ABC hotshot overcame Fiona O’Keefe from Rathkeale in last Saturday’s Girl 1 31kgs final. Having beaten Chloe Toal from Belfast in the quarter-final and Caoimhe Spillane from Kerry in the semi-final the previous week, Lafferty hit the high notes to win what was the seventh title of her debut season.

“I was delighted and very proud,” said the Ballindrait girl, a pupil in Mr Harvey’s sixth class at Murlog National School, on a visit to the Donegal News this week with Raphoe’s Mr Boxing, Peter O’Donnell.

“Coming out in the Stadium was amazing. It’s massive. There was a big crowd there too. I’ve been boxing for four years, but this was my first time competing.

“I was very nervous, but once I got into the fight it was ok.”

This season she broke through by claiming the Donegal Novice title in October and her star rose ever since with Donegal Open, 9 County Novice, 9 County Open, Ulster Championship and All-Ireland Championship honours following.

“Gary and all the coaches are a big help,” she said of club head coach Gary McCullagh and the club’s coaches John Sweeney, Stephen McBride, Paul O’Donnell and Marty McCallion.

She has been troubled by a knee injury of late, but she overcame that to defeat Alannah Mayes (Two Castles) in the Ulster final. Once the South Circular Road came into view she never looked back.

The encounter with Spillane has been her biggest test. She said: “The semi-final was the hardest fight. It was kind of like a wrestling match.

“I was more confident after winning it.”

Now taking a well-deserved break, she’s getting ready to head for the One Direction concert at Croke Park, courtesy of tickets got for her by the Raphoe ABC to mark her achievement.

Not only was this her first All-Ireland, but it was the Raphoe club’s first national piece of glory since Danny Ryan won the senior middleweight title in 1993. Head coach then was Tommy Stewart, who is now the Raphoe ABC President. “We’re all delighted for Cody and a great credit has to go to the coaches,” he said. “We send our sincere thanks to all the generous business people of Raphoe and the surrounding areas for their continued support. Without it, our club couldn’t exist.”

Cllr Frank McBrearty junior extended his best wishes to Cody on her success. “I would always encourage young people to get involved in sport,” he said. “Cody has shown what’s possible with dedication and hard work. I wish Cody and the Raphoe club every success in the future.”

MEANWHILE, the National Under-18 Championships get underway in Dublin this weekend with Finn Valley ABC’s Austeja Auciute aiming for her ninth national title. Auciute leads the Donegal charge that includes the likes of Michael McConigley, Aaron Doherty (both Letterkenny), Mark McCole from Dungloe, Terence Ward from the Bluestacks and another Finn Valley man, Francis Mongan.

ALL Donegal clubs wishing to affiliate for next season are asked to attend a meeting of the Donegal County Board on Tuesday night next, May 27, in the Letterkenny Gym at 8.30pm.