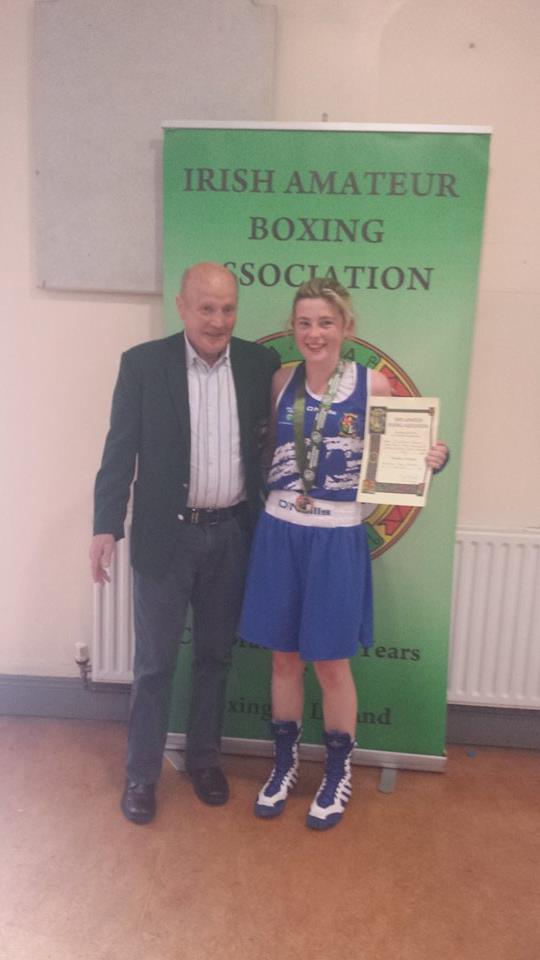 Twin Towns BC puncher Anderson and Raphoe’s dynamic Lafferty were two of the four Donegal victors in the National Girls 1,2,3,4 and Youth 1,2 Championship finals at the National Stadium, with Carndonagh duo Rachel Dixon and Labhaoise Clarke also claiming top spot in their divisions.

Fifteen-year-old Ballybofey woman Anderson took the spoils in the Youth 1 46kgs final. Anderson stopped Lauren Stewart from the Togher club in Kerry in the first round of their contest. In her first year of competition, Anderson has proven to be a chip off the old block – and the bloodlines have carried the family ways for the young St Columba’s College student.

Forty-nine years ago, in 1965, Brian Anderson senior boxed at The National Stadium for the last time to win an Irish welterweight title. A year earlier, he had competed in the 1964 Olympic Games in Tokyo. On Saturday, he was introduced into the ring and got an ovation from the big crowd.

Later in the day, following Ciara’s emphatic first round demolition, the great former boxer was asked back to do the honours of presenting a first National title to his grand-daughter in an emotional family moment that will surely become an iconic image in the Anderson household.

In Raphoe, they could have been singing renditions of the old melody ‘21 years is a mighty long time’ after Ballindrait girl Cody Lafferty powered her way to her first national title. The eleven-year-old Raphoe ABC star has only been boxing competitively for little more than six months – but on Saturday she won the Girl 1 31kgs final, defeating Rathkeale’s Fiona O’Keefe.

The Murlog National School pupil has now won every championship she has entered, this the seventh title of a stunning breakthrough season. Laffery has been suffering from a knee injury of late, but there was nothing to stop her once the National Stadium came into view. On Saturday, she landed some stiff jabs on O’Keefe and it was one-way traffic for the duration. 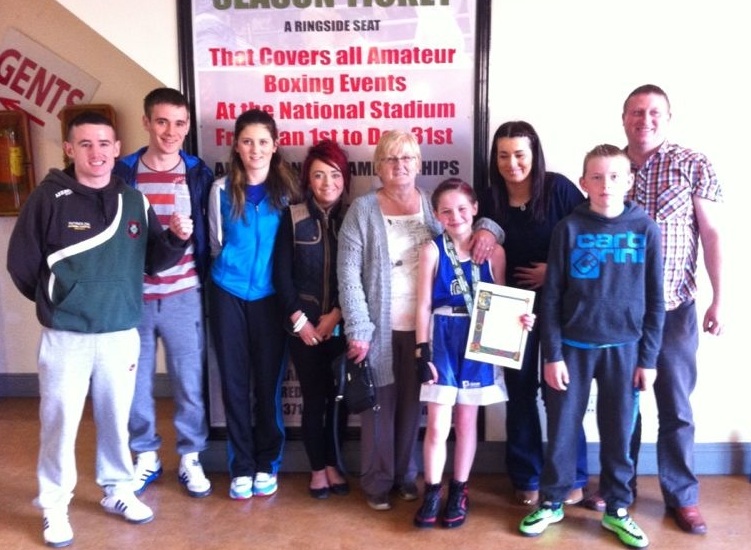 In winning the national title, Lafferty became the first Raphoe ABC boxer to win a national title since Danny Ryan famously won the Irish senior middleweight title in 1993. The likes of Stefan Brolly and Joe McCullagh came close over the years, but now in Lafferty the club gym in St Eunan’s Terrace has another national title to toast.
Carndonagh was celebrating on the double, meanwhile.

Laobhaoise Clarke’s star just keeps rising and a unanimous decision win over Erin Heneghan of Aglish, Mayo secured her fourth Irish title, taking the honours in the Girl 4 54kgs final. She has now won titles at Girl 1, 2, 3 and 4 levels and this was another dominant display from one of the best up-and-coming boxers in Donegal.

Carndonagh was also toasting victory for Rachel Dixon, who defeated Bobby Hendrick (Sacre Coeur) on a split decision to win the Girl 2 57kgs crown. Her twin sister Chantelle bowed out at the semi-final stage last weekend.

Niamh McCole of Dungloe put up a good showing against European ace Amy Broadhurst from Dundalk, but there was no luck for the Donegal girl as Broadhurst took a 3-0 win in the Youth 2 60kgs final, a battle of two southpaws.

Illies Golden Gloves boxer Mairead Dobbins was beaten 3-0 by Gilford’s Clodagh McCommiskey in a Youth 1 50kgs final that was a repeat of the recent Ulster final won by Dobbins.

Jessica Clarke made the Girl 3 44kgs decider, but was edged out by Katelyn Friers from Immaculata in Belfast on a split decision, while Twin Towns girl Jodi Lafferty put up a good performance, but was beaten by Angela Costello (Geesala) in the Girl 2 52kgs final.