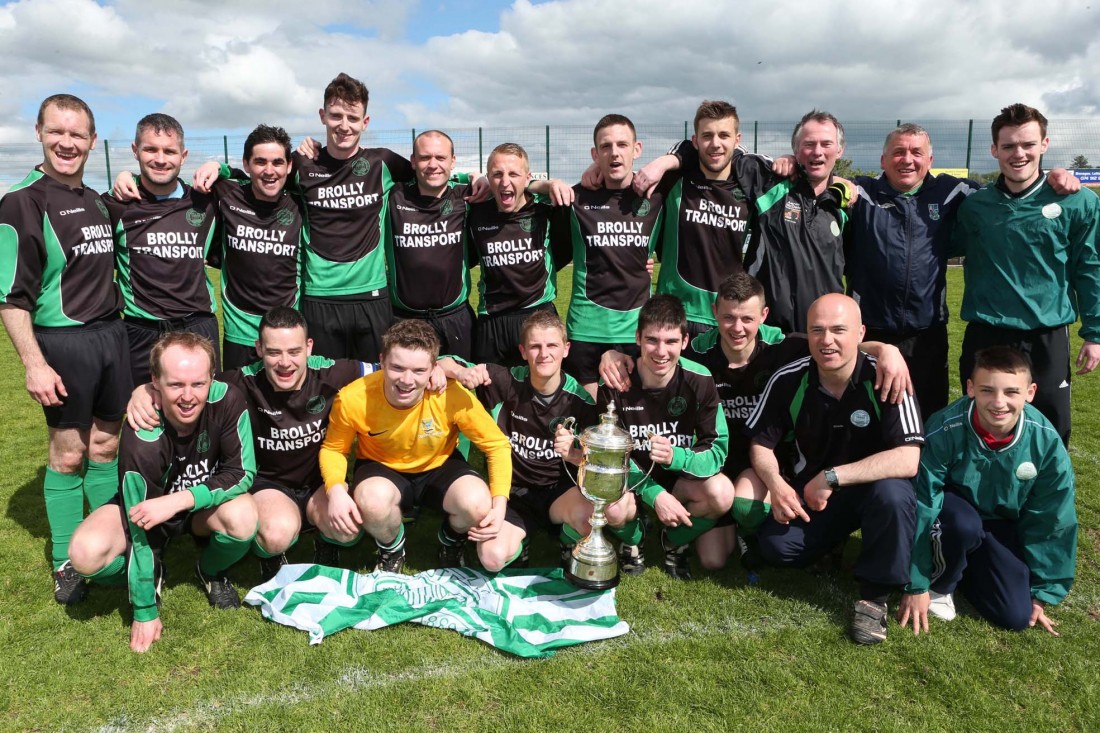 THE euphoric celebrations said it all.

Castlefin Celtic left it as late as could be, but JP Malley’s last-gasp winner finally uncorked champagne that had been on ice for an age around Park View.

Nine-man Milford United were flailing, the ninety minutes and additional thirty had failed to separate the sides when Malley conjured a moment of magic. The clock was in red time when a hopeful punt upfield was flicked on by substitute Anthony White.

The eagle-eyed Malley had peeled off and his instinct snatched the winner as he curled a sumptuous effort into the top corner, giving goalkeeper Caolan McGettigan no chance and leaving Milford broken.

“To score the winner so late was a great feeling,” said Joe McGee, Castlefin’s joint manager with Seamus Kee.

“JP is a cool finisher – he took it very well.

“It was a huge day for the club; a fantastic occasion.”

The triumph bridged a gap that was ever-widening to those late moments of the 1996/97 season when Castlefin Celtic won the Division 1 League title.

McGee himself had played on the side that won the Donegal region of the FAI Junior Cup in 1989, but Sunday’s was as special as any of them on a weekend that saw the village decorated in the green and gold colours.

McGee said: “It’s a great Cup to win – it’s one of my favourite competitions. I’d never won it before either. It’s a fantastic feeling.”

Twelve months ago, the mood was gloomy. Relegation from the Premier Division was a bitter pill but Castlefin set about bouncing straight back.

Their endeavours in that regard fell just short, having lost a promotion-relegation play-off to Cranford last weekend.
Drumoghill and Cappry Rovers pipped them to the automatic promotion spots, but their Cup run maintained the sense of purpose to the campaign, even after their agonising play-off loss. With the seconds ticking by on Sunday, another piece of spot-kick lottery looked inevitable.

McGee said: “With a minute to go and after losing a shoot-out the previous week, the last thing we wanted was another one. It was in the back of our minds.”

Premier Division Milford hit the front through an early Gary Merritt free-kick, but when Malley netted the equaliser after 35 minutes it was game on. Milford lost Ciaran McGinley and Damien Casey to red cards in the second half and Castlefin upped the ante and were determined to give their supporters something to cheer. The club’s Saturday League team were pipped by Glenea in the Downtown Cup final the previous day.

McGee said: “We never panicked. I had a feeling that we’d equalise even though they scored so early.

“We were playing well.  We were very unlucky against Cranford last week, but we kept at it and the boys just kept trying to play football. I knew we could dig ourselves out of it.”

McGee hailed his joint boss Kee and their right-hand man, Pat Molloy. They’ll be back at the controls next year again.

“We’ll aim to go one better in the League next year,” McGee said. “It was a successful season. Drumoghill and Cappry were better than us in the League, but we gave them a run all the way.”

Emmet White had an outstanding season and was aided by captain Kieran Brennan, Simon McGlinchey and Sunday’s two-goal hero Malley. Barry Tourish’s participation was restricted this campaign, but McGee hopes to have the ex-Finn Harps striker on a more regular basis next year.

Their panel has plenty of youth, including their sixteen-year old goalkeeper Anthony O’Hagan, whose performances have belied his date of birth.

In many ways, next season has already begun around Castlefin.

For now, though, they savour the moment. As Kee put it: “We’re delighted to get a trophy after that season. You think of all the mucky pitches and the dark, wintry nights – it’s great to have something to show at the end of it.”