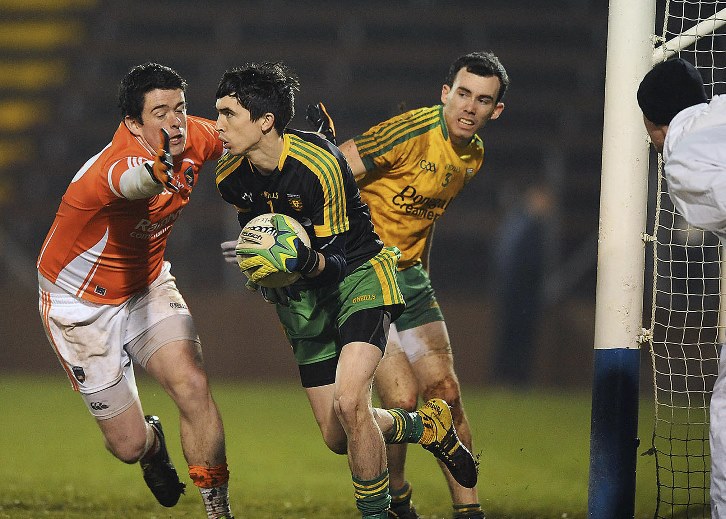 Donegal Under-21 goalkeeper Joe Coll in action during last week’s semi-final against Armagh.

MAXI Curran mentioned recently how seven of the players he sent into battle with Fermanagh three weeks ago had no previous experience of the rigours of inter-county championship action.

Of those, Joe Coll’s is perhaps the most compelling story of all.

Coll is set to line out in Wednesday’s Ulster Under-21 Championship final, in what will be only his third ever Championship match in a Donegal shirt.

Indeed, Coll muses that in the last five years he’s not played many more games of Gaelic football at all.

In July 2012, the Meenlaragh man, two years into a three-year contract at Manchester United, made a brave call when he knocked on a door at Carrington and informed Dave Bushell, the head of education at United, that he was quitting because of a lack of opportunities.

He left United on the same day as Michael Owen.

When a period around clubs on trial didn’t yield anything, Coll returned and joined Derry City, but he bid the Brandywell adieu late last summer.

In August, his phone buzzed one evening and the call took him by surprise.

“It was a bit of a leap of faith by Maxi…He came to me and asked if I’d go in so I took up the chance,” Coll says.

“It took a while to adapt. I’m enjoying the experience. It’s all new to me. I’m learning every day I go out.

“I’m enjoying it. It’s definitely a different experience. There is a great bunch of lads here and we’re all putting in a lot of hard work.

“I always played outfield in Gaelic football before. It had been a while since I played. I played a game last year, a reserve game for Cloughaneely against Glenswilly. Before that it was ages since i played at all.”

Coll still plays a bit of soccer with his native Glenea United ‘when I can’ but these days he’s devoting his time to Donegal’s bid to wrestle the Ulster Under-21 title from the clutches of Cavan.

He says: “This is such a good chance for us. I want to give it my all.”

When he joined up with the Donegal squad, he got a bit of a shock to the system. This was a man who’d played most of his Gaelic football as a midfielder for Cloughaneely and who remembered the goalkeeper as the player who ‘stood on the line and didn’t do much more’.

“Now, the goalkeeper is way more involved,” he says.

“There is a lot more in the way of communication involved. It ties in nicely with what I’ve been doing anyway. It’s really about shot stopping and then keeping the defence organised to a tee.”

One of the features of Wednesday’s semi-final win over Armagh at Breffni Park was the huge, booming kick-outs of Coll, often reaching well over the midway point. At a time when Armagh were beginning to ask the difficult questions, they were key to Donegal retaining the upper hand.

“Kicking is probably the biggest change I’d find from soccer. The ball is heavier and you’re kicking off the tee.

“The other one is the high balls: In soccer they’re dropping in from crosses and you have to just compose yourself to catch them whereas in Gaelic football it’s rising stuff the whole time. Having a lot of high balls being pumped in does get some getting used to at the start, but I’ve been happy with how I’ve come on.”

Coll’s name hit the headlines in January when he got a late call-up to travel with an Irish squsad to the FIFPRO tournament in Norway, for out-of-work players. Coll’s performances were one of the highlights of the tournament.

“It was something different to do,” he says.

“I was playing with boys who were looking to get a job. They had much more at stake than I had. I was out to enjoy it and I did – it was a good experience. Peter Enckelman played for Finland and there were a lot of men playing who had senior caps.

“I got the call late to go to Norway. I knew absolutely nothing about it. I got a shout the day before it. I was meant to be training with the Donegal Under-21s the following night, so I rang Maxi and he had no problems with it.”

Having left his homeland at a tender sixteen, he had left school early, but he’s now almost finished the first year of the two-year Leaving Certificate cycle at PCC, Falcarragh. Coll enrolled in the school again to finish his secondary education.

“I came back to do my Leaving Cert and I’m happy now that I went back to do the two years,” he says.

“It wasn’t too hard to go back. I knew that I would have nothing without it. I knew what I had to do. It’s better than sitting around doing nothing. I’m enjoying it. This year is nearly over now so I’m happy that I’ve gone back for the two years.”