Swilly Rovers held on narrowly after first half goals by Conor Gormley and Ronan Docherty got them through to a semi-final spot with top schoolboy club St Kevin Boys from Dublin after Midfielder Diarmuid O’Connor halved the deficit for the Kerry side down in Listowel.

The Ramelton side started slowly and on 6mins, Swilly netminder Dane Dunworth pulled off a super save from midfielder Kennedy.

On 18mins from a Shane McNamee corner a goalmouth scramble occurred and Conor Gormley slotted to the net for the lead. It was all swilly now and Ronan Docherty scored from 3yds after a free kick by McNamee was hit into the area. McNamee himself could have made it three only for the Kingdom keeper McKivergan to save well.

Swilly were keeping their shape well with outstanding displays all around the field. The 2nd half started with the Kerry team pushing more forward and great defending from the back four and another amazing display by Dunworth in goals kept the two goal margin.

Midfielder O’Connor scored with 17mins left to set up a very nervous ending for McNamee’s team. With the Kingdom Boys pushing high up the pitch, they started to leave gaps in their defence and from a sweeping move involving Toye, Hanlon & McNamee who sent Cameron Gormley through on goal but the diminutive winger shot narrowly wide.
With 8mins remaining McNamee went through on goal and was taken down by the Kerry side’s keeper for a penalty.

With the striker injured, up stepped Conor Gormley who sent the keeper the wrong way but just wide. The Kingdom Boys threw the kitchen sink at Swilly and McKelvey cleared off the line with Dunworth beaten.

With seconds remaining, the team from Tralee won a free kick on the edge of the area and Irish International Rian O’Sullivan sent the ball high into the top corner only for Dunworth to make a magnificent save to push it out for a corner. With the Referee indicating that this was the last play, the resulting corner was cleared and Swilly got through to the Semi-Finals. 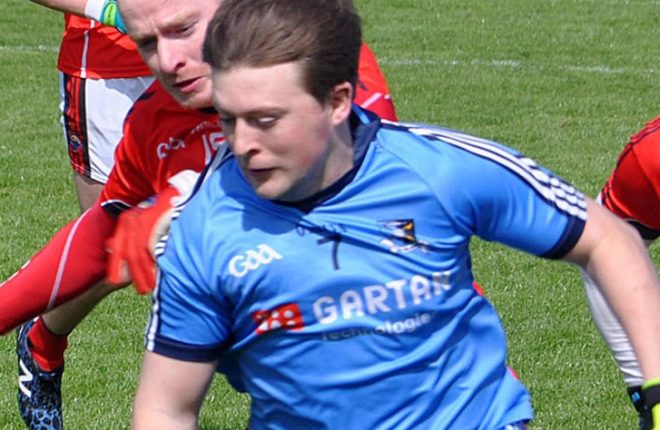 McNamee aiming for victory on the GAA field

TONY McNamee could have been preparing for a big game with Finn Harps this weekend, but instead he will...

Mailey and McNamee fire Harps to victory over Longford

Goals from Josh Mailey and Tony McNamee helped Finn Harps to a comfortable victory over Longford Town at the...

McNamee brothers to face off for second time on Friday

It will be an interesting week for one Ramelton household, as Friday night's eagerly-awaited clash between Finn Harps and...