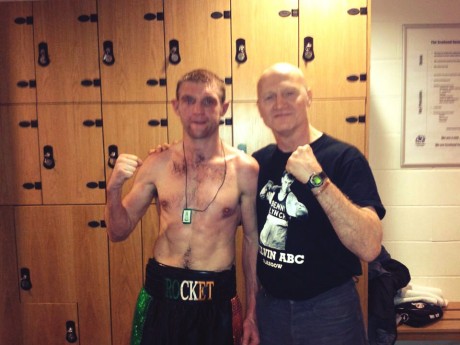 SHAUN McShane was remaining upbeat after suffering a narrow defeat against Marek Laskowski in Paisley on Saturday night.

The Dungloe man was competing in his second pro fight, having beaten Ryan Love in February.

McShane put up a good performance, but fell to a 58-56 points defeat to the Glasgow-based Polish fighter.

The light welterweight contest brought together two boxers with previously unblemished cards, McShane still a rookie having had only one bout, that win over ? at the start of the year.

Laskowski proved a frustrating opponent for McShane, who struggled to pin his man down.
McShane was the more impressive boxer for most of the contest, with Laskowski visibly fading towards the conclusion of the six rounds.

However, Laskowski had done enough in the early rounds to take the win on a night that saw ‘Iron’ Mike Towell crowned Scottish light middleweight champion thanks to a win over Rhys Pagan.

McShane is now targeting a return to winning ways in June when he takes part in a card that is expected to feature on BoxNation.

“I was in there to fight, but he (Laskowski) was there to spoil,” McShane said after what was a hastily-arranged fight. “We were told he was an orthodox, but he boxed southpaw.

“I’m not too bother. All I took was a clash of heads. He looked the busier, but was holding a lot and didn’t get a warning. It was frustrating – even the crowd were getting frustrated.

“That’s just boxing and you have to move on.

“I’ll have proper preparation now for the fight in June. You’re better to learn from a defeat than learn nothing from a win.”