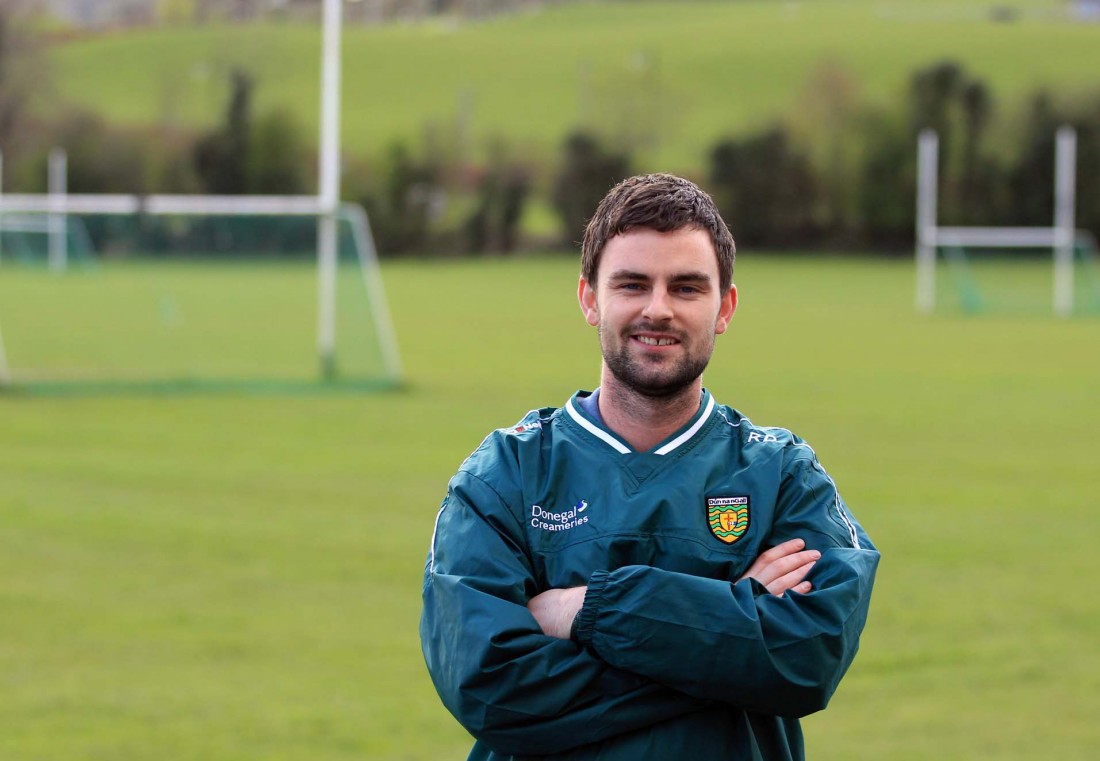 THIRTY sample bottles sit atop the table in the middle of a dressing room at O’Donnell Park, Letterkenny, each marked with a set of initials.

The Donegal minor footballers have arrived for training. ‘Jeez, Ronan’s here – what’s he at tonight?’ wonders one of them after disembarking the bus.

Sports nutritionist Ronan Doherty has set up station for one of his random nights of testing, which take place roughly once every three or four weeks, the team manager Declan Bonner calls in the Buncrana man to assess his players. The players are oblivious. Their first knowledge is when they turn up.

Upon arriving, they’re instructed to provide a urine sample.

As they drift off into the evening and out for the training session conducted by Bonner and Sean Noonan, the coach, Doherty goes through the bottles one-by-one – marked to identify each individual player.

Carefully extracting a sample using a pipette and wearing a pair of blue latex gloves, Doherty holds up a little handheld device; ‘An osmometer’, he nods.

“We use this to test how hydrated the players are.

“It shows how prepared they are for training. Obviously, if they are dehydrated they can’t perform at their best. It shows how seriously they’re taking it and also gives us an indication of what they’ll be able to do.

“If players are taking care to hydrate properly then you can assume that they’re resting enough, that they’re preparing properly, that they aren’t over-training.

“This is a good, quick measure. As soon as you put the sample on, you get an instant reading.”

By day, he’s a lecturer in sports coaching and performance at Letterkenny Institute of Technology; by night and by weekend he is a freelance sports nutritionist, working with a number of teams on an ad-hoc basis.

He did an internship in the High Performance Unit of the Irish Boxing Team and is working with Paralympics Ireland and the Irish senior ladies hockey team.

Last year, he advised the Donegal Under-17 and Minor teams, but admits he was just ‘dipping my toes in and out’. Now, though, he’s an integral member of Bonner’s backroom team.

Players file in and set their bottles on an ever-growing bunch on the table.

“What we’re looking for as a general rule on a day like today – when the boys haven’t trained the night before – is a reading of under 400,” he says, putting the osmometer into action.

“Under 400 is properly hydrated, 400-600 means they need to drink a bit more and we’ll monitor them during training. Anyone over 800 is severly dehydrated.

“I’ll analyse all their results and send them to Oisin (Cannon).

“It’ll all go out to the players then for them to get a look at their personal performances. There is a huge amount of work in collating the data, a serious amount of background work.

“It’s unreal, the professionalism. Everything that is been offered to these boys is second to none – compared to any team that I’ve worked with.”

Tonight is hydration, but he has put this group through several other in-depth tests and will be back again before their Ulster Minor Championship game against Derry at the end of May.

He says: “They have been fitness-tested and we’ve had them in the IT a few times. We have been very lucky to get the sportshall and the facilities out there.

“We did baseline measures a few weeks ago and they’ll be back again to be re-assessed before the Championship.

“We’ve looked at their agility, their strength, their core strength, their power. We have an overall picture of where they’re at. That’ll tell us if the training is working. I’ve no doubt that it is. You can see it in the boys. Since the start of the year they’re unrecogniseable.

“At the start it was all like: ‘What’s this boy at?’ They’ve all started to buy into it. Some of the results at the start were the worst I’d seen, but now they’re among the best. They take everything on board. They’re always asking questions, always looking at their scores. They don’t take anything on board without asking about it.”

A Professional member of the Irish Institute of Sport, he started off as a hopeful P.E teacher at St Mary’s training college in Belfast, before moving to complete his Masters in Bristol. Having worked as a researcher in UCD before returning to Donegal eighteen month ago to take up a post as a lecturer in LyIT.

The Donegal minor squad complete daily diaries which are used to analyse their sleep patterns, diets and their routines. These diary entries are uploaded and management can view them.

“By looking at the diaries we can see if they’re following the guidelines,” Doherty says.

“It’s not one size fits all. It’s about getting the key messages and tailoring them to fit each player. We have managed to do that very well so far.

“The diaries mean we know how much and of what they’re eating as well as the amount of rest they’re getting. We can look at every aspect of them. Provided the boys complete it properly we can go down to pretty definite detail on them. With all these measures in place we can get a very good track of where they are.

“There are ways and means to do it more accurately, but in terms of practicality, what we’re doing is perfect to see where they are.”

When he gets the chance, he turns out for Buncrana in Division 3 of the All-County League. His twin bother, Odhrán, has played for the Donegal senior team.

By the end of the 2014 campaign he hopes to get access to GPS-tracking machines.

He says: “There are three things that will affect the peformance: Training and conditioning; genetics; nutrition. If you don’t get that right, no matter how hard you train, you won’t perform. All the support they’re getting is really important.

“We’ll re-test them all before Championship. It’s about getting them to peak at the right time.

“Everything is set up for them to peak at Championship time. That’s what it’s all about.”

Tonight, with the latter stages of the League in sight, the samples are all given a nod of approval.

“They’re all in good shape. They’re all taking really good care of themselves now and they’re always asking about their ‘scores’ – it’s like a competition at times. They probably feel they have to take it seriously because they never know when I’ll turn up here.”