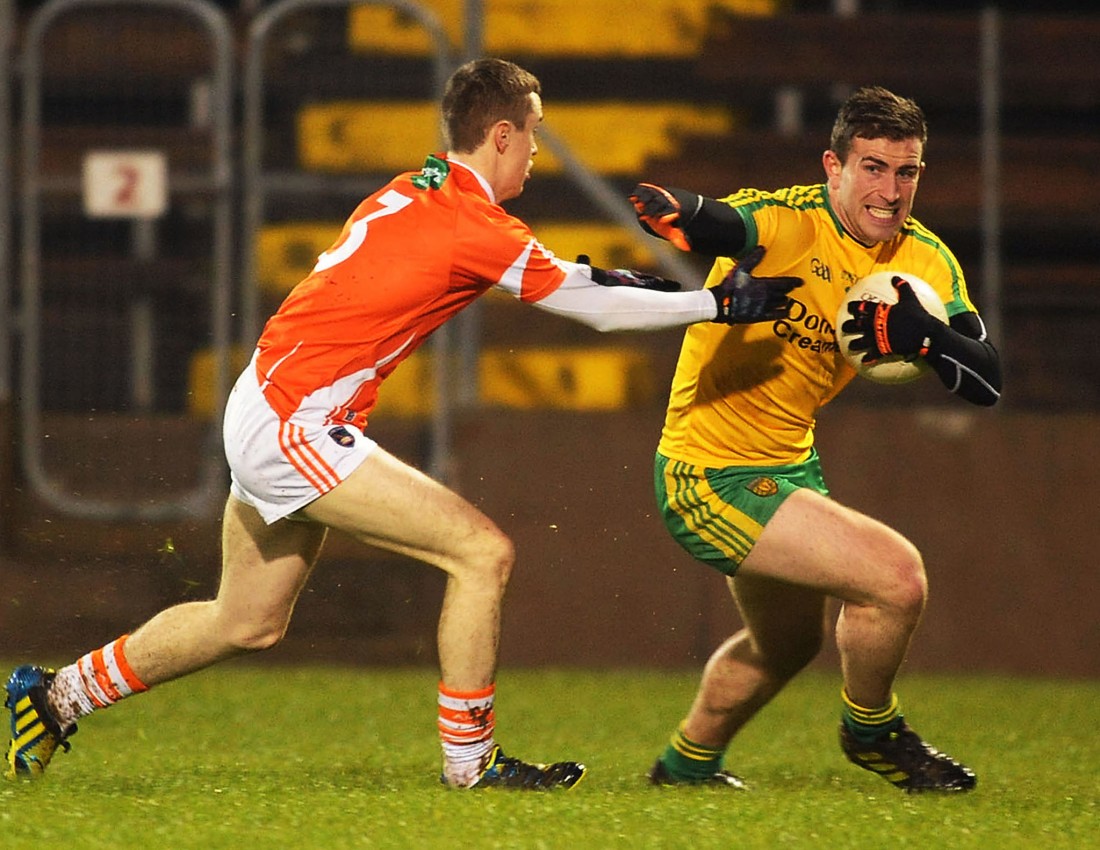 EIGHT points from captain Patrick McBrearty gave Donegal a hard-earned passage into the Ulster Under-21 final at Armagh’s expense in Cavan.

Maxi Curran’s men were pushed all the way by the Orchard, but with seniors McBrearty, Ryan McHugh and Martin O’Reilly on form, Donegal had too much.

McHugh opened Donegal’s account with only twenty-two seconds on the board, although he was entitled to his head-in-hands reaction given that he’d found himself with a sight of goal only to opt for a high-rise effort.

Three times in the opening ten minutes Donegal led, with McBrearty on the mark with two, but Armagh responded each time through Michael McKenna, Joe McElroy and Ciaron O’Hanlon.

Donegal began to take charge and a 40m free by McHugh gave them the kick and by the 23rd minute they were four ahead with McBrearty hitting another pair of sumptuous scores.

The pick of his night’s work came in the 19th minute when, facing away from goal and with Seamus Kelly in hot pursuit, the Kilcar man landed an over-the-shoulder point.

Armagh had been dealt a hammer blow when senior player Ethan Rafferty was forced to withdraw injured in the build-up.

Even without him, the Orchard had a foothold around the middle, but it was Donegal who had the 0-7 to 0-4 lead at the changeover.

McKenna, Callum Cummiskey and Paul McGeown helped bring Armagh back to within a point, but O’Reilly, McHugh and McBrearty steadied the Donegal ship with scores.

Darach O’Connor – unable to start because of a hamstring injury – was summoned and but for his feet sticking in the glue-pot surface the Buncrana man could have had a green flag hoisted.

McBrearty and O’Reilly pushed Donegal four up and, even though O’Hanlon did bring Armagh within a goal again, the cherry was placed by O’Connor with a fabulous last-minute score.

It was a night where the game was in the melting pot for longer than Donegal might have wished and a night where they could have had victory copper-fastened long before O’Connor’s late score, with three goal chances passed up over the course of what will be reflected upon as a useful hour at the office ahead of a rematch with Ulster Under-21 kingpins Cavan next week.