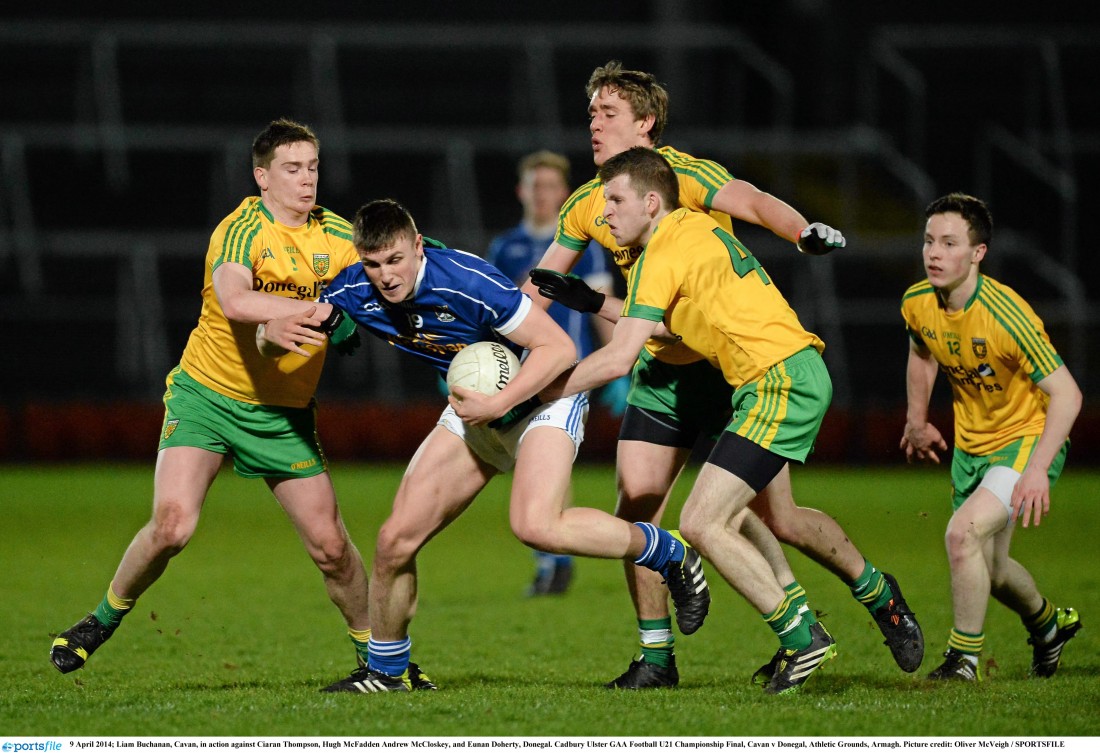 BY CHRIS MCNULTY AT THE ATHLETIC GROUNDS

JUST when they seemed to have done enough to win it, Donegal’s Under-21s were hit by a killer late purple patch by Cavan in the Ulster Under-21 final at the Athletic Grounds.

Maxi Curran’s side led for the first time in a low-scoring game when Ryan McHugh hit a magnificent point six minutes from the end and when Eoin McHugh brilliant drove over to open up a two-point lead Donegal began to dream.

But Cavan, the masters of this grade who were appearing in their fifth Ulster final in a row, broke Donegal hearts hitting a goal and three points in the final four minutes of play to seal their fourth title on the bounce. The last game they lost in Ulster was the 2010 final to Donegal.

A Kevin Bouchier free was their only point for twenty-nine second half minutes as hard-working Donegal swung the pendulum.

From the kick-out following Eoin McHugh’s point, Cavan summonsed the perfect response. The chance appeared gone, but Peter Reilly’s side drove through and Liam Buchanan fired a dramatic goal past Joe Coll. How Donegal must wish they’d stopped Buchanan in his tracks by whatever means were necessary.

With Michael Argue, Joe Dillon and Barry Fortune on the mark, Cavan showed the qualities that have brought dominance at Under-21 level to seal a remarkable win and gun down brave Donegal’s charge.

A cagey opening quarter had just two points, frees at either end from Bouchier and Patrick McBrearty, although Cavan delivered a warning shot when they worked a seventh-minute goal chance, spurned by Dara McVeety.

Cavan took control when Gerry Smith launched a hopeful Hail Mary into the danger zone. Dillon just got an inch ahead of Daragh Mulgrew and Conor Parke before nipping in to fire high into Joe Coll’s goal.

With sides lining up defensively, the fare wasn’t pretty and in such claustrophobic surroundings the goal felt like it carried a little more weight.

Willie Gillespie pulled one back for Donegal, but another free by Bouchier, which just about creeped over, gave the Breffni boys a 1-2 to 0-2 interval lead.

Donegal headed for the dressing rooms feeling a little fortunate to have been within a goal after a wasteful first half in which they conceded possession much too cheaply and much too often.

Cavan made two changes from their semi-final win over Monaghan, with Brian Sankey unable to start at midfield having suffered a broken hand. Buchanan took the station alongside Michael Argue, while Dillon reclaimed his position in the full-forward line, at the expense of Tom Hayes.

Cavan hit six wides in the opening half, but they were dealt a blow when centre-back and captain Conor Moynagh was black-carded for an incident involving Eoin McHugh that was brought to Cathal O’Hagan’s attention by the linesman Barry Cassidy.

Donegal were back to within a point when McBrearty curled over a 43rd minute free, well won by Darach O’Connor who had four Cavan men for close attention.

Having played the last eleven minutes of the semi-final win over Armagh, O’Connor was included from the off with John O’Malley the unfortunate party to make way.

The Tir Chonaill men might’ve been level, only for the upright to come to Cavan’s rescue as Gillespie went in search of parity. With the post trembling, it was into Cavan hands the O’Neill’s landed.

McBrearty and McFadden had posted scores for Donegal in the early moments of the second half and with Donegal keeping a tight lid they had done just enough – right until they were caught by Cavan’s stunning late flurry.