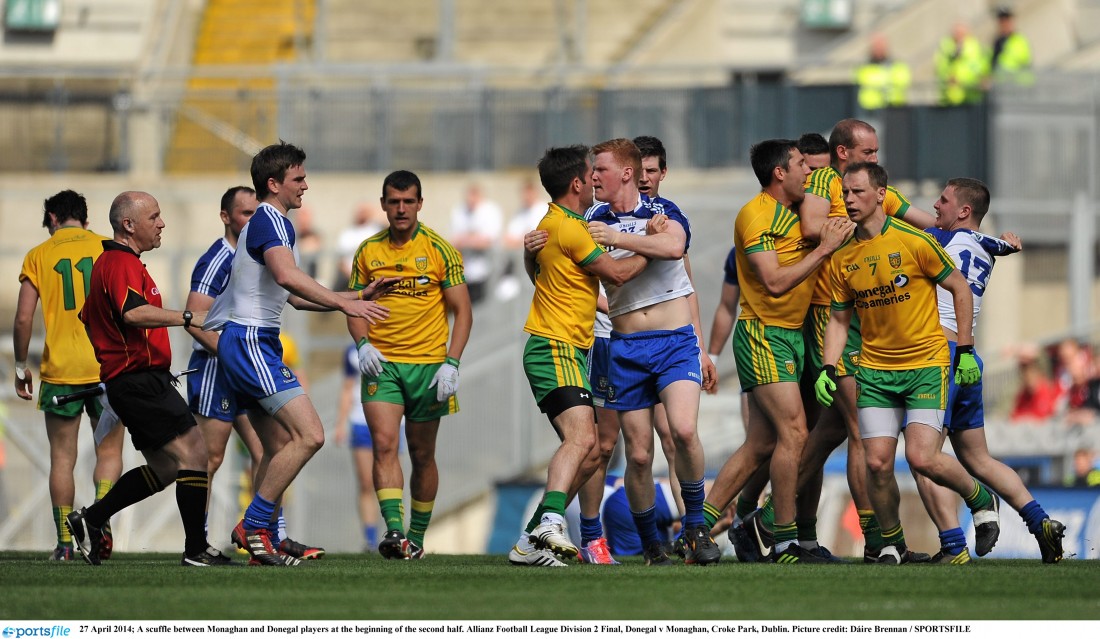 A scuffle between Monaghan and Donegal players at the beginning of the second half.

THE most concerning aspect about this game was that it showed that last year’s Ulster final was no once-off.

Monaghan are the deserving Division 2 champions and Malachy O’Rourke’s team was in no way flattered by their six-point winning margin of a game that leaves Donegal with some deep concerns a month out from their Ulster Championship opener in Derry.

In many ways this was a more emphatic win for Monaghan than they’d enjoyed on that sweltering Sunday in Clones last July. Although Donegal levelled the game through a Michael Murphy penalty in the 50th minute, they managed only two more points over the final twenty minutes.

It was a performance that Jim McGuinness considered afterwards to have been his side’s ‘worst performance of the year’. Donegal were greatly inhibited when Rory Kavanagh was sent off in the 41st minute. Kavanagh was given a straight red card for his part in a peculiar incident with Monaghan’s Darren Hughes. Kavanagh lost a boot that was kicked away by Hughes and once Kavanagh got it into his hand he put it to the groin of the Monaghan player, whose theatrical reaction didn’t aid Kavanagh’s cause any.

A player of Kavanagh’s experience might be expected to refrain from engaging in such incidents and it was disappointing especially given that it leaves Donegal devoid of the in-form St Eunan’s man for the Derry clash.

“It’s something we could have done without. He has lost his discipline,” McGuinness observed afterwards.

Murphy restored parity for Donegal when he thumped home a penalty, awarded by referee David Gough following a consultation with his umpires. Colin Walshe was deemed to have committed a foul on Ryan McHugh and, although the replays showed the Donegal man to have been outside the area the referee’s outstretched arms handed Murphy a chance.

The captain obliged with the finish, but a man down Donegal were always facing an uphill task. Donegal might’ve had the stiff breeze driving at their back for the second half, but the wind was in Monaghan’s sails.

Conor McManus drilled over a super point to put Monaghan ahead and the Farney men were on their way to a second League title in as many years when Kieran Hughes palmed past Paul Durcan following a sweeping and ruthless move that exposed the chink in Donegal’s armour made by Kavanagh’s sending off. Monaghan surged forward with intent and when Hughes converted the blue and white ribbons could be knotted.

They surged through in a manner reminiscent of the Ulster final last year when they stunned then reigning Ulster and All-Ireland kings Donegal.

Dick Clerkin, so effective after coming on for the injured Eoin Lennon, drove over to open up a four-point lead while the excellent Fintan Kelly teed up Chris McGuinness and his clever shimmy set him up for a fine score. Corner-back Kelly got in on the act himself while captain McManus placed the cherry with Donegal’s groans lifted only briefly by consolation scores by Murphy and Colm McFadden, who was black carded in added time.

Donegal lined out with ten of the starters from the 2012 All-Ireland final and when Neil Gallagher and Mark McHugh were thrown in on 28 minutes at a time when Monaghan were well on top that figure was up to the dozen.

Yet, Monaghan were ahead 0-10 to 0-7 at the interval and Donegal were thankful that Kieran Hughes had to settle for a point on the half-hour that really should have been a goal, the wing-forward driving over after getting away from Eamon McGee to set up the chance. From distance, Monaghan were devastating in the first half, making good use of the wind to take a grip of it.

Patrick McBrearty and McFadden (free) started the ball rolling for Donegal, who led again when McFadden tapped over a 13th minute free after ‘keeper Rory Beggan (’45) and Darren Hughes, with the aid of Hawkeye, levelled it up.

Hughes and Paul Finlay steered Monaghan ahead and it wasn’t long before they widened the gap with McManus, Paudie McKenna and Dessie Mone, with a splendid finish after side-stepping two Donegal players, put them 0-7 to 0-3 in front.

Donegal did get back into it, though, as Murphy drilled over after fetching above Vinny Corey in a move that echoed his goal in the same Hill 16 net from the All-Ireland final. Murphy won a subsequent free off Corey and converted it to keep Donegal in check, but McKenna, Kieran Hughes and Finlay, with another long-range score, ensured that Monaghan were well on top of it at the changeover, where Donegal had hope thanks to Murphy and McFadden frees.

Gallagher and McHugh were called for with Donegal struggling at times. Luke Keaney, who was in for the injured Leo McLoone, had to make a good saving tackle to deny Kieran Hughes in the eighth minute, recovering well from his own mistake to concede a ’45.

Odhrán MacNiallais brought Donegal to within two at the outset of part two.

When Kavanagh looked up and saw red, Donegal’s twine began to unravel and the hope now must be that they can stop the spool, with only four weeks until their swords clang against those of Derry in Celtic Park.