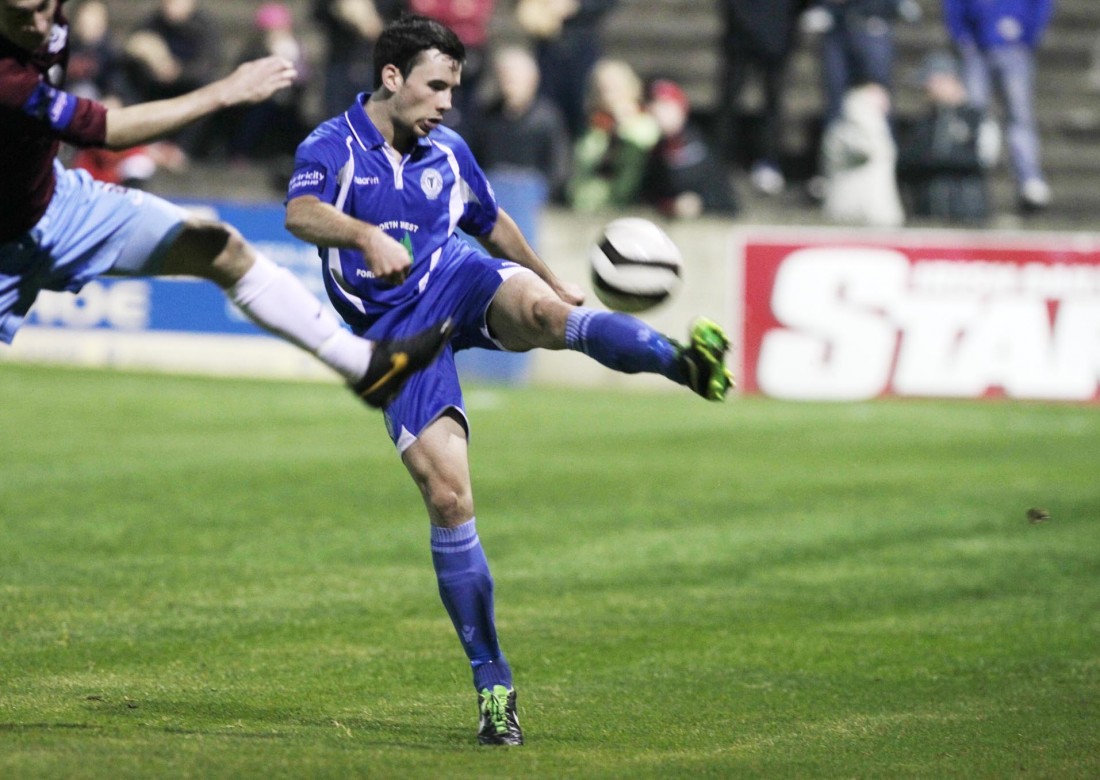 Josh Mailey who was sent off on Friday night

FINN Harps fell to their first defeat of the season on Friday night as Shelbourne scored a win that saw them leapfrog Ollie Horgan’s men into the First Division’s pole position.

Harps entered the game top on goal difference, but with Gareth Coughlan and Keith Quinn on target at Tolka Park, Harps were left nursing the first reversal of Horgan’s reign.

It was a night when the dearth of attacking options available to the manager was apparent. Kevin McHugh and Sean McCarron were unavailable because of injuries while an early-season spate of booking meant that Ruairi Keating spent the night in the sin bin through a suspension.

How Horgan must have wished at least one of them had been available.

Trailing to a Coughlan free-kick that beat the out-of-position Conor Winn in the 23rd minute, Harps were handed a glorious chance to get back on level terms on the stroke of half-time. Referee Andrew Mulally spotted a foul by Lee Desmond on Damien McNulty and immediately pointed to the spot.

In truth, Michael Funston never had the appearance of an assured penalty taker as he addressed the ball. The midfielder went down the middle, but Greg Murray saved with his feet.

A goal there and Harps would have gone into the break on an even-keel. As it was they trailed to Coughlan’s opener.

It was Coughlan’s first start of the season and it was he who had won the free, drawing a foul off Harps defender Packie Mailey as he weaved his way in. Coughlan slammed the ball high into the Harps net for the lead goal.

Earlier, Adam O’Connor was denied by a good save from Winn while Josh Mailey curled wide at the other end.

Harps, despite their lack of strikers, did go close but Desmond did well to block from Ciaran Coll’s close-range effort.

Horgan’s team emerged with determination for the second half with Keith Cowan going close early on, the defender heading just wide.

Coughlan almost doubled Shels’s lead, but he was denied by Winn, while Dylan Connolly flashed the rebound across goal, when even the faintest of touches would have applied the finish.

The lively Connolly did superbly to pick out Coughlan, but his shot from 12 yards crashed off the crossbar. Coughlan turned provider but Conor Murphy turned wide.

Harps were dealt a blow when Josh Mailey was sent off a minute from the end for a foul on Willo McDonagh and Shels doubled the lead when Quinn tucked home a penalty awarded after Cowan took down Connolly.