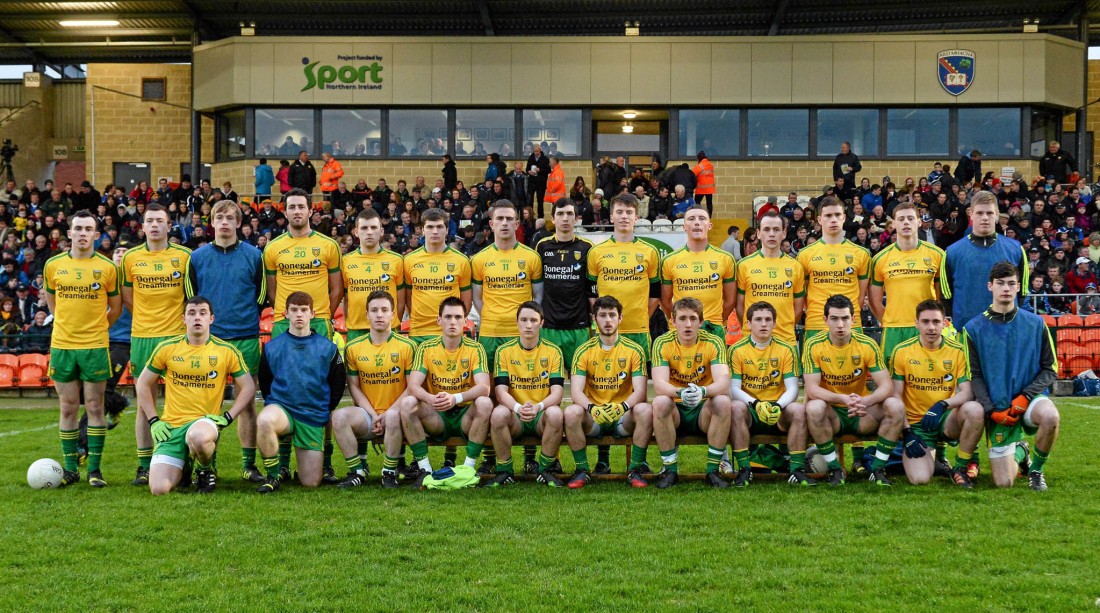 The Donegal Under-21 squad before Wednesday’s final.

A stomach-churning defeat by Cavan ended his side’s hopes of provincial glory, just at the time where the sun appeared to be shining on them.

Cavan’s late flurry of scores, rocking Donegal with a 1-3 haul in the final four minutes of action, broke the barrier erected by stubborn Donegal. Liam Buchanan’s goal, with the game clock in its 59th minute, was the magic moment in a game characterised by the defensive set-up of the two sides.

Rigid Donegal had held firm right until the last roll of the dice. They certainly didn’t go down waving the white flag.

“Everything was in our favour,” Curran said after Ryan and Eoin McHugh hit two excellent points for Donegal to take charge. With Enda Hession and Buchanan cutting through their cloth, though, the game was up.

“We just switched off and there was a lack of cuteness. In hindsight you’d have to say that the big midfielder (Buchanan) should never have got through like he did – but he did. Those are the lessons you learn.

“Hopefully the players learn those lessons and bring it into their careers down the line. There are a lot of really good fellas in that dressing room; fellas who have big futures for club and county.

Had they won it, it would have been harsh on Cavan, who had been the better outfit throughout. But they looked out of ideas and their resistence appeared lost when Eoin McHugh’s wondrous kick three minutes from time sailed between the posts.

A side of their experience doesn’t buckle, though and Buchanan’s goal was the tonic for a roaring finish by the Breffni men.

It left Curran almost speechless for a time.

“Heartbreak is a term that is bandied about a lot by losing teams, but that is as close as you’ll get to heartbreak,” he later reflected.

“We’re immensely proud of the boys for their second-half performance and the way they dragged themselves into the game, got ahead. We were in a position where we shouldn’t have lost. That’s the only thing we can be disappointed with. We just lacked the wee bit of cuteness when we needed it. They had players on the field with the experience of closing things out.

“We were very disappointed with the goal because it was from a stray handpass up the field and we got caught up the other end. It was a great finish by Dillon. Last year we were looking down the barrel of the gun at six-one down at half-time when we were always chasing. We weren’t in that situation this year. We put Cavan to the pin of their collar and they had to earn it. By God they earned it.”

The Peter Reilly-managed Cavan were in the final for the fifth year in a row and they chased the prize for a fourth on the bounce.

“We can only sit here in awe of them,” Curran said.

The defeat drew to an end what Curran said had been ‘a difficult year’.

“I think Donegal has to take stock at a lot of things. Look at Cavan – they deserve success because they give this competition everything as a county and that is no coincidence.

“It has been a very, very difficult campaign.  You can’t shy away from the fact that Cavan have won four-in-a-row. Everyone knows the importance they have attached to the competition.”

Cavan’s ambitions could perhaps be reflected in the fact that the winning captain, Conor Moynagh’s speech was delivered from a lengthy, pre-prepared speech, printed and laminated for good measure.

By the end, they knew they’d been in a game.

Joe Dillon’s goal gave Cavan a 1-2 to 0-2 lead at half-time, but Donegal chipped away through the second half before they finally managed to sit in the driver’s seat.

“We asked them to do that at half-time: To be brave; to go for it,” Curran said.

“Sometimes teams get to this stage and they can be overcome by a fear of losing. Our boys were a bit apprehensive in the first half and it took a while for them to get going. At half time they realised that you can be overcome by trying not to lose and trying to keep the house tight. Sometimes you have to go for it. They did that for twenty-five minutes. Unfortunately we just got caught at the wrong time.

“We’d be very disappointed with the manner of the goals. We got caught for the first with a stray handpass and a big ball in. We had players there. Someone said there had been question marks about the number of steps he took. The boys tried valiantly to deny the goal, but ultimately he got it.

“The second one was a huge disappointment. We were in such a position of strength at that stage. Look, that’s underage football for you. We set out with a panel of twenty-eight, fourteen of whom had never started a game for Donegal before. It was a relatively inexperienced bunch despite having the five seniors.

“Ultimately that caught us, that lack of experience and making sure that the fella (Buchanan) didn’t get through.

“We should have denied the goal and we shouldn’t have let them in as close to our goal as we did.”

While McBrearty, Martin O’Reilly and Gavin Gallagher have now played their last game at Under-21, the class of 2015 will have retained the services of Ryan McHugh, Eoin McHugh, Darach O’Connor, Hugh McFadden, Conor Parke, Joe Coll, Ciaran Thompson, Daragh Mulgrew and Willie Gillespie. That Wednesday was the final swing of the hammer for this group on the bus hurts as much as the defeat itself.

“There is no tomorrow,” Curran said.

“This group of players will never be together again.

“We set out at the start of the year to improve every individual as players and to send them back to the clubs as better players. I think we’ll have done that. If you do that and get success along the way it’s brilliant, but unfortunately we came up short.”

As for the manager’s own future, he’ll take time to ponder.

He said: “I can’t stress enough how difficult the year has been. It’s not the night to talk about it, but it’s been a very difficult year.”