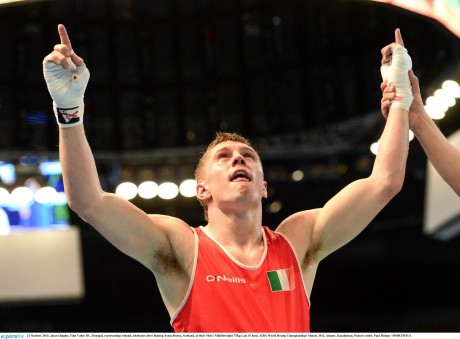 JASON Quigley has made the move into the professional ranks, the 22-year old Finn Valley ABC man joining the famed Golden Boy Promotions in Los Angeles.

The World silver medalist and the 2013 European middleweight champion, has been in L.A training for the past month and his alignment to Oscar De La Hoya’s stable in California.

“I’m really, really excited,” Quigley said in confirming his move that will see him forego the chance of the Olympic Games in 2016.

“I’ve been contemplating whether to make this move or not, but I’ve gone with this feeling in my heart that I have the excitement and hunger to go on and fulfil my childhood dreams of becoming a world professional champion.”

Amir Khan, Bernard Hopkins and David Haye are among those in the De La Hoya camp, while Englishman Anthony Ogogo is familiar to Quigley – he beat Ogogo in a Multi-Nations final in 2011 in Helsinki.

Quigley has hinted at a pro move since getting back into training, telling this newspaper in January: “I wore the Irish vest well and made history in it. I served my country well as an amateur in the vest. I really would like to go and do that without the vest as a professional.”

Now, Quigley will get that chance and is likely to be in action in the coming months and is expected – as revealed by the Donegal News in February – set to join forces with De La Hoya’s chief boxing advisor, Al Haymon, who was named as the Manager of the Year in 2013 by the Boxing Writers Association of America and who counts Floyd Mayweather Jnr among his clients.

The move into the pro game will also see the Ballybofey man leave the Sky Sports Academy, who he joined forces with after his loss to Zhanibek Alimkhanuly in the world final.

“Sky saw something special in him,” said Johnny Nelson, the former world champion who was Quigley’s mentor.

“Speaking to Jason on numerous occasions he craved emulating and bettering the success of one of his old amateur foes Anthony Ogogo and what better way to do that then with one of the biggest boxing outfits in the world, Golden Boy promotions. I wish Jason all the best for the next stage of his career.”

Quigley won eleven Irish titles as an amateur, including the 2013 Irish senior middleweight title, while he won three European gold medals – the Youths, Under-23 and Senior titles.