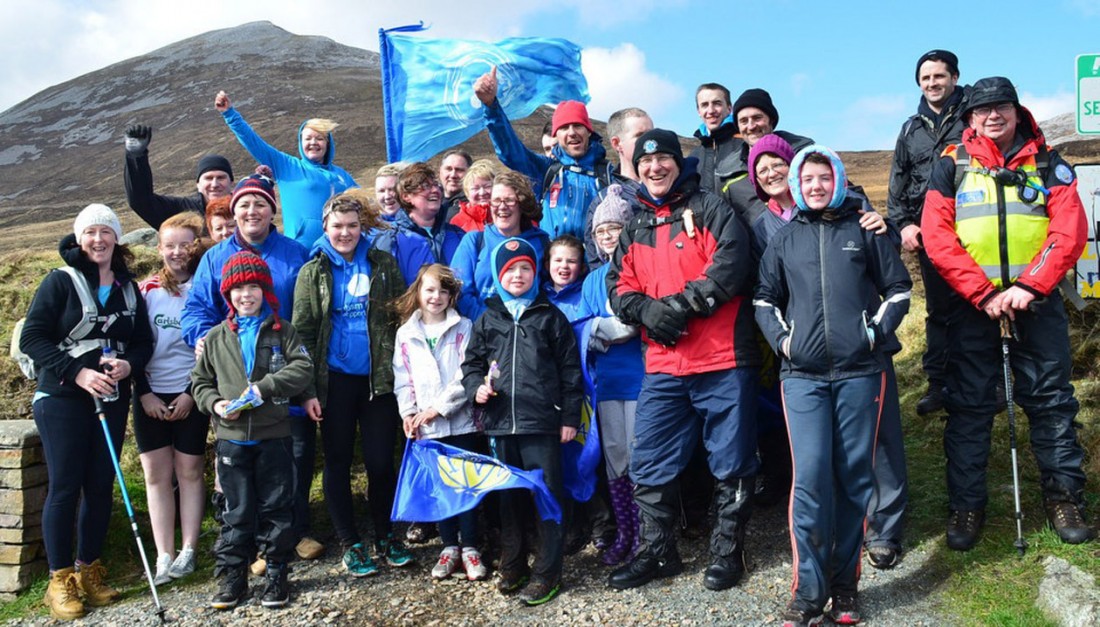 The sun was shining when Jason Black got the last group down the mountain to finish off a fantastic Errigal climb yesterday. Around 140 people in total spent the morning tackling Donegal’s highest mountain, among them Jason Black who conquered Everest last year, helping Donegal Autism Family Support Group raise awareness and funds in the process.

The organisers who were joined on the day by some of the county’s Twitter users taking part in their 3rd Errigal Tweetup, aimed to turn the mountain blue and the majority of climbers wore blue or carried blue flags on the day.
June Doherty of the Autism Family Support Group said they were delighted with the turn out.

“We decided to climb Errigal to raise awareness of Autism in Donegal but this is just one of many events we have held over the past week. We have lit up practically all of Donegal – as much as we could anyway.

We lit up the Cathedral and other buildings in blue and in doing so we hope to make people more aware of autism.
We had a big bus down on Main Street on Autism Day, we had a quiz, we have a sponsored walk and a tea dance coming up and at the end of April we have a Garth Brooks Tribute night when there will also be the chance to win two tickets to go see Garth Brooks in concert.”

However, as the rain battered down into the carpark at the foot of Mount Errigal yesterday morning, the organisers might have been forgiven for thinking their turn the mountain blue idea might well be a wash-out.

As it turned out, it was anything but that and before the official start time of 11am, the first climbers had registered and set off up the mountain.
“The weather hasn’t put anyone off and that’s fantastic, we have had people coming along to register and set off early up the mountain so it looks like we will have a great turn out.” 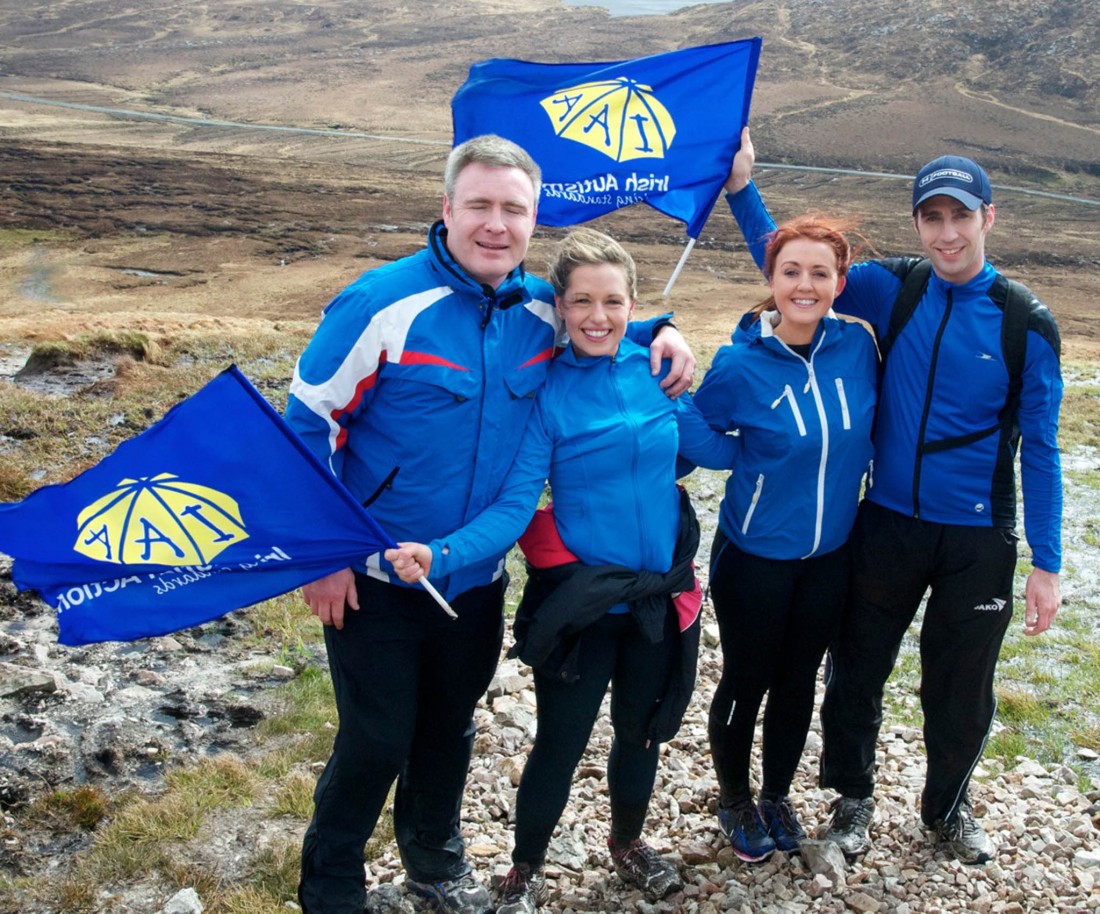 John Gildea, Sharon Gildea, Louise Crossan and John D Rouse on their way to the top of Errigal during yesterday’s climb.

Donegal’s third Tweetup had joined in with yesterday’s event but as in previous years they also collected old mobile phones for Little Angels School and were promoting the donations for Donegal Mountain Rescue who are hoping to purchase new emergency vehicles.

Clare McCahill who helped organise the Tweetup said there had been a fantastic response from Twitter users towards joining in with the Donegal’s Autism Family Support Group climb.

“The Tweetup in many ways is an opportunity for twitters users to get to meet up and chat socially but it has always supported charities and when it was suggested online that we join the Autism Group’s climb this year, everyone was very enthusiastic.”
Indeed, once they were back within signal range about half-way up the mountain, the tweeters were online posting updates of the climb that saw young and old tackle the mud, wind, rain and even sunshine in their bid to get to the top – and back.

Among them was a group from Danny Ryan’s Boxfit class, encouraged and cajoled all the way to the top and back by Danny, while Jason Black stopped to speak to many on the mountain, offering encouragement and praise for their fantastic efforts.

“It was a fantastic day,” said June who, with her ground support team helped keep the event flow extremely smoothly, but she added “we couldn’t do it without the support of people like Rory Kelly from Spar in Glencar, Mary and Gerard Forde from DPD Couriers and Reynolds of Raphoe who have been superb with their sponsorship and help.”

It was a sentiment shared by the climbers, who, despite the mud, were delighted to have taken part in such a fantastic event – highlighted indeed by the fact that the inspirational Jason Black stayed with the last group until they were off the mountain. 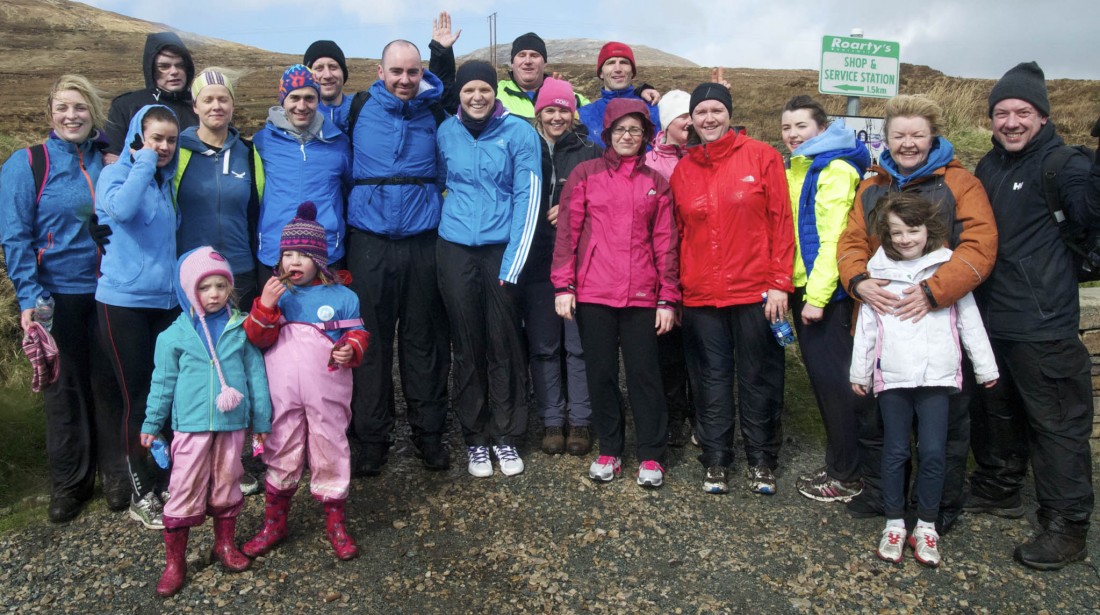