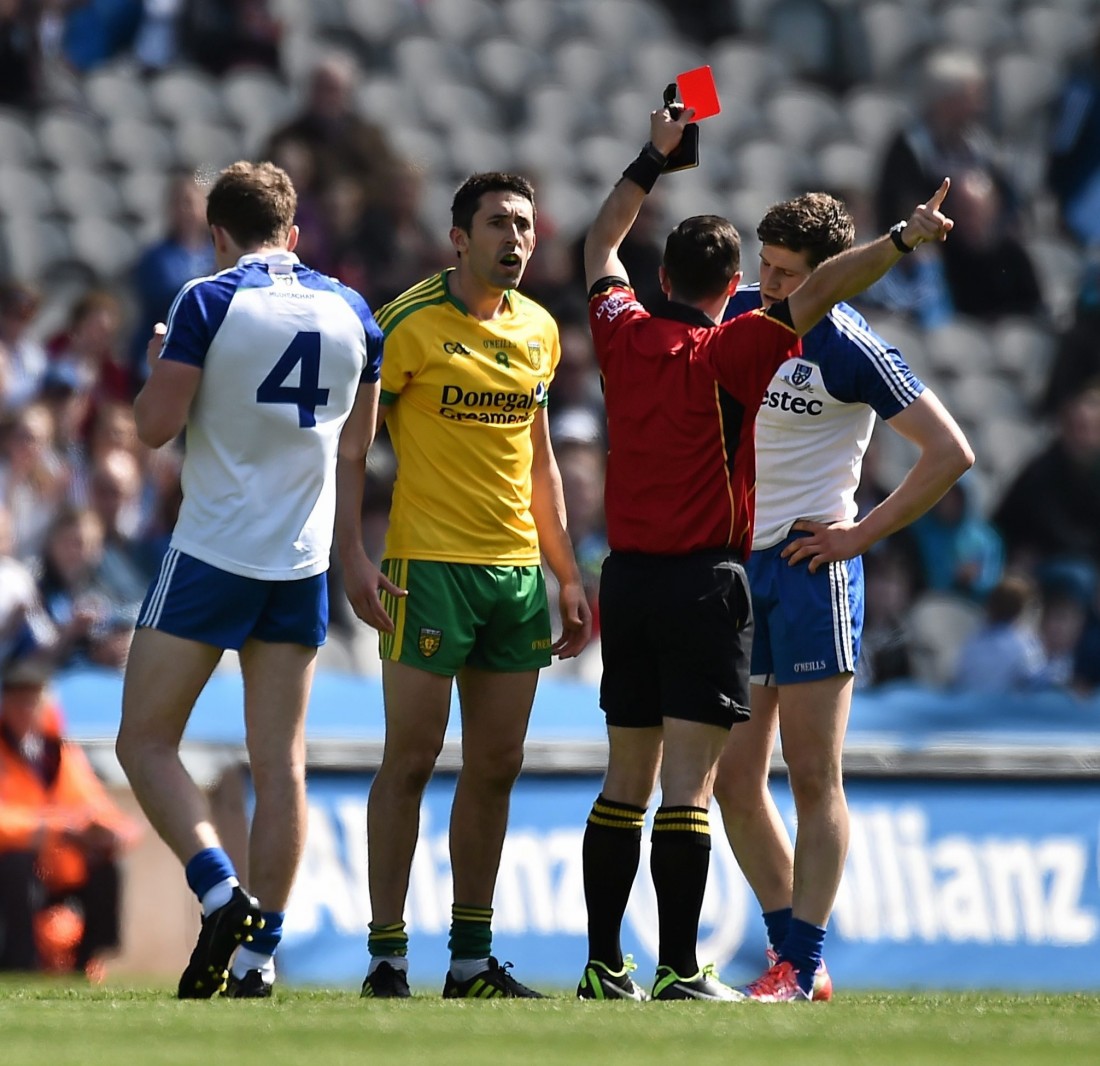 RORY Kavanagh is set to miss Donegal’s Ulster Championship clash with Derry next month after a costly red card in yesterday’s Division 2 final.

Donegal were well beaten 1-16 to 1-10 by Monaghan, with Kavanagh seeing red six minutes into the second half after getting involved in  an unusual tangle with Monaghan player Darren Hughes.

As he went to pick up a loose boot, Kavanagh and Hughes were embroiled in verbals before the Donegal midfielder appeared to put the shot into Hughes’ groin, in view of the nearby linesman. The moment of petulance has cost Kavanagh dear, with the St Eunan’s man having to serve a suspension for the May 25th clash in Celtic Park and it cost Donegal dear, too, given that Kavanagh had been their outstanding performer during the League campaign.

“It’s something we could have done without. He has lost his discipline,” said Donegal manager Jim McGuinness, who has stressed the importance of discipline to his players.

“He was provoked, but he has to retain his discipline. That is going to happen in Championship football as well.

“A lot of stuff went on in the Ulster final last year, but you can’t bring that into the game. You have to retain your focus and do the right thing.

“We were here in August and Eamon McGee lost his discipline. It’s not good enough. You represent your county and you have a duty to do the right thing. He got involved in something that he shouldn’t have got involved in. Eamon done the same thing in August.

“We have spoken about it and we just have to take that lesson.”

Kavanagh’s dismissal came at a time when Donegal had worked their way into the game. They managed to revive, with Michael Murphy netting a penalty soon after, but the numerical disadvantage was to cost as Monaghan made hay, their captain Conor McManus polishing off a fine team move to palm home a goal to inspire the six-point win.

McGuinness said: “I felt that we were in a very good position at that moment in time. We were pushing on, we had the wind at our back, there were two points in it and I felt that we could have pushed on to try and win the game. It left it very difficult.

“They are very good with the ball in hand. We were trying to press it, but they had a man over all the time. It left the last period of the game very difficult in terms of trying to win the game.

“It had a big impact on the game and that’s the difficult part.”

Malachy O’Rourke’s side have now won two successive League titles and in the space of two seasons have gone from Division 3 to Division 1, proving here that they weren’t one-hit wonders in last year’s Ulster final.

Derry suffered an even greater defeat, losing 3-19 to 1-10 to Dublin in the Division 1 final, leaving their boss Brian McIver with similarly searching questions.; the biggest of all being which side had left Drumcondra with the most to work on.