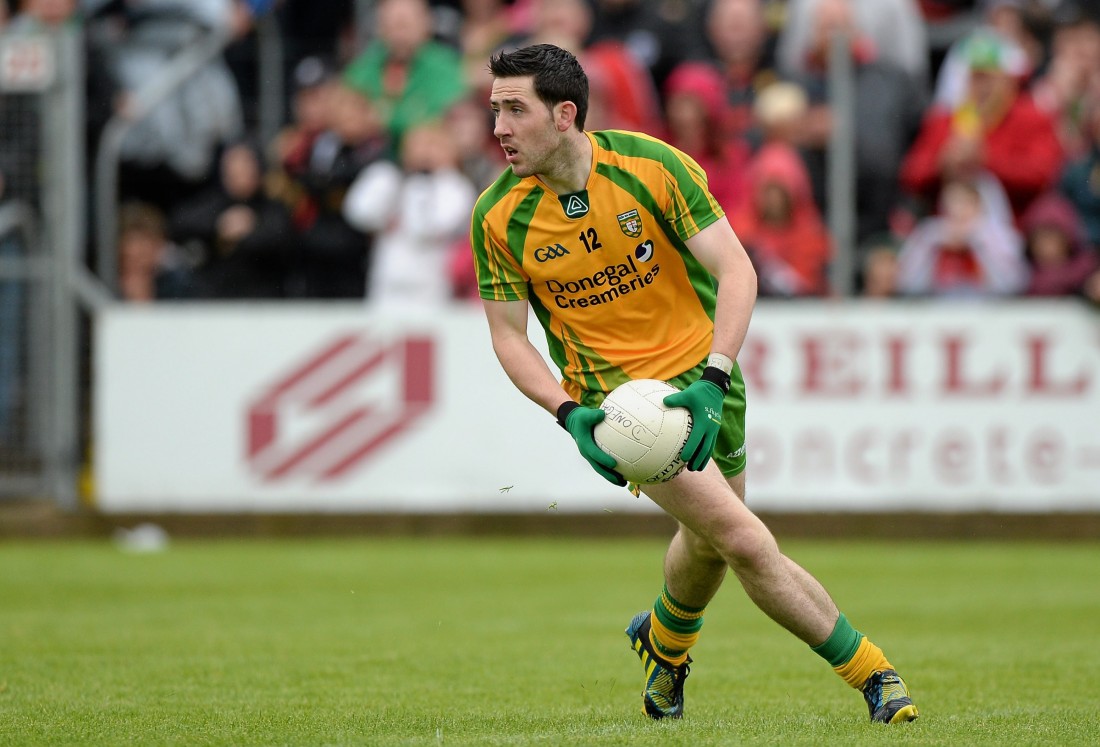 MARK McHugh is one of four players confirmed to have quit the Donegal senior football panel.

The 23-year-old Kilcar man has been joined in making an exit by panellists Gary McFadden, Antoin McFadden and Thomas McKinley.

McHugh was an All-Star winner in 2012 and one of the key cogs of the team that won the All-Ireland.

Having missed the win over Armagh earlier this month because of a hamstring injury, he did not start Sunday’s Division 2 final against Monaghan at Croke Park, but came on as a sub late in the first half.

However, he took no part in Tuesday night’s training session in Convoy.

“He has left the panel,” Donegal selector Damian Diver confirmed on Wednesday night when he represented Donegal at the launch of the Ulster Championship in Belfast.

“He hasn’t been enjoying his football. He has been troubled by a hamstring injury and his form has been indifferent. He just wasn’t enjoying it and wanted to take time out.

“It can be hard to keep it going mentally. He felt that he wanted a break and take some time to find himself.

“Any player you lose at this stage of the year, it’s a blow, but we’ll have to get around it.”

McHugh is understood to have conveyed his decision to McGuinness via a text message on Tuesday having been unable to make contact initially. The pair subsequently spoke at length on the phone in a call lasting around half-an-hour.

While McHugh was not present at the training session at the Centre of Excellence in Convoy, his decision was not relayed to the remaining members of the panel with management instead wishing to keep their full attention and focus on the preparation for the May 25th Championship opener against Derry at Celtic Park.

The news comes as a blow to Donegal, in the wake of a six-point defeat to Monaghan and just over three weeks before they take on Derry.

News of his departure, and particularly the timing of it, was seen as a shock to many, but the Donegal mangement are said to have anticipated that a withdrawal was on the cards with the player said to have had ‘unhappy body language’ of late.

With Rory Kavanagh set to serve a suspension for the Derry game following his sending off against Monaghan, Diver admits that McHugh’s exit is a blow to the squad. Playing in a specialised role as a sweeper, McHugh was the keystone in the Donegal set-up during 2012, while injury problems hampered last season.

Diver said: “He’s full of energy, a great footballer who was always in the right place. Those sort of players don’t grow on trees. He does the job very well. It takes a good head to play the position he played.”

Asked if McHugh could return, Diver said “The door is always open – to any player.”

However it is believed that McHugh could line up a move to America for the summer to play club football. A move stateside could not be ruled out for the player, who would be back in ample time for the start of the Donegal club championship which will not get underway until August at the earliest.

McHugh was a member of the Donegal Under-21 team, managed by Jim McGuinness, that reached the 2010 All-Ireland final.

The player, a final year student at Sligo IT, is understood to have grown disillusioned about certain aspects of his position within the Donegal set-up in recent times.

Neither McHugh or McGuinness were available for comment on the matter.

Under John Joe Doherty McHugh made his Donegal senior debut in May 2010 as a sub in the Ulster Championship defeat to Down in Ballybofey while he made his first start a few weeks later in Crossmaglen where Donegal lost to Armagh in a qualifier. He racked up 46 appearances in his time with the Donegal senior team, including 19 Championship games.

Gary McFadden, Antoin McFadden and Thomas McKinley were also members of the 2012 All-Ireland-winning panel, with the latter two back in the fold this year having stepped away for 2013. The three have informed the management that they are to leave the panel.

Antoin McFadden handed in his notice last week in advance of the Division 2 League final and was not part of the traveling party for the weekend’s game. Gary McFadden and McKinley made their announcement following Sunday’s game.

The trio are said to have been frustrated with the lack of playing opportunities. Gary McFadden was the only one of them to make a National League appearance, but the Glenswilly man was restricted to a two-minute cameo at the end of the Louth game in Ballyshannon.

Since the end of the 2013 season, Ryan Bradley and Ross Wherity emigrated, while Donegal also lost Marty Boyle, Daniel McLaughlin and Adrian Hanlon in late 2013 and, more recently, Killybegs midfielder Matthew Smyth stepped off the carousel.