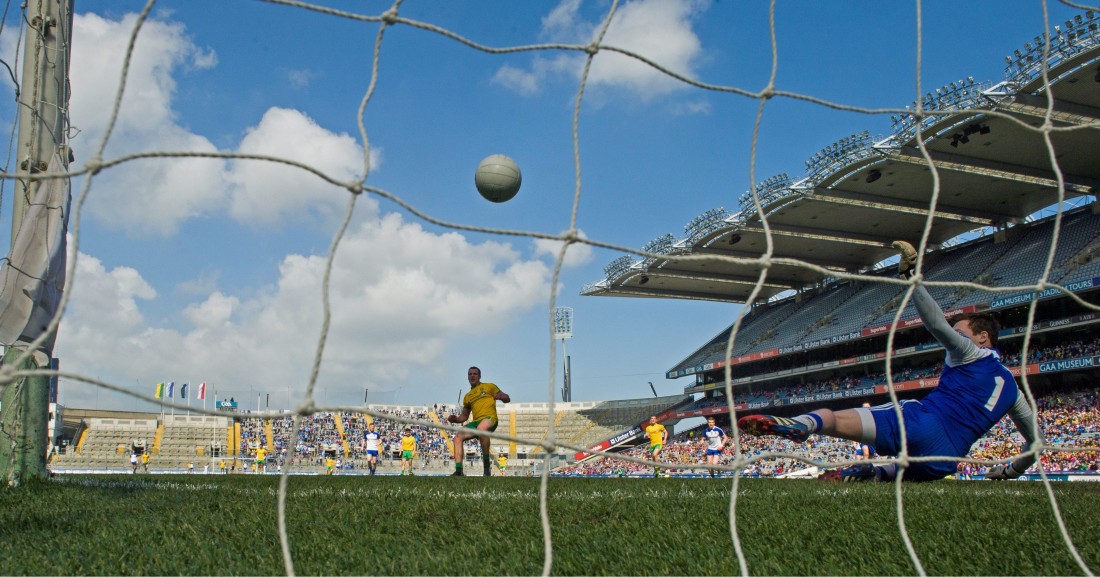 Michael Murphy finds the net with a penalty against Monaghan

IN ALL the time that Jim McGuinness has been the Donegal manager this is probably the most worrying time of all.

Bar the first five minutes of yesterday’s Division 2 final against Monaghan, when they looked initially lively and sharp, Monaghan were by far the better team. Monaghan looked sharper and hungrier throughout the game and they really just looked like they wanted it more.

Monaghan were fresher and Donegal, on the back of a week’s training camp in Portugal, looked jaded, tired and very leggy.

While this raises questions from some people as to what the training in Portugal was like, I had an interesting conversation with Tommy Carr, the former Dublin manager, yesterday. We were talking about training and preparation. Tommy said that he found, in his time managing Dublin, that it took them usually around three weeks before they saw the benefits of such camps. They were on a few in his time so he’s pretty well versed.

That doesn’t take away from what was a worrying day at Croke Park for Donegal.

Monaghan were in control of the game. They had ten different scorers and were getting points from all angels. Their two corner-backs caused Donegal a lot of hardship and Fintan Kelly added his name to the scoreboard in the second half.

Monaghan had so many players troubling Donegal: Darren Hughes was extremely difficult to tack down, Conor McManus scored a couple of excellent points and Paudie McKenna had a fine game. All through the field, Monaghan had the star performers.

Conversely, who could you say from Donegal played up to or anywhere near scratch?

Going into Championship, this was the final competitive game for Donegal and it was felt that it was great preparation to get a game in Croke Park so close. We were looking for a performance more so than a result, but we got neither which leaves us with worry lines on the brow given that there are only four weeks until we meet Derry in the Championship.

For that game, Donegal will be missing Rory Kavanagh after his sending off yesterday. During the League he was Donegal’s most consistent player and the incident for his red card, while needless and disappointing, probably summed up the frustration levels in the team. The official had no option but to send him off and he is a huge loss for the Championship. In an area where we certainly aren’t burdened by an array of possibilities, Rory was the one bright light, but now he’ll be absent for the Celtic Park game.

Again we struggled in front of the posts, with just two points coming from players other than Michael Murphy and Colm McFadden.

It was a day that wasn’t at all dissimilar to the Ulster final last year. Monaghan continually bottled us up, got numbers behind the ball and broke in numbers to devastating effect. They are so well drilled and Malachy O’Rourke deserves immense credit for the job he has done. They seem to have a lot of hunger again this year. Hunger is an over-used word in the GAA sometimes, but Monaghan have it in abundance.

When things started to go against Donegal yesterday, there were gaps appearing all over and the heads went down. When Murphy put away the penalty, we thought that we might kick on, but it didn’t happen and you have to say the better team won.

The most worrying thing of all was that, again, there was evidence of the reliance on so many of our 2012 All-Ireland winning squad. It has to be a concern that there hasn’t been a player unearthed who can significantly contribute.

Jim has been trying to freshen things up, but it’s been hard to find someone who can really impose themselves on a game. It’s basically what we have from the 2012 panel and if we’re to make any inroads this year it’ll be down to those key men from that triumph.

Why I say that it’s the most worrying time for Jim that he has had is because of the answer he will get when he sits down to wonder: What’s the next step?

Last year we had excused, plausible reasons for our slump: There was the celebration circuit from the All-Ireland win, the injuries and the fact that we came late to preparation. This year, we were supposed to be in a good frame of mind, but now I wonder and worry about what lies ahead for Donegal.

The big plus yesterday was perhaps the mauling of Derry by Dublin. Derry will be more affected by this defeat than Donegal and it will be the manner of it more than anything that stings Brian McIver.

Dublin just eased through them and they have everything: The strength, the movement, the physique, the mobility. This could be a Kilkenny hurling job where Dublin could just dominate Gaelic football for a while.