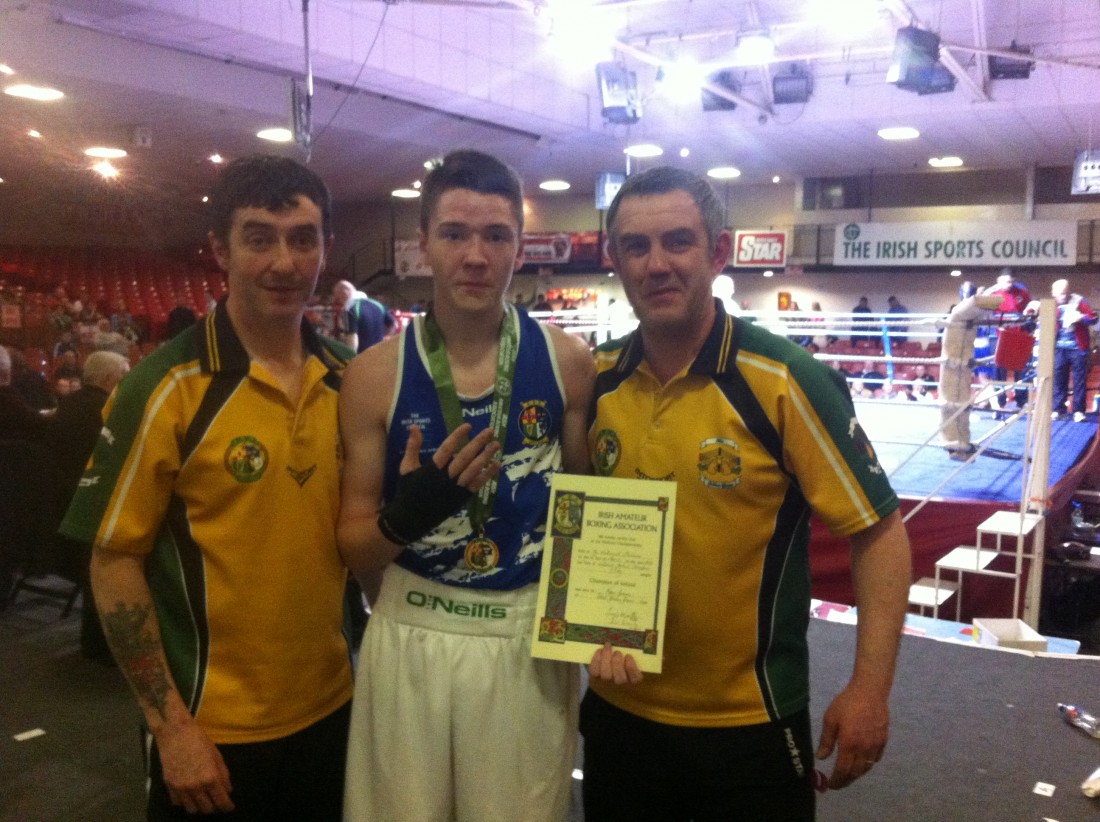 BY CHRIS MCNULTY
Ringside at the National Stadium

IT was a golden day for the Golden Gloves on Saturday as Illies Golden Gloves boxers John Moran and Ryan Greene brought Irish Schoolboy and Youth titles back to Donegal.

The victories in the Boy 4 36kgs and Youth 2 57kgs finals were the 30th and 31st Irish titles won in the fifteen-year history of the club, two new champions as well to add to the club’s roster. Moran was in his first appearance at this stage while Greene has had previous, although this was his first national success in the Illies corner, his previous four Irish titles coming for the Oakleaf club.

In all, three Donegal boxers triumphed, with Edward McEleney from St Bridget’s, Clonmany scooping an impressive win in the Youth 1 91+kgs decider.

Bridgend lad Greene is a recent recruit to Illies and, after a difficult couple of months that included a defeat to Brad White in the National Open Youths, he’s getting back into form.

Greene was in blistering form from the off against Gleann’s Sean P Morris, a thumping 30-27 opening round setting the tone. It had been a cagey bout, but Greene always seemed in control.

“I found my feet and caught him a couple of good shots,” he said.

“He was hitting my gloves, but I thought he might have been working more for a while. I was hitting him hard and was confidence once I found my feet that I could win it.”

Morris tried to up the ante, but Greene held firm and the final two stanzas were scored in his favour. The Illies man is back with a smile on his face again.

He said: “I’m back enjoying it.

“I’ll go for the Open Youths, the Under-18s, in May. I’m still a year young for them, but I’ll give them a rattle. This last couple of weeks I’ve been coming back to myself again and feeling good about it.”

His win added to Moran’s success early in the morning. This was Moran’s first appearance at national level, having been haunted by Liam Glennon (St Joseph’s, Derry) in his previous marches through Ulster. Moran made no mistake when the sight of the South Circular Road came into view. 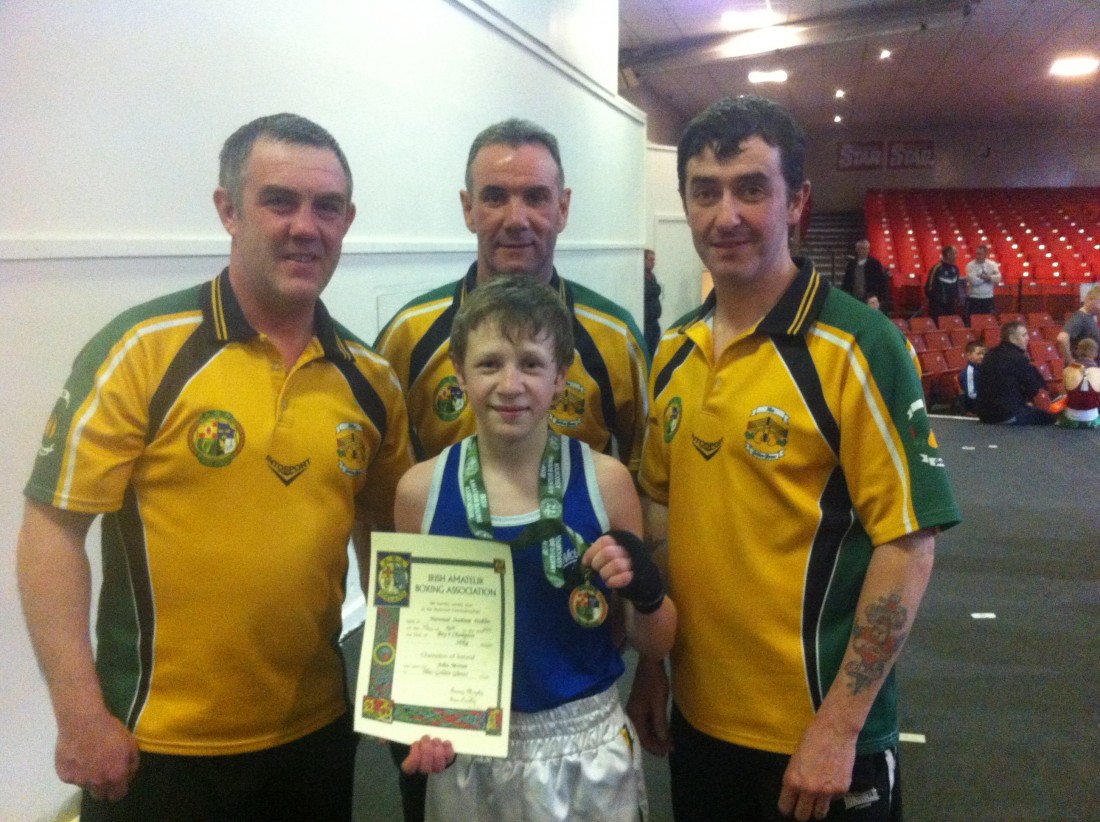 John Moran celebrates his win with his coaches.

Following a deserved 3-0 win over Togher’s Daniel Hurley in the semi-final, the explosive Moran secured a tenth Irish title for the household, following in the footsteps of his brothers, the multiple-Irish champions Leigh (with five titles) and Daryl (four).

Against Maughan, of the Avona Club in Arbour Hill, Dublin, Moran was involved in a hell-for-leather bout for the four and a half minutes of its duration. Maughan’s big support tried to roar him on, but Moran held sway.

The contest could have swung either way, with little between them, but Moran was given the nod in the opening two rounds to claim a memorable win.

Edward McEleney had little in the way of familiarity either, but the St Bridget’s, Clonmany bruiser won’t forget his first Irish title in a hurry, In what was only his fourth competitive bout, the big 14-year old made light work of Lukas Kirianas of St Mary’s Daingean in the Boy 4 91+kgs decider.

The tall, rangy McEleney used the long reach of the left paw to good effect and with Kirianas forced to try the body time after time it was a contest in which McEleney was always in control and he took the 3-0 decision.

“It’s brilliant for Edward to get a title so soon, but he’s put in a big effort and deserves it,” coach Ray Donaghey said. 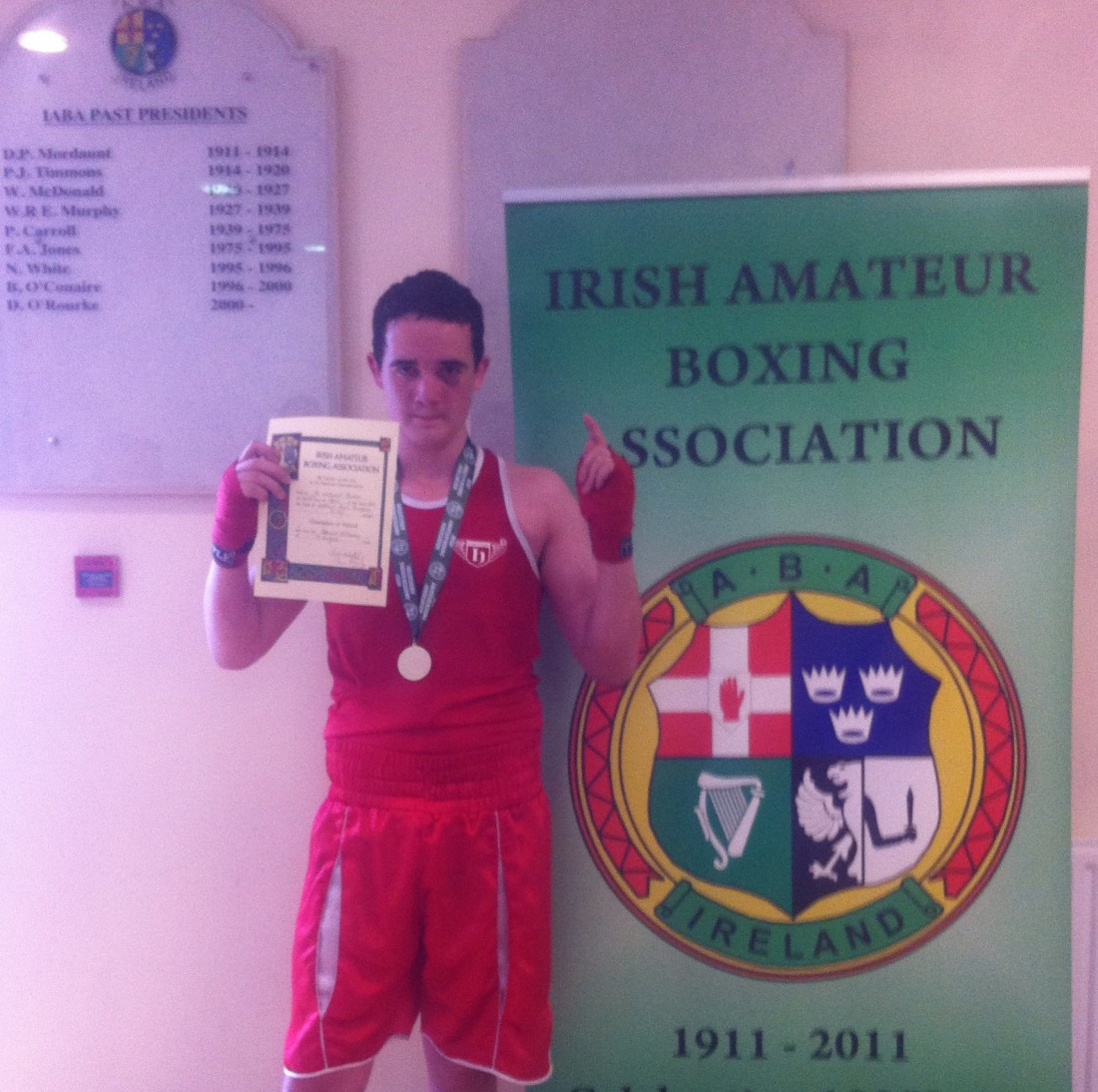 St Johnston’s Brett McGinty and Dubliner Christopher O’Reilly each went into their Youth 1 70kgs decider having previously won five Irish titles. It was O’Reilly, from the Bracken club in Balbriggan, who took a controversial win that left McGinty’s corner angry at the scoring.

O’Reilly took a 2-1 split decision, but with three of the five ringside judges having given the nod to McGinty, the red corner cried foul. Two of those who’d sided with McGinty weren’t utilised and the 15-year old former European bronze medalist became the latest victim of the sport’s scoring.

It had been a full-blooded affair that was one of the best fights on view.

McGinty was awarded the first round 30-27, but the judges used for the next two stanzas were those who’d given an ever-so-slight tip of their hat to O’Reilly.

But when the lottery of the computer scoring went into action it was the numbers of O’Reilly that came up, leaving team McGinty in a whirlwind of dejection, frustration and confusion.

Experience was the decisive factor in a gripping Boy 4 54kgs final where Callum Toland, another St Johnston native of the Oakleaf stable, was pipped at the post by Sean Burcell (Marble City).

Toland, in his first-ever National final, emptied the tank and then some. If Purcell’s luminous yellow socks and trainers lit up the bout, then Toland’s beams shone brightly, too.

Eighteen months ago, Purcell competed at the European Schoolboy Championships in Russia and is well versed in the arts of these occasions.

However, just as the bell for the end of the first round was chiming, Toland landed a left hook square on Purcell’s temple in a neutral corner and the Kilkenny man was rattled.

Purcell’s cuteness was evident as he picked the points, but the never-say-die and determined Toland continued to ask hard questions. Even under pressure, Purcell held on. Toland’s corner were buoyed when Purcell was given a public warning in the third.

When the scores were totted, there was nothing to separate them, with Purcell taking a 3-0 win on a countback. Glory for Purcell, but for Toland there will come, in time, reflection on what has been a breakthrough season that has yielded first ever Ulster 9 Counties and Ulster Boy 4 titles, not to mention his debut at the National Stadium in these Championships.

What he has now is perhaps what was the difference on Saturday afternoon – experience.

Dungloe southpaw Kevin McMonagle put up a brave fight, but found Shane Flavin (Paulstown) just too elusive. McMonagle heeded the instructions of his corner, ‘Don’t give him an inch’, and had a good start to the second round having been on the back foot for the first, but Flavin took the win, while St John Bosco’s Gavin Johnston was beaten by Mayfield’s Thomas McCarthy.

Buncrana young gun Denver Gill was always up against it against double Irish champion Kieran Lally, who stopped the bout in round two and Liam Callaghan felt particularly hard done by after coming out second best to Luke O’Shea (Ballincollig). Callaghan was another who looked to have edged it, but he felt the unfamiliar pang of defeat.

The last Donegal man in action was the rookie Joseph Reddin from Illies, who put up a gallant display, but was beaten by Danny Barrett (Champs Camp) in another contest that was harshly scored 3-0 in favour of Barrett.

“Joseph has had a brilliant season, winning the 9 Counties and the Ulster titles,” Illies coach Eamonn Duffy said.

“He’s won fourteen out of sixteen fights this season. The experience will be massive for him. He wasn’t out of place in the final there.”

All in all, though, it was a pretty productive day for the Illies club.

Duffy said: “We’re very happy with the day. To get two new champions is fantastic for the club.”