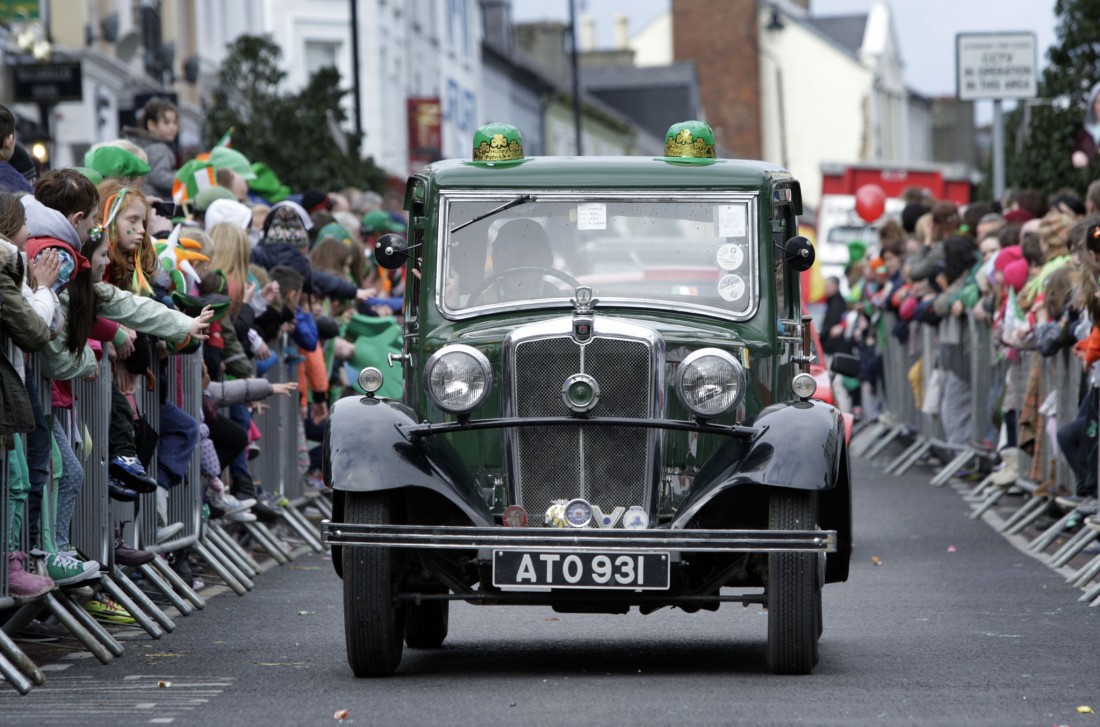 Fergus Cleary drives his vintage Morris at the parade.

THOUSANDS of people lined the streets of Letterkenny on a glorious St Patrick’s Day to watch another successful parade.

There were more 30 than floats, bands and an array of classic cars in the annual parade that wound its way through the Main Street in a stream of colour and entertainment.

Crowds were gathering well before it commenced, despite a few showers and were rewarded with good weather and fantastic entertainment.

The parade was lead by the 28th Infantry Battalion with Captain Donal McCafferty taking the salute at the viewing platform.

They were followed by the Fire Service, this year with a chimney fire and sweets for the spectators.

Next up was the first of five bands, Letterkenny and District Caledonian Band, leading the way to cheers from the crowd.

Commenting on the parade this year Chamber President Gerard Grant, said “The Letterkenny St Patrick’s Day Parade is the first event in the year that brings together the whole community and this year was certainly a vibrant and colourful community event.
“While it is organised by Letterkenny Chamber, we rely on the help of the Gardai, Civil Defence, volunteer stewards and bucket collectors who give freely their time for the day.”
”This year the number of spectators lining the streets were at record levels again. We were delighted to see so many people from far and near supporting the parade and arriving early to get the best vantage points and they were rewarded with a large number of very varied, colourful and imaginative entries.”
“Community Groups, businesses, various clubs and societies spent many hours preparing their floats and everyone joined in the spirit of this very Irish celebration. There were a number of floats that had an international theme and we were delighted that they acknowledged our Irish diaspora.”

Winner of the Best Float, and overall winner of the Danny Doherty Memorial Plaque, was the Blue Ribbon dancers.