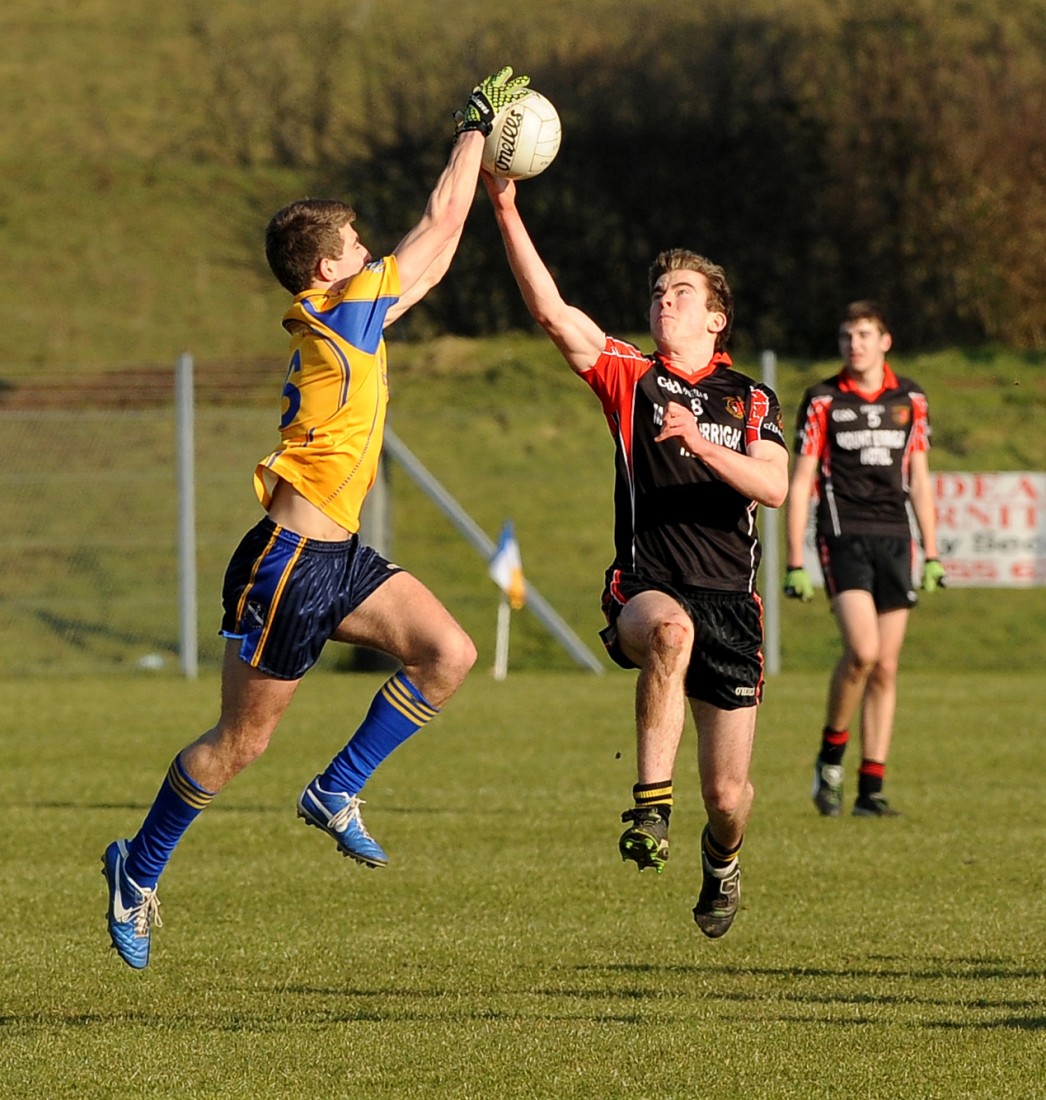 ONE thing we can say is for certain: the MacLarnon Cup will be coming back to Donegal on St Patrick’s Day.

The exact destination of the silverware will be determined on Monday morning when the students of St Eunan’s College Letterkenny and Colaistí Inis Eoghain meet in the final at the Athletic Grounds, Armagh (throw-in 11am).

It is the first year since De La Salle, Ballyshannon beat St Eunan’s in the 1996 version that there is an all-Donegal feel to the decider.

It brings the old dog of the MacLarnon road, St Eunan’s, against the new kids on the block, Colaistí Inis Eoghain, an amalgamation of the five secondary schools in Inishowen, formed in 2010.

St Eunan’s are four times winners of the competition (1968, 1979, 2000 and 2007), while the Inis Eoghain brigade are in dreamland in their debut season in the competition.

St Eunan’s manager Neil Gordon and the Colaistí Inis Eoghain boss, Sean Noonan, are not without their difficulties heading into the game.

Colaistí Inis Eoghain will be without Burt forward Georgie Kelly, who’s set to line out for the Republic of Ireland Schoolboys on Monday afternoon against Northern Ireland in the Centenary Shield in Sligo.

Noonan is also sweating on the availability of defender Tony McClenaghan, who was force to leave the action early on Saturday when playing for the Donegal minors in a challenge win against Monaghan in Cloghan. The centre-back did not train with the Donegal minors on Tuesday night and Noonan admits that the Moville man is in a real race against the watch.

Eunan’s have a number of niggles, but Gordon expects all of them to have healed by the time the hands rise for the throw-in on Monday morning.

Termon ace Daire McDaid (quad) has been hampered, but Gordon does not appear to have major concerns over the talented attacker, while goalkeeper Shaun Patton (back) and Daniel Clarke (ankle) are expected to be given the green light to play.

However, the game comes too soon for Caolan McDaid, who has only just returned from a broken finger.

Eunan’s have a proud tradition in the MacLarnon Cup and are in the final a year after being beaten by St Michael’s College, Lurgan, in the semi-final, 1-15 to 1-12.

“We lost a semi-final to Lurgan last year and were really disappointed with that,” Gordon reflected.

“We came back this year and the hope all along was to be still playing football on St Patrick’s Day. We have to make it count now that we’re here.

“We could have won that game against Lurgan – we certainly should have got at least a draw, but we didn’t deserve to lose it. The luck of the day went against us, but we’ve had to move on from that and bounce back.”

Along with those men, Gordon is able to now call upon goalkeeper Patton and Sean Hume, who has been racking up the scores along the way.

Their additions has been a big boost to the Letterkenny school. Gordon said: “Shaun Patton’s intelligence is immense. He sees what is going on all the time, he can vary his kick-outs accordingly and can find a man. He has a great presence about him too.

“Sean Hume is as good a place kicker as I know. He’s worth a good six or seven points to us. If we could just get a wee bit more out of him.

“He has worked very hard, in the last couple of games he’s been back making tackles, is chasing men down and putting in a big effort. He has a good appetite, good hunger for the game. He’s a player for the big stage. He’s got a good engine and puts in big endeavour.”

St Eunan’s topped their group to advance to the knockout stages, winning games against Holy Trinity, Cookstown (0-14 to 0-6) and St Pius X, Magherafelt (0-12 to 0-2) either side of a defeat by St Mary’s, Belfast.

The Letterkenny students scored a quarter-final win over St Columb’s Derry in Celtic Park before a comprehensive 4-10 to 0-5 win over Belfast school St Malachy’s sealed their passage into their first final in seven years on a day when Daire McDaid scored 2-3, with David Tyrell and Rory Carr netting goals.

While this is their first year in the competition, Colaistí Inis Eoghain have taken the MacLarnon by storm. 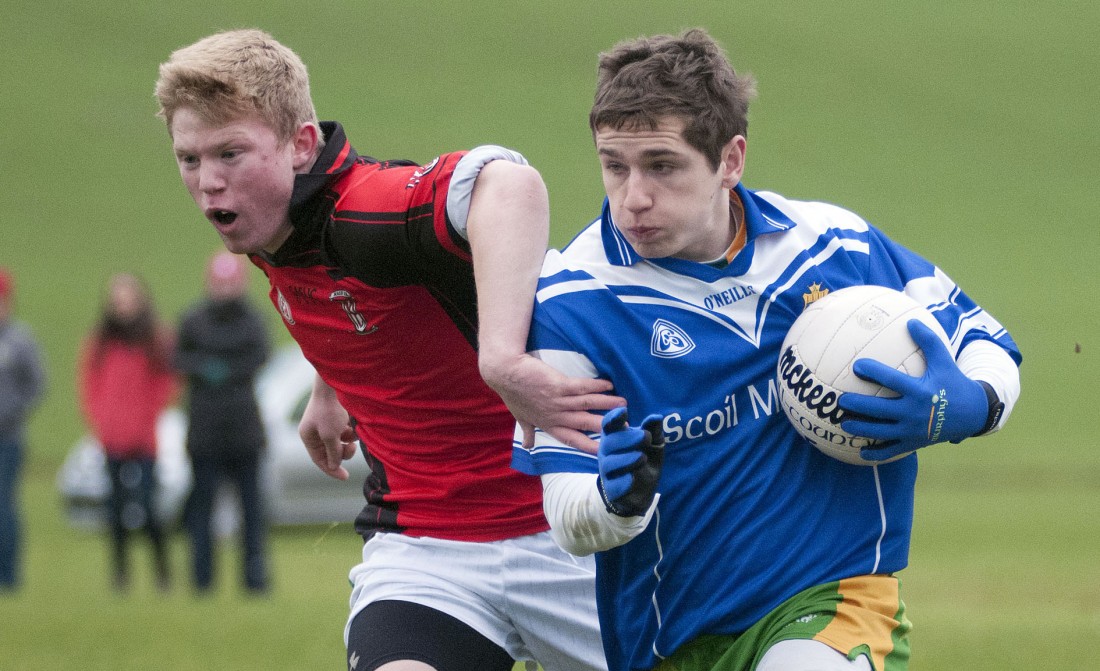 They emerged fromtheir group in convincing fashion, defeating St Louis, Kilkeel (3-11 to 2-7) and St Pat’s, Keady (1-8 to 2-4) before a turkey shoot against the already-eliminated De La Salle, Belfast saw them emerge 9-10 to 1-4 victors.

A hat-trick from Kevin McLaughlin – whose father is a cousin of the St Eunan’s manager – was the highlight of their quarter-final win over St Patrick’s, Downpatrick on a day when Donegal senior panelist Darach O’Connor was absent. O’Connor returned in some style, though, hitting 3-5 as Colaistí Inis Eoghain had their tickets for Armagh punched thanks to a 4-10 to 2-13 win over Patrician College, Carrickmacross.

O’Connor is the obvious marquee name, but there is more to them than ‘Jigger’ with the likes of John Campbell, Caolan McGonagle, Danny Monagle, Tony McClenaghan and Sean McHugh other names to keep an eye on.

If they have been the surprise package of the province then their manager, Noonan, certainly hasn’t been stunned by his side’s march to the final.

“Before I took on the job, I looked at the talent available and thought that the quality of player we had in Inishowen gave us the possibility of developing a good, strong team,” Noonan said.

“I thought that if we got everybody playing, and buying into it, our aim would have to be going out to win it.

“From the outset, that aim was put in front of the players.