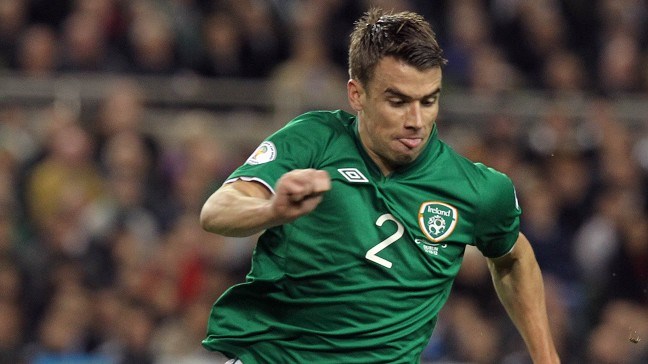 BY CHRIS MCNULTY AT THE AVIVA STADIUM

SEAMUS Coleman was left ‘disappointed’ on Wednesday night as the Killybegs man had a second-half to forget in the Republic of Ireland’s 2-1 defeat by Serbia in a friendly international in Dublin.

Martin O’Neill’s unbeaten record was ended after the Serbs struck twice in the second period, after Shane Long gave the boys in green an eighth-minute lead.

It was a night of some encouragement for O’Neill, but the absence of the experienced trio of Richard Dunne, John O’Shea and Robbie Keane laid bare the shallowness of this Irish squad.

Long could, and should have left the Aviva Stadium asking the Hungarian referee, Viktor Kassai, for the match ball, but the Hull City striker squandered two glorious chances that could have made it the night when he delivered reassurance about life after Keane. As it was, the 37,595 attendance wandered into the Ballsbridge night pining for the Dubliner’s return.

Coleman had an uncharacteristicly off night at the office.

Coleman has been the best right-back in the Premier League this season. Closest in the reckoning to take a place on that podium is Chelsea’s Branislav Ivanovic, but the Serbian captain was also left red faced, as it was from his mistake that Long opened the scoring. Ivanovic’s woefully short backpass was intercepted by the nippy Tipperary native, who cleverly finished past Vladimiur Stoijkovic.

Serbia levelled when, just three minutes into the second half, James McCarthy tackled the ball over the goal-line with the Irish rearguard at sea.

Coleman had played Aleksandar Kolarov onside in the lead-up to the goal and the Everton man erred for the second Serbian goal when he conceded possession to Nemanja Matic, whose bal to Dusan Tadic allowed him square to Zoran Tosic. After Tosic skewed a shot, Filip Dordevic kept his composure to beat David Forde with a crisp finish.

“They were two sloppy goals on our part. They got the confidence up and kept the ball really well.

“These things happen in games. You don’t like them to happen. Unfortunately they did. There is never a good time to concede a goal. When they got the goals they really got their tails up.  We were just chasing it after that and it was made very difficult for us.

“It was a tough game. We went in at half-time with a one-nil lead.

“We started well. Wes (Hoolahan) caused them some trouble early on. He found some lovely passes, but sloppiness cost us.”

Ireland don’t begin their Euro 2016 qualifiers until they face Georgia in Tbilisi on Sunday, September 7th.

Their next friendly is on Sunday, May 25th in Dublin.

Coleman said: “It would have been nice to win. We’re not playing for points, but winning games breeds confidence in the side. We’re disappointed not to win and we’ll just move on to the next game and keep building for the qualifiers.”

He returns to club duty on Saturday when Everton take on Arsenal at The Emirates in an FA Cup quarter-final.