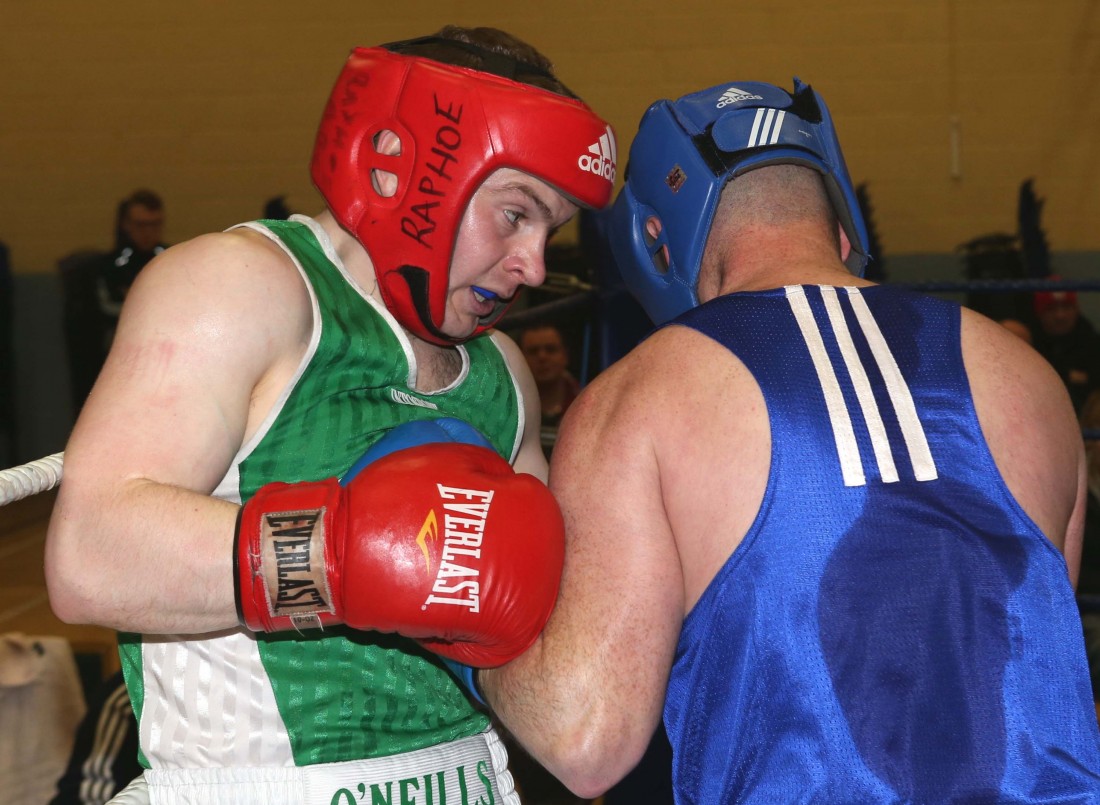 Ryan Mc Cullagh of Raphoe BC in action against James Bonner of Dungloe BC.

By Chris McNulty in Castlefin

THE good folks of Castlefin have waited since 1998 for amateur boxing to return to the town – and on Saturday night the Raphoe ABC’s tournament didn’t disappoint.

In a packed hall at the impressive CPI Centre, the Raphoe club staged a night that made the old adage ring true about good things coming to those who wait.

Ryan McCullagh had a fourteen-year hiatus from the ring, but the Raphoe light-middleweight dusted off the cobwebs in fine fashion here.

The natives wound the clock back all the way back to a time when McCullagh was twelve years old for his last competitive bout. He turned 26 just last weekend and on Saturday night he took the cheer of the night after defeating James Bonner of Dungloe.

The diminutive and quick-footed McCullagh made clever use of his jabs and put Bonner on the back foot with a series of tasty blows.

Bonner played his part in a tight struggle, but McCullagh took each of the rounds on a 29-28 verdict to announce his return with a bang.

Seven of the ten contests went the way of the home boxers on a night when the sport was making its first appearance in Castlefin since the Twin Towns club staged a show in St Mary’s Hall in 1998.

Boxer of the Night was Liam McMonagle of Raphoe, who took a unanimous decision from the judges in a schoolboy contest at 42kgs  with Conor Doherty of St Bridget’s, Clonmany that was perhaps tighter than the verdict suggested.

McMonagle was the deserving victor, though, having laid the platform for himself with a strong start to the bout and the twelve-year old made good use of the minimal chances afford by Doherty.

The Clonmany man began the second with a flurry of shots that exhausted the red corner man, but McMonagle recovered admirably, settled and came good at just the right movements. Despite Doherty’s movement restricting McMonagle’s advances, the Raphoe puncher got enough away to take the decision of all the ringside judges.

Cruiserweight Gerard Crawford saved his best wine for last to defeat Bryan Ward (Letterkenny). Each had taken a round to set up a winner-takes-all third round and it was here that the Strabane native Crawford produced the sort of form that saw him named as the Raphoe club’s boxer of the year in 2013.

Danny Duggan exacted a measure of revenge on Jordan Simpson from the Rochesters club in a rip-roaring 70kgs bout. They needed no introduction, the pair having been in an epic scrap a few weeks ago at The Du Pont in Derry.

Again, they were in each other’s eyeballs for the entire six minutes, with neither willing to be the first to blink the eyelids.

With Simpson having won their last meeting, revenge was the dish on Duggan’s menu for their rematch – and the St Johnston man served it up in style here.

Duggan was out of the blocks in blistering fashion, the 30-27 first round in the red corner’s favour outlining his control of proceedings in that two minutes. It certainly wasn’t straightforward with Duggan having to reach for the depths of the reservoir having been put to the pin of his collar.

Simpson hit back to take the second round, but Duggan shook the head clear for the cracking closing round, which he won 29-28, much to the delight of the home followers.

Dungloe southpaw Daragh McCole was immense throughout his heavy-handed meeting with Dennis Lafferty. Both had competed in the recent All-Ireland Colleges Championships and it was the eye-catching McCole who was on song on Saturday.

With Lafferty spending a little too long on the ring’s periphery, McCole made hay and was the clear 30-27 winner for all three rounds of a lively lightweight tussle.

Conor Coll was magnificent in a 60kgs clash with Letterkenny’s Aaron Coyle as the Raphoe hitman was on top from start to finish, a 30-26 opening round setting the tone. Coyle took a count at the end of the second round after Coll landed a monster right. A superb third concluded with Coll unloading the gun again to send the unsteady Coyle shaking for the ropes.

The night, sponsored by Mike Kelly of Sheercloon Developments, began with Niall Brady-Devenney from the newly-formed Bluestack ABC in Ballybofey scoring a split-decision win over Raphoe’s Danny Roulston in a meeting of two youngsters making their competitive bows upon the canvas.

Brady-Devenney, with those unmistakable locks peering from beneath his headgear, landed a neat series of lefts between Roulston’s guard across the three rounds, blows that would ultimately net him his win.

Raphoe man Roulston can be encouraged by much of his rugged display and with a little more aggressiveness in the closing round he might well have swayed the outcome.

A strong final round saw Liam Lynch get the host club’s first win of the night, when he overcame St John Bosco’s Mark Campbell. In a blow-for-blow contest, Lafferty had the edge when he burst from the stool for an explosive final round.

Dunree’s Aaron Kelly recovered from being knocked to the floor right at the end of the first round to overcome Raphoe’s Brendan Boyle in a cracking contest. Neither gave an inch, with Kelly running out the narrow victor when the sums were totted.

In-form Oran Devine had just too much for Hugh Doherty (St Bridget’s, Clonmany). Devine, who represented Donegal at a recent inter-county tournament in Kildare, was underfire early on, but once he bared the gumshield as he went to work, he took full advantage of Doherty’s loose stance for a deserved win.

There were also five high-quality exhibition bouts to get the evening off to a cracking start, including the all-female, all-Raphoe meeting of Rocha McCullagh and Marie Sweeney.

Another of the no-decision meetings saw Raphoe ace Cody Lafferty demonstrate the cache of talents that have won her four titles already this season, the quick-fire Ballindrait girl offering a glimpse of the dynamite-filled fists to the large crowd in attendance.