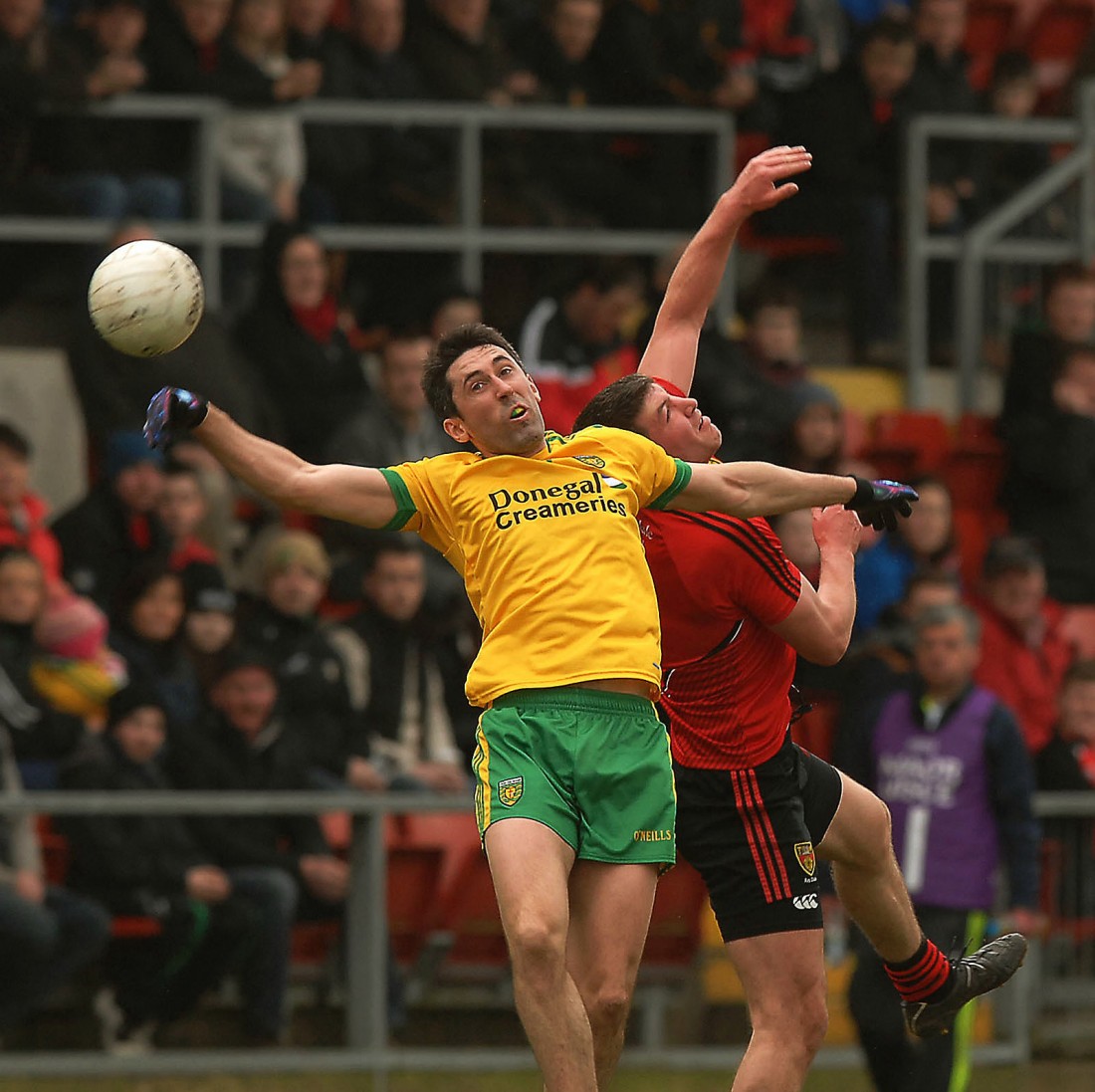 A FIRST defeat of the League season leaves Donegal firmly in a scrap for promotion heading into the final two series of games in Division 2.

Down were full value for a two-point win at Pairc Esler on a day when Donegal played second fiddle for too long.
Donegal misfired completely, hitting twelve wides and dropping another five efforts into the hands of Down goalkeeper Shane Harrison.

Down led from start to finish and were much more economical with Niall Madine’s goal in the 13th minute the key score as James McCartan’s side moved to join Donegal and Monaghan on seven points at the top of the table. There was no late rescue here as there had been when Michael Murphy scored a dramatic, late equaliser to deny Meath in Ballybofey last weekend.

Having been out-foxed by Meath in winning primary possession, Donegal again found themselves chasing the ball from their own kick-outs, with Kevin McKernan the stand-out here, while Mark Poland’s direct side caused quite some heartache for the Donegal rearguard.

Madine’s goal gave Down a 1-6 to 0-5 lead at half-time and even though Donegal began the second half well a scoreless twenty-four minutes by Jim McGuinness’s side, a period where they hit four wides in a row, proved costly.

The writing had been posted early on. With Conor Laverty clipping over the opening score, Down were in a lead they wouldn’t relinquish.

They pulled the chips to their side of the table in emphatic fashion with the game’s opening goal.

Full-back Brendan McArdle picked up a break in the middle of the park and cut a swathe through the Donegal rearguard. With a firing squad lining up on the edge of the square, it was Madine who tucked home after taking receipt of Donal O’Hare’s ball across goal.

As concering as the narrative was becoming for Donegal, it might well have been worse as Down should have had a penalty in the eighth minute when, after Laverty and Poland combined, the former was hauled down by Paul Durcan.

Somehow, referee Cathal O’Hagan waved away the penalty appeals, with the Donegal netminder a touch fortunate to escape sanction.

Enraged Down did net when Madine slotted home in a busy goalmouth to give the Mourne side the edge and there were worrying signs agains for Donegal with Down well on top around the middle third when it came to winning possession.

It was the 18th minute before Dermot Molloy opened Donegal’s account, slicing over after Eamon McGee superbly forced a turnover to get the ball in Donegal hands.

But Down’s response was instant with midfielder Kevin McKernan sweeping over from out on the left flank.

Michael Muprhy, with a majestic effort from the tightest of positions, and Molloy each had scores cancelled out by Mark Poland and O’Hare (free).

Frees by Murphy and McFadden kept Donegal ticking along, but two quick-fire points by Poland and Madine ensured that Down had a four-point lead as they headed for the sanctuary of the dressing room.

Martin McElhinney slotted over 32 seconds after the re-start and when Leo McLoone showed a neat set of skills that wouldn’t have been out of place on a basketball court to reduce the margin to two there was a sense that Donegal had found their way.

However, they were back where they’d started as O’Hare (free) and Conor Garvey restored Down’s four-point cushion.

Murphy sailed over a ’45, but a barren spell followed with neither side managing to raise a flag for some 21 minutes – 24 in Donegal’s case.

Even with a triple substition, sending Neil Gallagher, Patrick McBrearty and David Walsh into action, Donegal just couldn’t get a foothold.

Their attack had beem off colour and for the final ten minutes Jim McGuinness sent on young Darach O’Connor – who has a busy few days ahead with the MacLarnon Cup final and a game with the Donegal Under-21s to come – in a bid to salvage a goal.

Laverty posted to give Down a four-point lead again and the game was up for Donegal. A long-range effort by Gallagher and a McFadden free, won by O’Connor, brought Donegal to within striking distance.

However, Laverty took a black card for the team around halfway to cut short McBrearty’s intention to make an incision. McLoone and Mark McHugh combined from the free, but when McLoone’s floated ball into the square landed in the hands of veteran sub Benny Coulter Down were victors and vanquished Donegal left to ponder a first defeat of the campaign.