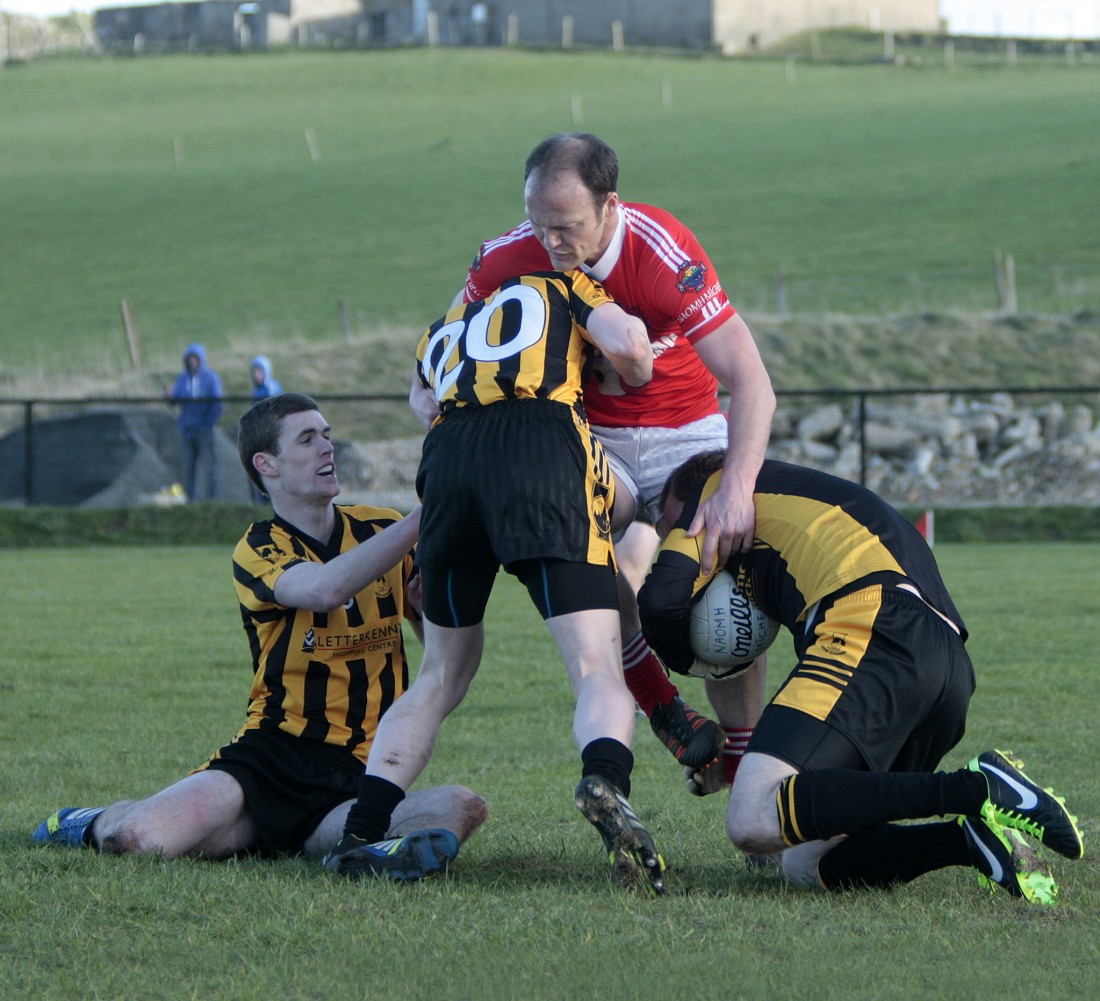 BY CHRIS MCNULTY AT THE BRIDGE

ST EUNAN’S came good in the final ten minutes to defeat St Michael’s at The Bridge and register the opening win of Maxi Curran’s tenure.

The defending League champions hit five points in that period to turn this one on its head.

Before Donnacha Gallagher posted St Eunan’s ahead in the 58th minute, the black and amber had been ahead for only 90 seconds, that being in the opening exchanges of the second half, only to have their momentary march halted when St Michael’s once again took a command.

Lee McMonagle’s first half penalty had kept St Eunan’s right in it. McMonagle’s major in the 20th minute was his side’s first score, but a mixture of the young and old combined to set the O’Donnell Park residents up for a first day win.

Gallagher kicked six points, three of them in that late purple patch, as St Michael’s were left to reflect on a game they could have closed out.

After they raced into an early four-point lead, they found themselves pinned back as McMonagle’s penalty made for a tense struggle.

With both under new managerial orders, Tony Wilkinson also making his first League appearance as the St Michael’s manager, there were signs that the sands of change were flowing. St Michael’s might have lost, but the locals could point to two penalties that weren’t in the second half.

Ten minutes into the second half, with the teams level, Daniel McLaughlin gave a quick transfer to Lee Martin Carr. The diminutive attacker jinxed one way, then the other and, although he looked to have been fouled by Caolan Ward, the St Eunan’s full-back, referee Robbie O’Donnell dismissed the claims.

In the closing stages, again with the scores equal, a St Eunan’s hand appeared to touch the ball on the ground. St Michael’s cried foul, but again the Naomh Muire official gave a stern shake of the head.

The initial game-changer had arrived in the first half, when O’Donnell did award a penalty.

Conall Dunne scythed through the heart of the St Michael’s rearguard and had the jersey tugged as he rampaged into the danger zone.

O’Donnell had allowed an advantage with Dunne bearing in on goal, but pulled it back for the spot-kick. McMonagle neatly tucked the penalty to Ciaran Gallagher’s bottom left-hand corner and it was game on.

Before then there had been a danger that St Eunan’s were going to find that the tie had run away from them.

Lee Martin Carr swept the hosts ahead after eighty seconds before a sumptuous effort by McFadden doubled it up. Another two from Donegal ace McFadden helped St Michael’s into a four-point lead by the 17th minute, with St Eunan’s finding openings hard to come by in those early exchanges.

But McMonagle’s penalty hauled them back into it.

Gallagher drew the visitors level when he thumped over and the full-forward magnificently sailed over a free from beyond the ’45 after Christy Toye converted a free at the other end. Gallagher ought to have put Eunan’s in front at the break, but he pulled his close-range free to the right of the target after Kavanagh was fouled by Stephen Black.

Eunan’s nosed ahead thanks to Gallagher, six minutes into the second half, slotting over after McFadden and McMonagle exchanged points. They were in front for the first time, but their lead was short-lived, as Michael Cannon restored parity

Colm McFadden and Conor Gibbons swapped frees, but St Michael’s looked headed for the win as they pushed ahead by two again. Antoin McFadden tucked over when he might have elected to shoot a little lower after a lung-bursting run by Michael McGinley, himself on the mark to make it a two-point game.

McGinley’s was St Michael’s final point as their handling, fluency and passing abandoned them late in the day.

With Jordan McBride and Oisin Carr from the MacLarnon Cup-winning St Eunan’s College team on from the off, Curran also introduced Conor Morrison and Michael Miller off his bench in a clear sign that the new boss will give youth its head.

But when it came to the crunch it was the old heads who did the business. With Rory Kavanagh giving them a foothold, they got back on an even-keel through Gibbons and Gallagher.

Carndonagh native Gallagher bent over to put Eunan’s ahead and it was he who placed the icing on the cake after the clincher was swung by Kevin Rafferty, his point from distance putting two between them as the clock entered red time.