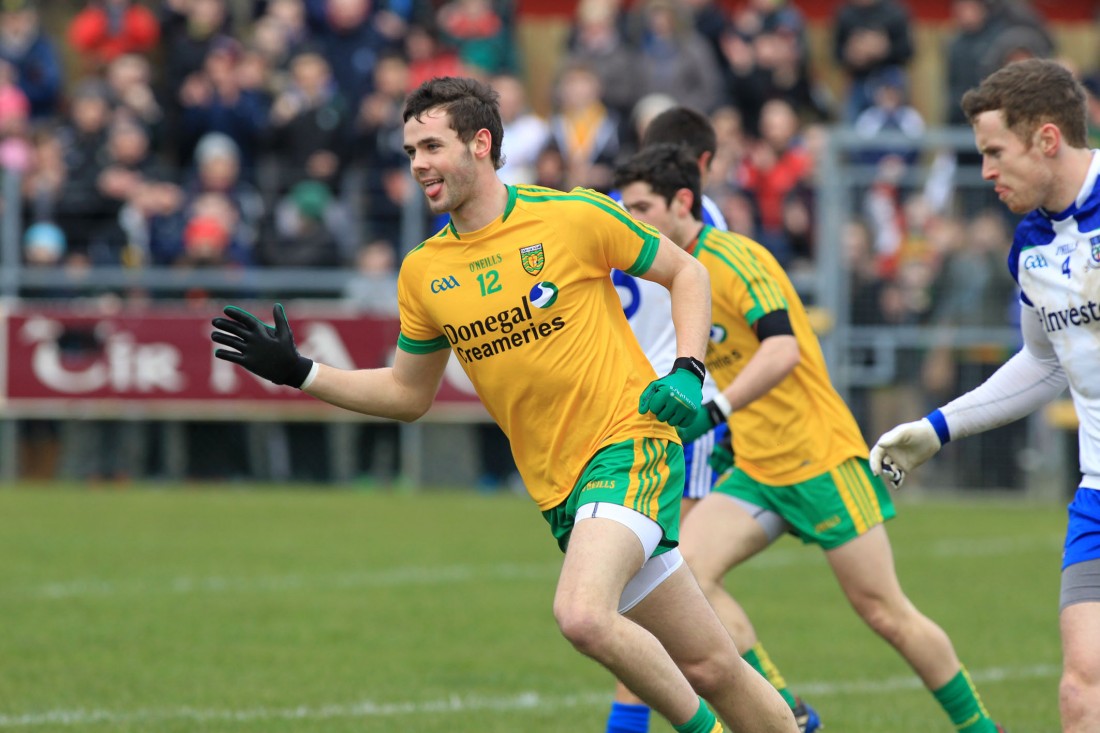 AN hour before throw-in, Fergus McGee, the public address announcer at O’Donnell Park, confirmed to patrons that the 2,700 seats in the stand had all been occupied.

By the time Barry Cassidy got proceedings underway, 6,500 spectators had taken station for a repeat of last year’s Ulster final, expecting fireworks.

As League attendances go, it was impressive. Remember, only three years ago 7,385 turned up to Ballybofey to watch Donegal defeat Antrim in Jim McGuinness’s first Championship game as the Donegal manager.

In last year’s provincial decider, Monaghan laid the blocks early on with a blistering start, going five up before Donegal got a sniff of a score.

Goals by Odhrán MacNiallais and Colm McFadden saw Donegal take a strong grip here as Donegal returned to the top of Division 2, having made way for Down overnight. MacNiallais drilled home just seven minutes in and when McFadden netted eleven minutes later Monaghan were consigned to defeat.

Donegal were dominant in the first-half here, but could have been further ahead than the six points at half-time. They made an uncharacteristic amount of unforced turn-overs and did kick a couple of needless wides, but that is not to take away from what was a comfortable afternoon on which they were very impressive in spells.

Given that they operated against the elements for an hour, it was certainly not to shoddy to have posted a seven-point win over the Ulster champions.

MacNiallais was superb while Ryan McHugh delivered another reminder of his talents. Both are players of some refinement who slot quite nicely into Jim McGuinness’s jigsaw, with the Donegal boss surely encouraged again by another fine display by his side to continue their unbeaten League form.

Donegal had been in form, posting away wins in Laois and Galway in their opening two fixtures, coming into this, their first home League game of the year, with a healthy points difference of +20.

McGuinness kept faith with the team that started three weeks ago in Salthill, rewarding the likes of Martin McElhinney, Christy Toye and Dermot Molloy – as well as McHugh and MacNiallais – for good recent performances.

They were to the fore as Donegal took command of things early on in a clear indication that this was a side meaning business.

Barry Cassidy played a good advantage after involvement by McHugh and Rory Kavanagh, and it was captain Michael Murphy who off-loading to the scampering MacNiallais. With the sea parting before him, the in-form Gaoth Dobhair man galloped on before unleashing a powerful effort beyond Rory Beggan.

It was a purposeful start by Donegal, still bruised by the excruciating memories that have lingered from Clones last July.

In the 18th minute, Donegal netted a second goal. While Molloy will be awarded the assist, McHugh deserves a fair dollop of credit, too, for it was from a magnificent pass by the Kilcar man that Donegal carved open the Farney rearguard. Molloy took receipt of possession out on the left, before bursting in at a tight angle to lift across goal where the waiting McFadden turned home to open up a six-point lead.

Donegal were dominant by now but could perhaps have been a little more economical in attack.

That said, they were well on top, particularly in the physical stakes, where Kavanagh, McElhinney, Toye and Murphy gave Donegal a powerful foothold in the middle third.

McElhinney kicked a fine point from just shy of the ’45 after the St Michael’s man had sold a clever side-step to deceive his man and set up MacNiallais for a well-worked score.

Monaghan began with seven of the team that started last year’s final, with Kieran Hughes coming in as a late inclusion having not been named in the side, but Malachy O’Rourke’s team couldn’t recover from the set-backs of conceding those goals.

All-Star McManus was the sole scorer for the visitors in the first half and the Clontibret ace tucked over a late brace to leave the goals between them at the interval, 2-4 to 0-4.

Donegal might have had a third major in the 42nd minute, but Rory Beggan was out to smother from Leo McLoone after he was played in by a neat tap-over pass by sub Darach O’Connor, on his League debut.

In a show of the renewed depth at McGuinness’s disposal, O’Connor was on in a triple substitution that included Neil Gallagher and Patrick McBrearty.

MacNiallais had hit another fine effort just prior to that and McBrearty landed an excellent brace of points, both of them from long range.

Fintan Kelly and Jack McCarron popped over two inside a minute, but Donegal were suffocating the supply lines to the now starved McManus inside.

To supplement McBrearty’s pair of points, captain Michael Murphy hit his only score of the afternoon with a 50th minute free and McFadden polished off a fine move that involved McBrearty, Neil McGee and Anthony Thompson.

Monaghan did break the seal open, but Dermot Malone failed to get any conviction on his shot, with a tame effort easily saved by Paul Durcan, only for the referee to deem the ‘keeper to have been outside the 13m line and McCarron was presented with a ‘gimme’ of a free.

Goalkeeper Beggan, from a ‘45, Dessie Mone and McManus clipped over for Monaghan late on, but this one was never in doubt.

Donegal had another sight of goal in the closing moments, but they went for the juggular with McLoone, O’Connor, McFadden and McGlynn all involved in a goal-mouth game of pinball that Monaghan eventually survived, though McGlynn limped off with an injury that was not thought to be serious by the management.

MacNiallais fittingly finished well, setting up Declan Walsh’s point and then adding the cherry himself, funnelling forward to take his tally to 1-3 and firmly scrawl his name upon the page marked: ‘First XV’.

Ryan McHugh’s was another contribution of some note, Martin McElhinney showed up well again and Rory Kavanagh performed well until his withdrawal.