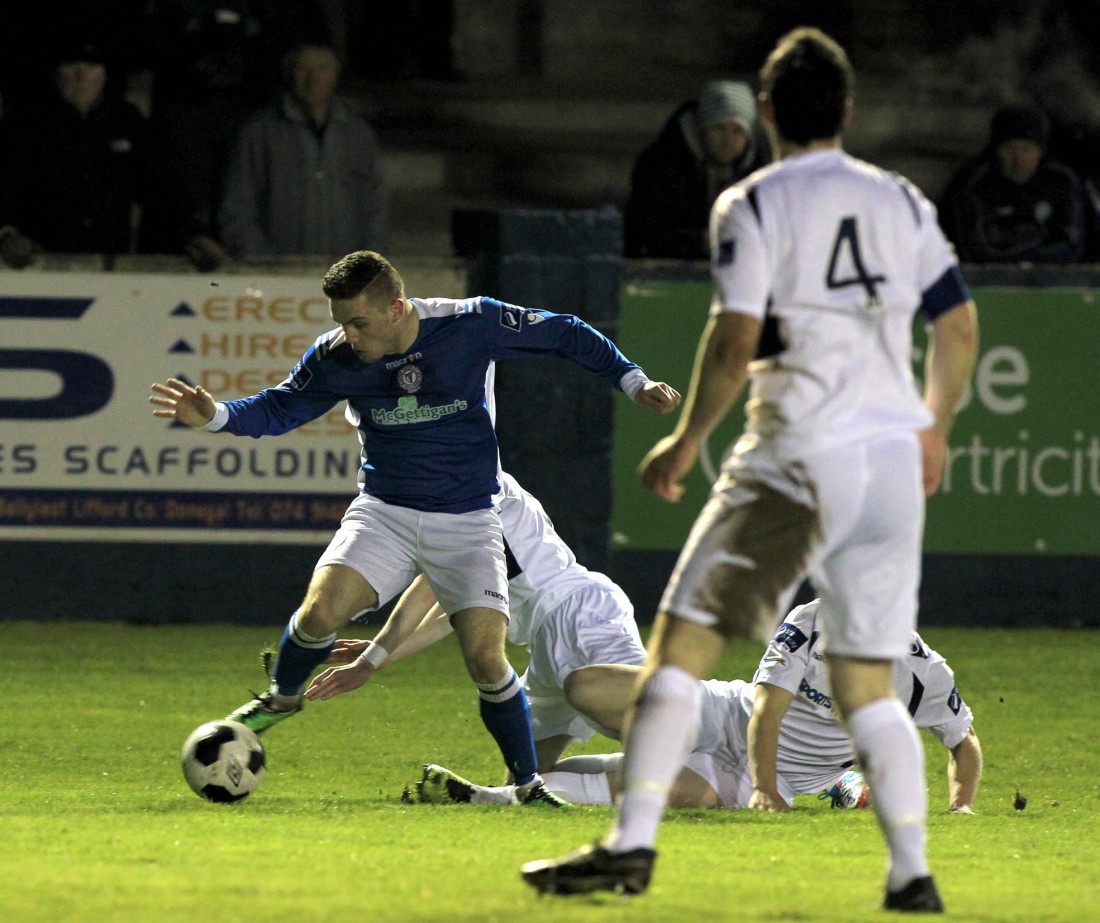 FOR Ollie Horgan, the over-riding feeling here will likely have been one of relief.

Ten-man Cockhill Celtic proved far from obliging opponents and pushed Finn Harps to the pins of their collar in a tense EA Sports League Cup opener in Ballybofey.

Not even when Ruairi Keating netted the third Harps goal seventeen minutes from the end could the new manager begin to consider the first competitive win of his tenure.

Malachy McDermott, the FAI’s intermediate player of the year in 2013, had netted midway through the second half and it proved a nervous finish for the home faithful when substitute Aidan O’Donnell fired home in the 85th minute.

First-half goals by Sean McCarron and an own goal by Liam O’Donnell should have made it a more comfortable experience, but when McDermott headed home in the 66th minute the seeds of doubt began to bloom.

Two minutes later, however, a moment of petulance had disastrous consequences for Cockhill, as sub James Bradley – only five minutes after his introduction – was shown a straight red card for throwing the ball at the referee, Paul Duddy.

When Keating, after a defensive lapse from Cockhill, rounded Gavin Cullen for the third, Harps had breathing space and it was just as well for O’Donnell converted after Conor Keddy’s volley was charged into his path.

Horgan had made four changes to the team that had begun the scoreless draw with Waterford United at the same venue three evening previously, with ex-Schalke 04 underage player Graham Fisher making his first start in Harps blue.

James Doherty, Tommy Bonnar and Jonny Bonner were the others elevated into the first XI, as the hosts bid to avoid having falling into the same trap as Galway United did in 2011 when Cockhill scored a 3-1 win at Terryland.

Cockhill’s hopes of an upset suffered a hammer blow with only 90 seconds gone as Sean McCarron turned home from eight yards to give Harps the lead. It was a fine move that led to the Derryman opening his account for the season,

Tommy Bonnar made the play for Pat McCann, who surged to the byeline to square for McCarron, who slotted past Cullen.

The big goalkeeper was one of four ex-Harps men in a Cockhill side managed by former Harps ace Donal O’Brien, with Johnny Havlin, Garbhan Friel and Gerry Gill also included.

The 2013 Ulster Senior League double winners were on the rack when Harps netted a second in the 14th minute. McCarron turned provider on this occasion as his superb cross ricochet off Liam O’Donnell and past Cullen with McCann breathing down his back.

McCann himself should have made it three when he was fed by a clever cross-goal by Packie Mailey, but the in-rushing American fired over.

Cockhill came a hair’s breadth from pulling one back, but Havlin’s header beat Winn, only to rocket down from the crossbar, Harps clearing with all eyes upon linesman Joe McHugh, who ruled that it hadn’t crossed the line.

Three years ago Winn played for a Galway United side humbled 3-1 by Cockhill in this competition, but there was no repeat here, much to the relief of the natives.

Harps upped the ante again with McCarron warming Cullen’s hands just after the hour, the ‘keeper punching away a powerful effort before Fisher’s diving header was over the target from a Jonny Bonner cross.

McDermott pounced at the back post to head home from Gill’s corner and it was game on when O’Donnell hit the bottom corner after Keating looked to have sealed a comfortable passage.

Harps held on to squeeze into round two. Their next possible opponents include Premier Division big guns Sligo Rovers and Derry City, as well as the winner of tomorrow night’s clash of Galway FC and Mayo League.