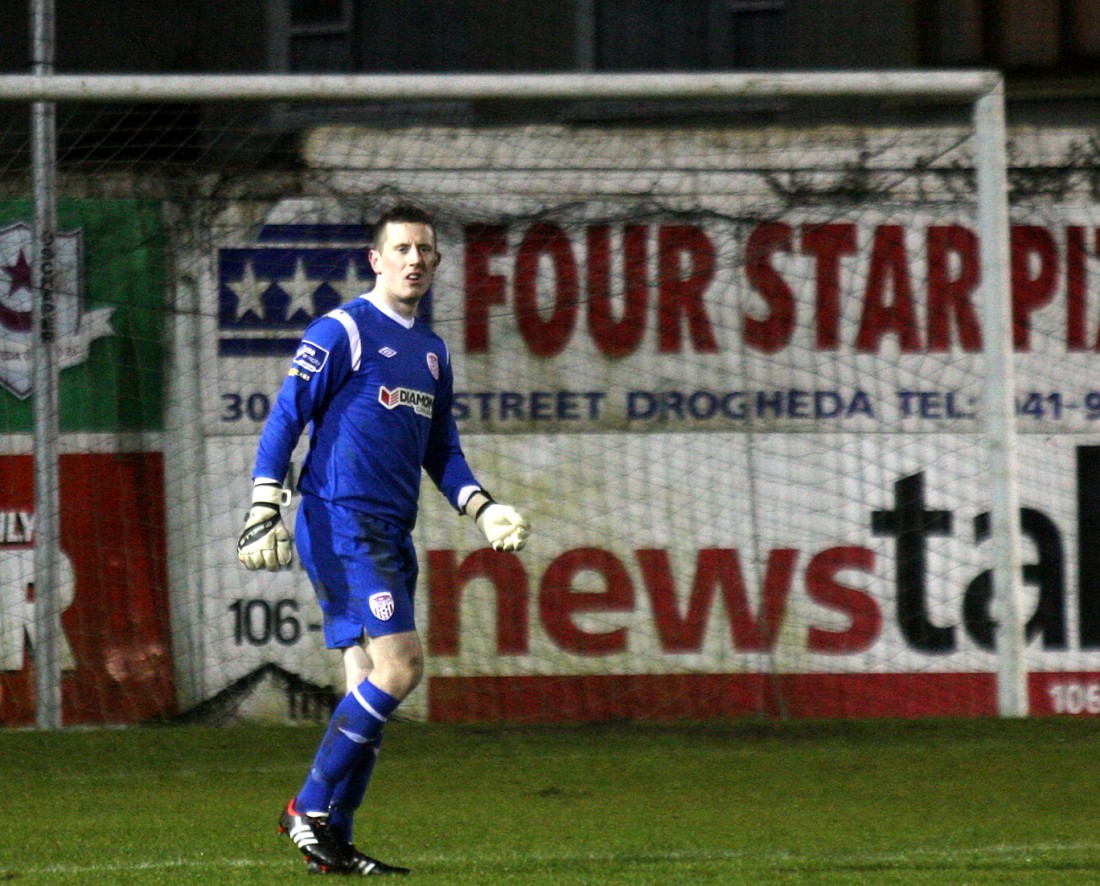 THE chance arrived much quicker than he’d expected, but Ciaran Gallagher wants to do all he can to keep his place in the Derry City team.

The Raphoe man, signed by the Candystripes from Finn Harps in December, made his Premier Division debut last Friday night in the one-all draw at Drogheda United.

With Gerard Doherty missing out because of a hamstring injury, Gallagher was elevated and could keep his place when the defending League champions, St Patrick’s Athletic visit the Brandywell tonight.

City, under new manager Roddy Collins, have taken just two points from their first three League games of the season ahead of fixtures against Pat’s and Sligo Rovers.

Gallagher ran the gauntlet in December when he agreed to make the move to Foyleside, bringing to an end a five-year spell at Harps, the club he supported as a boy.

“I knew what would come with the decision,” Gallagher says.

A few barbed digs went his way, but it was to be expected. He stood on the Finn Park terraces for long enough to know the move wouldn’t sit well with the hardcore of Navenny Street.

It wasn’t just that he was leaving Harps that grated, but was heading for their fierce rivals, who already happened to have a goalkeeper in Doherty.

“You expect that in football,” Gallagher says.

“I had to do what was right for me, though.

“It was tough to leave Harps, of course it was. I sat down and spoke to my dad (Aidan) a few times about it.

It was a difficult decision to make. I spoke to Ollie and his plans were excellent. He is very ambitious about where he wants Harps to go.

“It was strange looking at the build-up to Harps’ season and not being a part of it. I keep an eye on Harps and with their game on Saturday this week hopefully I’ll get to pop up and watch them.”

From his debut, just two days after his seventeenth birthday in 2009, in a 1-0 defeat to Sporting Fingal, until his departure, Gallagher made 127 appearances for Harps.

Capped for the Republic of Ireland at Under-17, Under-18 and Under-19 level, he got a taste of the professional lifestyle while on international duty.

Former Harps manager Peter Hutton and goalkeeping coach Declan McIntyre were recruited by Collins and it wasn’t long before they were knocking at Gallagher’s door.

“The full-time training was what swayed me to sign for Derry,” he says.

“I got a taste of that when I played underage with Ireland. It was great being up early and training twice a day. I loved it. At twenty-one I need that. Unfortunately, the resources aren’t there at Finn Harps to be full-time. I was doing as much as I could when I was at Harps, but coming in every day and training with the team, that can only improve you.

“Peter was great last year with me too. I was going through a lean spell where I was struggling for confidence. He really helped me to get through that.

“I knew going in that I was going to be the number two goalkeeper to Gerard Doherty. It was a chance at full-time football, though. It was the full-time that pulled me towards Derry City. Working with Peter Hutton, Roddy Collins and Declan McIntyre has been a great learning experience and I’m always learning off Ger’ – he’s one of the best in the business.”

He’ll turn 22 on Tuesday and can already feel the benefits of the daily routines. Under the watchful eye of Pearse Lafferty and Michael Hegarty, Gallagher reckones he’s already ‘fitter, stronger and sharper’.

When the call came last Wednesday, with Doherty confirmed as an absentee, Gallagher was ready.

“In these situations you always have to prepare yourself that you’re going to start,” he says.

“That always has to be in your mind because you just don’t know what could happen in the warm-up.

“I wasn’t too nervous. I was pretty confident going into the game. I had played in Drogheda with Harps last season so I knew what to expect, knew the pitch was a tight enough wee place. That helped.

“After going one down so soon after half-time we were happy with the point. It’s early days yet and, like the manager has said, we’ll turn those points into wins.”

Derry secured a draw when captain Cliff Byrne scored a 75th-minute equaliser to cancel out Michael Daly’s goal in the opening minute of the first half.

Ahead of their joust with St Patrick’s Athletic, with Derry craving their first win of the season, Gallagher wants to make the most of it if selected again by Collins.

“I put in big work in pre-season and just want to take my chance now,” he says.

“I didn’t think that I did my chances any harm at all.

“Still, I’m only in the door and I know highly-regarded Ger’ is in Derry. Of course I’d be disappointed if I didn’t play against Pat’s, but I wouldn’t be down-hearted.”