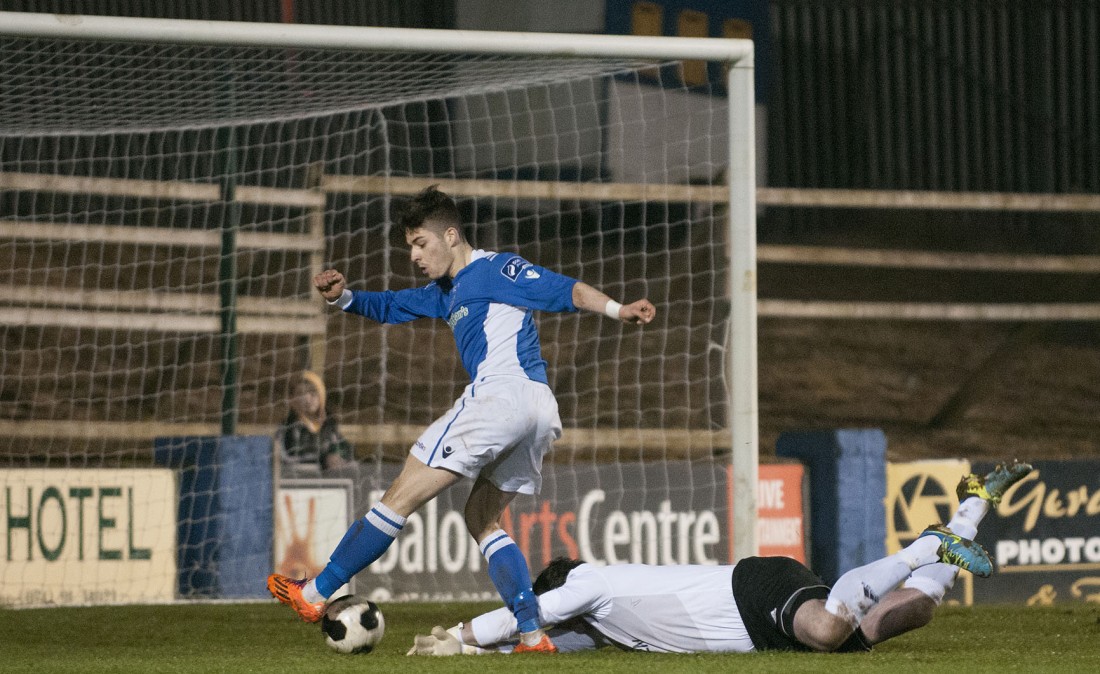 RUAIRI Keating savoured his first Finn Harps goal on Monday night and the Westport native is aiming to make the most of his loan spell in Ballybofey.

The 18-year old Sligo Rovers striker will be on loan at Harps until the summer transfer window in July and could have his term extended should the relevant parties so wish.

Keating penned a professional contract with Sligo in January, but has been loaned to Harps in a bid to gain first-team experience.

On Monday night, Keating netted the first goal of his Harps career, side-stepping Gavin Cullen and slotting home coolly to put his new side 3-1 in front of Cockhill Celtic.

The goal helped steer Harps into the next round of the EA Sports League Cup. Keating has shown good promise since making the switch during pre-season.

“I’m happy to get my first goal for the club,” he said on Monday night.

“It was a nice feeling. The ball dropped and I had a job to do – put it in the net. It’s a team game and it isn’t about any individuals. I’m just grateful that we got through it and into the next round.

“It was a good game. They were up for it and they wanted to win it. We had to keep our heads and the early goals did us a big favour.

“Ok, we didn’t kick on like we should have, but we dug in and worked hard. Thank God we got the win at the end – that’s what it’s all about.”

It was there that Horgan first spotted the potential of Keating and the new Harps boss was keen to snap up the youngster’s signature.

Keating said: “I worked with Ollie when I played with the Irish Schools team and I enjoyed the experience. Ollie is a good guy, he’s very straight and he looks after me well. Everyone wants to work hard for Ollie.

“I’m loving it here. It’s early stages. I’d been working hard in pre-season and was looking forward to getting the League started. I want to keep working hard for the club and keep enjoying myself.

“It’s about getting experience, getting game time and I’m grateful for getting that chance. Being able to come up here and get football is brilliant. I want to show people what I’m all about.”

Monday’s win opens the possibility of a meeting with Keating’s parent club, Sligo, in the next round.

The player smiled: “That’d be a nice one, wouldn’t it? I should be alright to play if it did happen.”

Keating was Sligo’s top scorer last season in the Under-19 League and is highly rated by Ian Baraclough and Gavin Dykes.

Following last Friday’s 0-0 draw with Waterford United, Harps head for Dublin on Sunday to take on something of an unknown quantity in Shamrock Rovers ‘B’, one of the newbies of the First Division.

Keating said: “It will be a tough year with the likes of Shels, Shamrock Rovers, Galway and Longford. There are a lot of good teams in it. It’d be nice to be there or thereabouts.”

Crowds have been positive for the Donegal side on their opening two nights of the campaign. 823 came through the turnstiles last Friday and on Monday night Harps had a confirmed attendance of 426.

Keating has been impressed by the support. He said: “There was a big crowd here on Friday night. It was great to see that so many people are interested. We just want to give them what they deserve. If we can get up the table with a few wins everyone will be happy.”