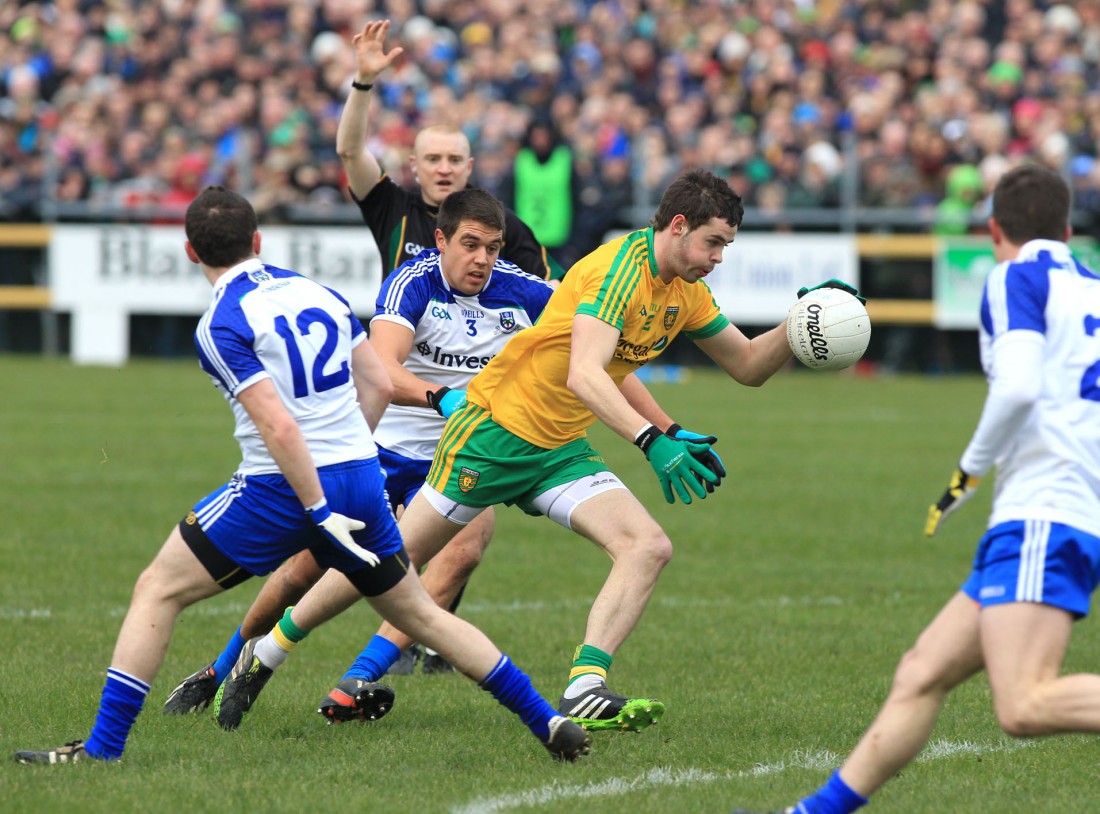 Donegal’s Odhrán Mac Niallais breaks through the Monaghan defence to score a goal.

ODHRÁN MacNiallais arrived into 2014 having played around a half-an-hour of meaningful senior inter-county football for Donegal, but in the first six games of the campaign the 21-year old Gaoth Dobhair man has seen all bar eight minutes of action in the team.

MacNiallais was given the Dr McKenna Cup to prove his worth and he grasped the chance with both hands.

Having impressed against Galway and Laois he retained his place yesterday for the rematch of last year’s Ulster final with Monaghan. In a half-forward line that many have said should be delivering more, MacNiallais hit 1-3, with his seventh-minute goal netted with all the poise and precision of a seasoned senior player.

On a weekend when the Gaoth Dobhair parish bid farewell to one of its fondest sons, the great Francie Carroll, it was perhaps fitting that another gifted man crafted from Magheragallon sod would step in with a match-winning display.

There is little that will faze the modest west Donegal man.

“I got the ball, looked up, saw the space and – I can’t remember what I’d done before that – I was going to take the point,” he begins to explain the passage that led to him smashing past Rory Beggan, the Monaghan goalkeeper.

“The space opened more and I just said I’d blast it in to see what happens.

“It’s all about the team’s performance and it’s great to get the two points. It’s been a great start for us.”

This was his first ‘big’ game in a Donegal shirt. The full house at O’Donnell Park made for an occasion that wasn’t too unlike a Championship afternoon. It was a proud day for the MacNiallais clan, who were out in force to see their man turn in a Man of the Match display.

He said: “There was a massive crowd here; I’ve never seen anything like it at O’Donnell Park.

“There’s always pressure at home. You have to please the crowd.

“It was  big occasion here for me. A lot of my family were here, my granny was here, most of the family were. They’ll be happy with that performance.”

He had been drafted in last year, one of the newcomers into a squad that was on cloud nine after winning Sam Maguire.  Daunting doesn’t begin to describe the feeling.

“It is big time nerve wrecking,” he said.

“The boys are very good in keeping you calm and giving you good help. It’s especially nerve wrecking when you consider the experience these boys have. They’re great to be around.

“We were playing against the Ulster Champions here today so it’s nice to get it over and done with.

“It’s brilliant to get the win. The conditions weren’t too bad, apart from a rough spell in the first half.

“The pitch was heavy, but we expected it to be a lot worse. We played Tyrone in the McKenna Cup here in January and it was terrible. We could barely move that day, but it held up very well.”

With most of the walking wounded back to fitness again, MacNiallais can feel the pressure coming on, but he’s been well briefed on what it’ll take to keep his place.

“Nobody belongs in the team,” he pointed out.

“Everyone is training hard to get in, but no-one is guaranteed a spot. You just need to work hard and that does come out in matches. If you work hard you will get the rewards. We’ll get back on the training field this week to get ready for Meath. That’s all we’re focussed on now.”