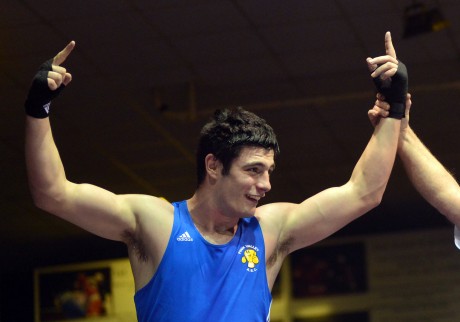 FINN Valley heavyweight Michael Gallagher has been officially confirmed as part of the twelve-strong Irish team for next month’s AIBA World Youth Championships in Bulgaria.

Gallagher was listed on the final team, confirmed on Saturday by the IABA, which will fly out to Sofia for the Championships on April 10th.

The powerful Kinletter man won his tenth Irish title in January when he defeated Gary Maughan to win the Irish Open Youth Championships and in February he took home a bronze medal from a major international tournament in Russia. Gallagher lost out to Russian Maksim Kolesnikov in the semi-finals of the VII International Youth Tournament, the ‘Nikolay Pavlyukov Memorial’, in Anapa, having previously defeated Latvia’s Artyoms Kolesnikov and Russia’s Oleg Fomichev Gallagher.

He is currently along with Team Ireland at a training camp in Dublin’s National Stadium ahead of the World Championships, which are acting as the only qualifier for the Youth Olympics, to be held in August in the city of Nanjing in China.

In Sofia, the top five (the semi-finalists and the quarter-finalist who was beaten by the eventual gold medallist) in each of the ten weight categories will qualify for China. While each nation, theoretically, can qualify 13 boxers, they are restricted to five boxers (three males, two females) for the Youth Olympics.

Should a nation surpass the qualification quota in Sofia, it is the duty of the country concerned to select their five.

A record 105 countries have registered to compete in Sofia, where Gallagher will be gunning for the medals.

He won a bronze medal at the European Schoolboy Championships in 2010, which were also held in Bulgaria.