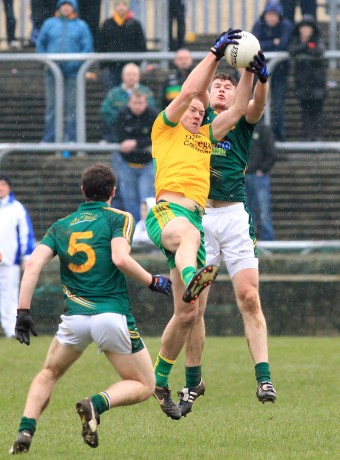 BY CHRIS MCNULTY AT MACCUMHAILL PARK

CHRISTY Toye commended Donegal’s fight, Eamon McGee was delighted to be in the thick of a ‘battle’ and Jim McGuinness was delighted to see his team get a ‘good, proper challenge’ as a Michael Murphy free earned them a draw against resilient Meath in Ballybofey.

Donegal were heading for a first League defeat of the year when Graham Reilly converted four minutes from the end of a game that Meath had been in control of for long spells.

Right when it mattered, with the last kick of the game, a free from a difficult position on the left sideline, Murphy faced the barrel of the gun.

The Glenswilly man was coolness personified as he sailed over a marvellous effort that keeps Donegal top of the pile ahead of a meeting with second-placed Down – who were beaten 1-12 to 0-8 yesterday – at Páirc Esler on Sunday.

“It’ll be interesting anyway, knowing James McCartan and that Down team,” McGuinness said with a mischievous grin.

His team found themselves in the unfamiliar position of chasing the play yesterday as Mick O’Dowd’s team raced into an early 0-6 to 0-1 lead with Shane O’Rourke and Bryan Menton winning the midfield war.

Frank McGlynn got up to score a 28th minute Donegal goal, deceiving off-the-line Paddy O’Rourke to score what was his second-ever goal in the county colours, only for Michael Newman to respond, almost instantly.

Donegal were just two in arrears – 1-7 to 1-5 – at the short whistle, but Neil Gallagher appeared from the bench to a rousing reception and instantly put his paws on a kick-out to get Donegal back on track.

With Christy Toye digging deep, Donegal, who had Ryan McHugh black-carded in the 48th minute, made a real game of it – and could have won it, with Murphy, Darach O’Connor and David Walsh all having chances late in the day.

“It’s a good sign that we’re showing that sort of fight early on,” said Toye.

“We showed a lot of character to try and find a way to win the game,” McGuinness observed.

“Meath were very resilient and kept plugging away. We probably should have scored one goal. Some days those things go for you. It’s a good opportunity to work the bench again.

“We were comfortable in the first couple of games, so it was good to get a tough battle – you always get that with Meath anyway. It’ll hopefully stand us in good stead heading towards the dry weather.”

Eamon McGee got his first taste of League action, as did Walsh, who was used alongside Karl Lacey, Gallagher and O’Connor.

“You want a battle like that there today,” McGee said.

“We were saying at half-time that you wouldn’t want to be anywhere else.”

Their meeting with Down has become something of a four-pointer. McGuinness said: “It’ll be a tough battle – but that’s what you want, to know where we’re at for the Championship.”