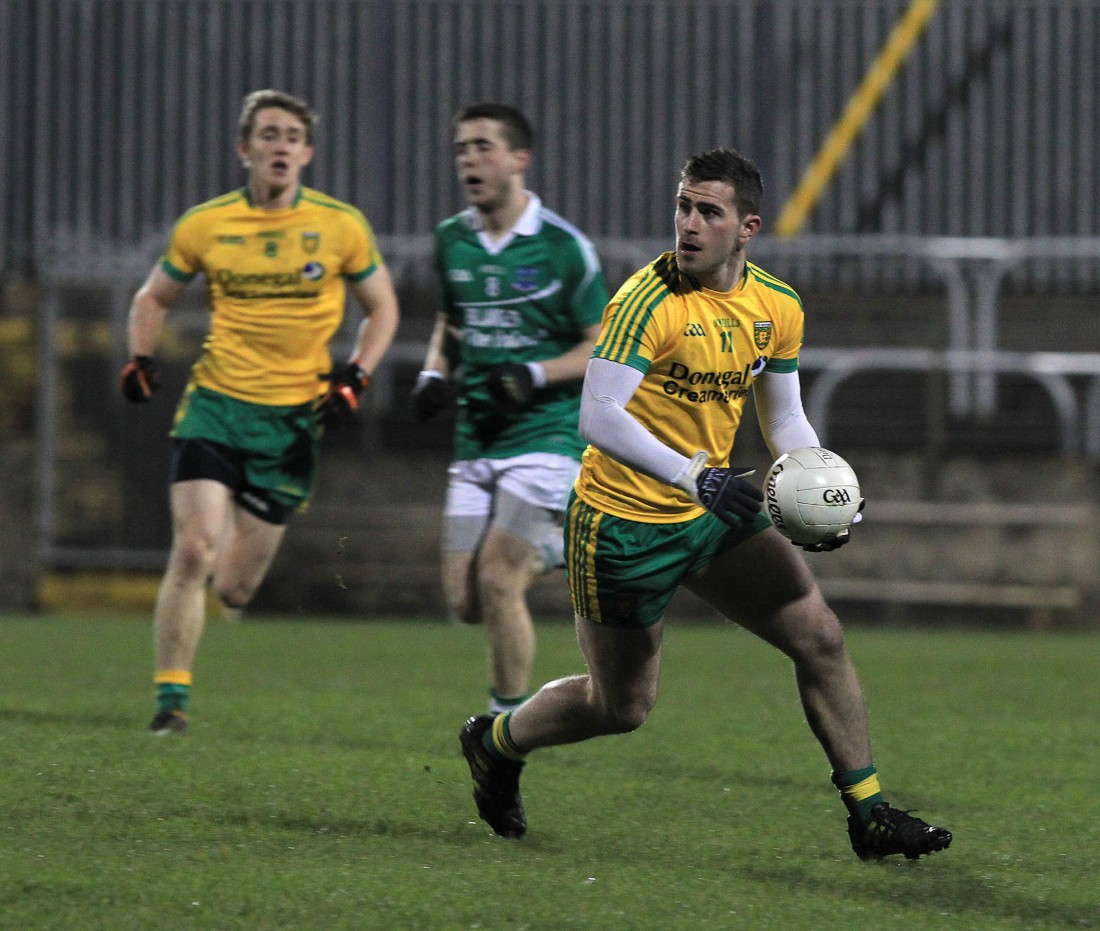 Patrick McBrearty of Donegal against Fermanagh.

MAXI Curran was delighted to see his side avoid slipping on the banana skin of Fermanagh on Wednesday night.

The Ernesiders came into the game billed as no-hopers, but with five minutes to go in the first half Vinny Connolly’s side had a 0-5 to 0-2 lead. Goals in the closing stages of the opening period, from Willie Gillespie and Ciaran Brennan, turned the tide for the home side.

“It was a very difficult game in a lot of ways,” Curran said.

“Conditions made for a very messy night.

“We were coming in on a hiding to nothing because people were writing Fermanagh off left, right and centre. We knew it was going to be a far more difficult assignment than that because they have a couple of very good players, maybe eight or nine men with MacRory Cup medals.”

When Gillespie rose to get his fingertips to a McBrearty ball in and turn past Paddy Sweeney, Donegal were ahead for the first time. Brennan’s strike, a mishit effort that completely deceived the hapless Fermanagh netminder, put Donegal into a position of real control.

Curran said: “The two goals were fortuitous. Fair play to Ciaran Brennan for getting up the field. He did well and got the rub of the green. Had they not gone in it would have been a very different game at half-time and it would’ve had a very different complexion.

“It was more workmanlike from us, rather than espousing any great quality.

“We got the scores at really crucial times. Patrick was in good form and showed well for the ball, Ryan drove very well despite being man-marked. It was more about hard work than any great flair or quality.

“We’re delighted to get over the line.”

With ace forward Darach O’Connor out of action because of a hamstring injury, Donegal were forced into another late reshuffle when goalkeeper Kevin McLoughlin had to pull out after sustaining a groin injury in the warm-up.

Donegal took some time, in terrible conditions, to find their feet, with that brace of goals giving them an edge.

Curran said: “We were nervous early on.

“These are only young fellas, some of them maybe only 18 or 19, we have four leaving certs. That was Hugh McFadden’s first Championship game at inter-county level, but because he’s a senior player people expect so much from him.

“Ryan McHugh is still such a young lad, too.

“It’s a big stage and probably a bigger crowd than some of them have ever played in front of.”

With Armagh and Antrim drawing after extra time those sides will meet on Wednesday to determine who faces Donegal in the April 2 final.

Curran said: “We have an awful lot to work on. We were nervous and we were sloppy in a lot of ways. We gave away silly frees, for throwing the ball or picking it off the ground. We have a huge amount of work on.

“The Under-21s is a real sprint and you don’t get much time to prepare.”