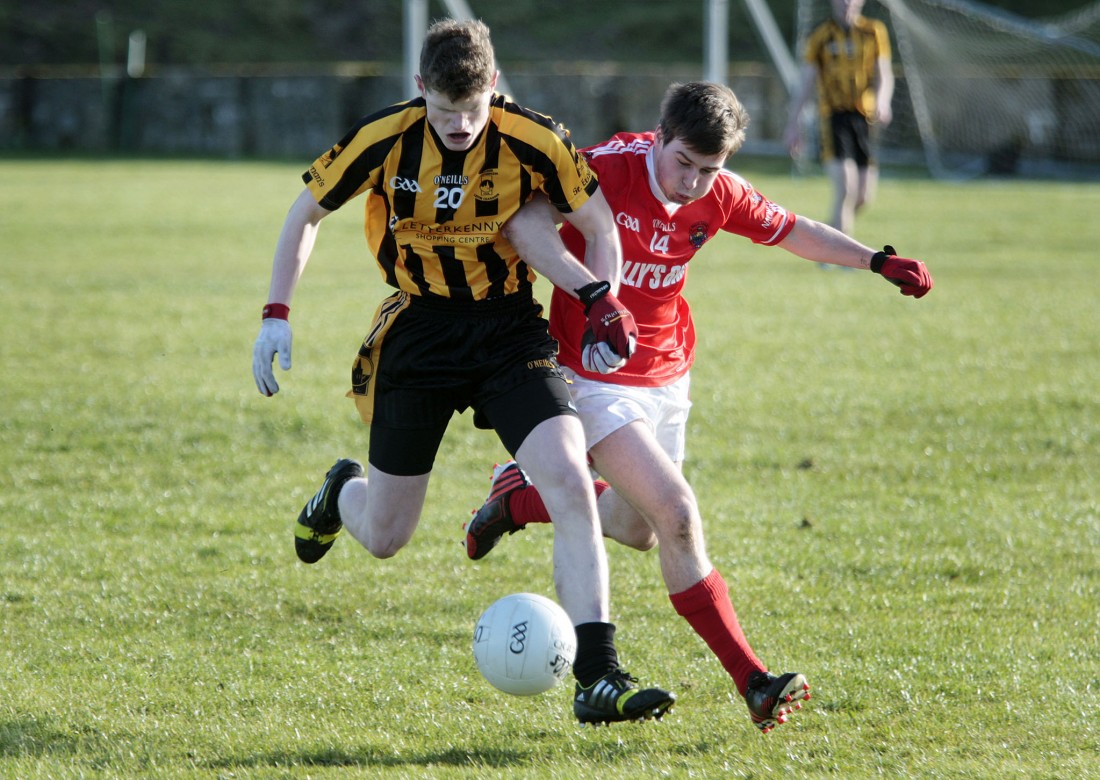 MAXI Curran is looking to bridge a generation gap with St Eunan’s this year.

The thirteen-times county champions turned to the Downings native in the closed season. Curran makes history as the first ‘outside’ man to manage the O’Donnell Park outfit and knows the scrutiny involved with the territory.

Double jobbing as the Donegal Under-21 manager, these are busy times, but Curran relishes getting his teeth into a project like that he’s undertaken  with St Eunan’s.

Although Eunan’s ended 2013 as the League winners, they were hurt by their Championship quarter-final defeat by Malin and squaring that particular circle is one of their main goals in 2014.

As the calendar’s page was turned onto a new year in January, it was confirmed that Mark McGowan, who kicked the winning point in the 2012 county final against Naomh Conaill and who had been targeted as a possible recruit for Jim McGuinness’s Donegal squad, was being forced to retire from the game. Aged 25, he was hanging up the boots because of a hip injury.

With Ciarán Greene relocating to London and Ross Wherity returning to America, not to mention Dualtach Molloy cutting short his brief stay back in Letterkenny, Curran, Eunan’s have been hit hard.

“This is a new team,” Curran said after yesterday’s three-point win over St Michael’s.

“We are going to try to blood young fellas. St Eunan’s, in a lot of peoples’ eyes, have an endless amount of talent. They do have a lot of talent, but St Eunan’s have lost a lot of players too.

“The fellas with all the medals are the wrong side 30 or very close to 30. There is a big gap because the next group are all in their early 20s.

“There is a huge generation gap. There is a generation of players gone there. It’s very important that the next generation are blooded in and that they’re put on the right footing for down the line.”

A day after playing for St Eunan’s College in the All-Ireland ‘B’ quarter-final against Colaiste na Carraige, Oisin Carr, Jordan McBride, Conor Morrison and Michael Miller all saw slices of action at The Bridge.

Curran said: “We had four Leaving Cert students playing today. It takes a while for them to settle in and get up to the pace of this football.”

Given the absence of that batch of twenty-somethings, Curran places added importance on the veterans of the side. In Dunfanaghy, Kevin Rafferty, Rory Kavanagh and Conall Dunne were all key of the starting personnel while John Haran’s retirement rumours were put to bed when he appeared as sub in the second half and Damian McClafferty began the game at corner-back only to leave injured after ten minutes.

Curran said: “Those men are invaluable, for their experience alone. When the game was in the melting pot, Kevin Rafferty kicked the big score that gave us the belief. Those fellas are crucial. Rory Kavanagh is worth his weight in gold and he won a couple of kick outs at a crucial time. Those men are keeping the young lads driving on at training and it’s a matter now of trying to tie it all together.”

A three-point win, sealed by a late salvo of scores, gets his reign off to a winning start. He’s retained Pat McNabb, who assisted Eamon O’Boyle last term and who managed Sean MacCumhaills in 2012, while Ciaran O’Donnell and Vincent McGlynn return to the backroom team.

Curran’s aim is a long-term one as far as the season goes.

He said: “With the way the Championship is laid out this year, we set out the stall at the start of the year that we wouldn’t start too early. We only started in February, so we’ve only got about a month under our belt. We’re very happy to get the win. It’s a tricky job for us at the minute, trying to balance it all.

“We have ten county players – five minors, two seniors and three under-21s – and we have the St Eunan’s College contingent too, who we don’t see from one end of the week to the next. It’s difficult to pull all of that together.

“Within that is the difficulty of players not playing with each other regularly. It’s just kind of thrown together.”

With his side trailing by four points by the time their first score arrived, the fact that their first flag raised was green gave them a massive injection. Lee McMonagle’s penalty goal was a big score.

Curran said: “The penalty gave us a bit of confidence. We were struggling to hold Colm McFadden at that stage, he kicked a couple of very good points.”

In the home dugout, Tony Wilkinson is also getting used to this managerial malarkey.

“It’s disappointing to lose the first game,” Wilkinson reflected on a day when his side had two penalty calls waved away in the second half. He said: “It was dodgy enough, but we’re not going to cry about it now.

“This was St Eunan’s, they’re a side who have a big advantage, a lot of big stars and a man like Maxi Curran on the line. They won’t be far away at all.”