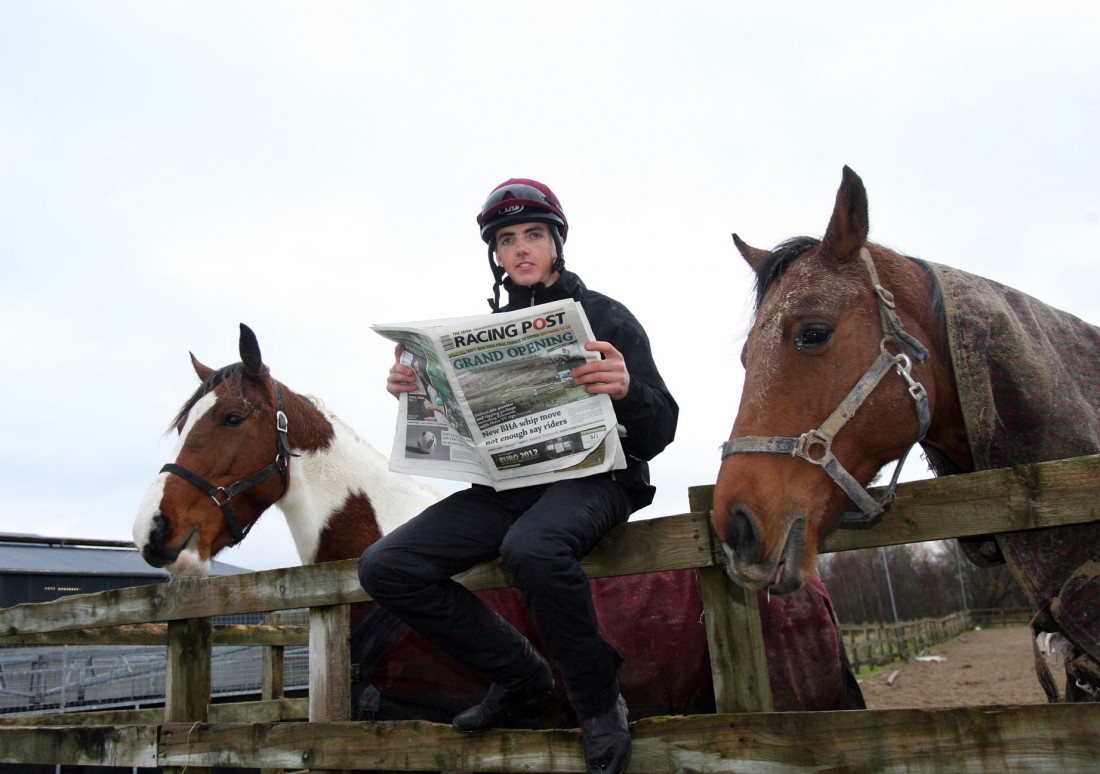 MARTIN Harley is aiming to get back in the saddle as soon as May.

The 24-year-old jockey from Rathdonnell, Letterkenny, sustained serious injuries when he took a nasty fall – ‘a bit of a toss’, as he calls it – off Red Art at a race meeting last Wednesday in Lingfield Park.

Harley broke the T1 verterbrae in his neck and fractured four ribs when he was unshipped from the well-backed Red Art in the home straight of the Ladbrokes Mobile Handicap.

Harley was discharged from St George’s Hospital in Tooting, London on Friday afternoon, having been transferred to the specialist neurology unit there from East Surrey Hospital, near Lingfield. While his injuries are not as serious as first feared, Harley will have to wear a neck brace for the next four to six weeks.

“I’m just on normal pain killers, two Ibuprofen and a few Paracetamol twice a day, it was a bit of a toss, but thankfully it’s not as bad as I first thought,” he told the Donegal News this week.

When Harley went head first into the polytrack, it was hard not to think the worst imaginable. Those thoughts fuelled even further when the protective screens went up around horse and jockey. Red Art died after breaking a shoulder in the incident that left Harley concussed and family members back at home in a state of limbo, unsure as to what was happening as medics attended to the jockey on the track.

Harley was accompanied to hospital by agent Neil Allan and fellow jockey Ryan Moore. The Professional Jockey’s Association (PJA) sent a DVD of the incident in the ambulance.

While he will miss some huge events in the flat season, including Saturday-week’s Dubai Sheema Classic at Meydan, Dubai, Harley hopes to be back in action by the middle of May.

He said: “I just want to get back in the one piece and get back racing again.

“This is the name of the game and I just have to get on with it.

“This is just the name of the game I’m in. The first thing that you think of is that it is the worst, but you know in this game you will break a certain amount. We know our bodies, too. They started to tell me that I’d had a punctured lung, but I knew that I hadn’t because I’d one of those before and know what it feels like.

“It’s one of those things that happens. It’s been a funny few weeks in racing with a lot of men getting injured.”

Bryan Cooper, Ruby Walsh and Daryl Jacob all broke bones at Cheltenham recently while Jason Maguire was taken out of an induced coma after being injured in a fall at Stratford, with Harley the latest man to be sidelined.

It looked innocuous at first as Harley was unseated from Red Art as the pushed for home in the closing stages of the tight seven-furlong race.

He’s watched it back since and doesn’t think he’d change tactics were he to run again.

“I had the gap before the other horse came from the outside and veered in on top of me,” he said.

“If anything he came behind me and had half a lenth on me. The other jockey wouldn’t be as experienced as some of the rest of us in that race. The horse rolled in slightly and I knew the gap was getting too small so I pulled out and the heels clipped.”

Harley had been looking forward to this weekend in Dubai, where he was to ride Mount Athos in the Dubai Sheema Classic.

Last September, Harley was appointed as the stable jockey for Marco Botti’s Prestige Place yard in Newmarket, having cut his teeth as an apprentice to Mick Channon.

In 2011, Harley was the champion apprentice jockey and in May 2012 rode Samitar to victory in the Irish 1,000 Guineas. In October 2013, he was aboard Tac de Boistron to win the Prix Royal-Oak for Botti in Longchamp.

Harley said: “Marco has been great. He understands the business and he’s been very supportive. He knows the dangers we’re in and he’s been looking after me well. I can’t wait to get back at it again and hopefully ride a few winners for him.”