Advertisement
HomeSportGAAJim McGuinness: “There is no set fifteen anymore”
Advertisement 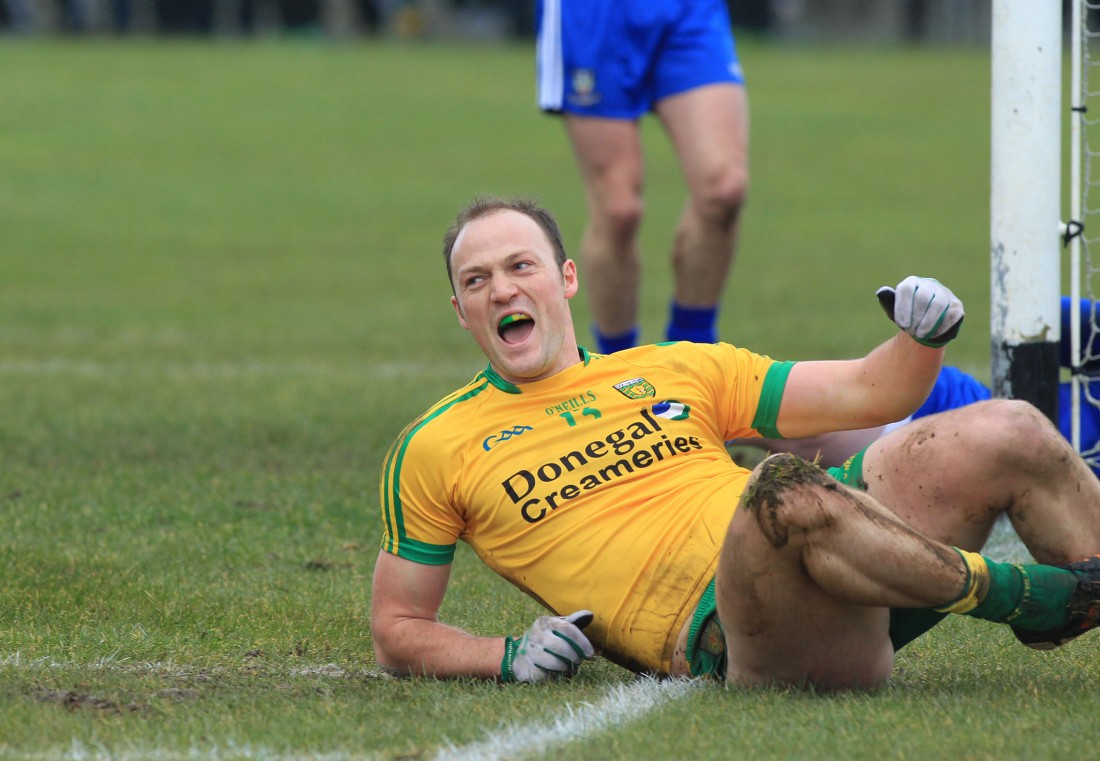 JIM McGuinness has a contented look about him these days.

In the moments after yesterday’s seven-point win over Monaghan at O’Donnell Park, the Donegal manager hailed the new-comers to his side on a day when they took every fibre of the chance offered.

McGuinness was holding his smiling three-year old son, Jimmy Óg, as he spoke to the media.

On the whole he was ‘happy with the performance’ and was particularly pleased that a further seven points had been added to the score difference, recalling the evening before when Jimmy Óg had ‘a few choice words for the referee’ while they watched the Meath-Armagh game on television.

As he totted his abacus on Saturday night, while he mightn’t have been losing sleep over it he will certainly have been paying attention to the sums.

Meath are in Ballybofey on Sunday and, with three wins from three, Donegal are now firm favourites for a return to Division 1.

“We just want to go and play the next game,” said McGuinness. You got the feeling if the Meath team bus had rolled in there and then he’d have been happy to return his players.

“We are enjoying playing in the games. We aren’t too worried about points difference or the table at this stage. We’re just doing our jobs and pushing on. Hopefully we’ll have enough points at the end of it to reflect that.

“Meath bring a lot of big men and a lot of physicality to the party so we’ll weigh all of that up for next week.”

Again the brightest sparks yesterday came from the fledgling names of Odhrán MacNiallais and Ryan McHugh. Neither are new-comers to the panel, but their time is now for making a mark. Those watching who will attempt to prise jersies number 4 and 12 from their clutches will find a vice-like grip to dislodge by now.

“Young boys are coming in and pushing,” McGuinness nodded.

“There is no set fifteen anymore. You have six subs now as well if you have the numbers to use them.

“We are a team who are benefitting from having a lot of our older players – who are central to the fold – being added. “Odhrán came in and did really well. It’s been the same with Darach O’Connor who is only 17 or 18 and Dermot Molloy’s form has been really good.

“Patrick McBrearty is coming back after an overuse injury and we’re trying to give him 15 minutes here and 20 minutes there. He’s making an impact.

“Ryan McHugh has been really good in the three games, playing intelligent football and he’s a very fit boy with a great brain. Eamon McGee is there in the stand today and Paddy McGrath is there to come back. Those are good problems to have down the line. The new faces have given us a fresh impetus and that’s good for the older players as well.”

McGuinness’s hand has significantly strengthened, but he’s not a man for counting chickens. Indeed, the television image of Colm Cooper, in the colours of Dr Crokes, going down and clutching the knee injury that keeps him out of action for the rest of the season is ingrained on the Donegal boss’s mind.

“I was just thinking: ‘Jeez, that could be any of our players at any given time’,” he said.

“But we’re in a far healthier position than we were this time last year, in terms of long-term injured dropping off. You have to balance that in terms of game-time, not overcooking the young ones but giving them exposure.  We’re trying to juggle all those.

“We’re working very hard in terms of the young boys and you cannot get there without exposure. It’s why we took the McKenna Cup a little more seriously this year. We tried to embed them where we could give them an opportunity to play with better players. They’ve got the McKenna Cup and three League games now.

“They’re all positives. Our objectives this year is to try and get the lads up the level by the end of the league, as well as to continues to give the young lads within the team. Those things have been going well.”

The weeks are ticking by nicely and McGuinness’s finger will be hovering across that ‘button’ he talks about before too long.

He said: “We’re in good shape, but we’re not fully at it yet. That is reflected in our training too – we haven’t pressed the button yet. We’re building steadily and we have a different approach to our training now. The few weeks between the League and the Derry game will be a big time for us, hopefully on hard ground.”