Advertisement
HomeSportGAAJim McGuinness: “It’s fairly obvious that we need to improve on our shooting”
Advertisement 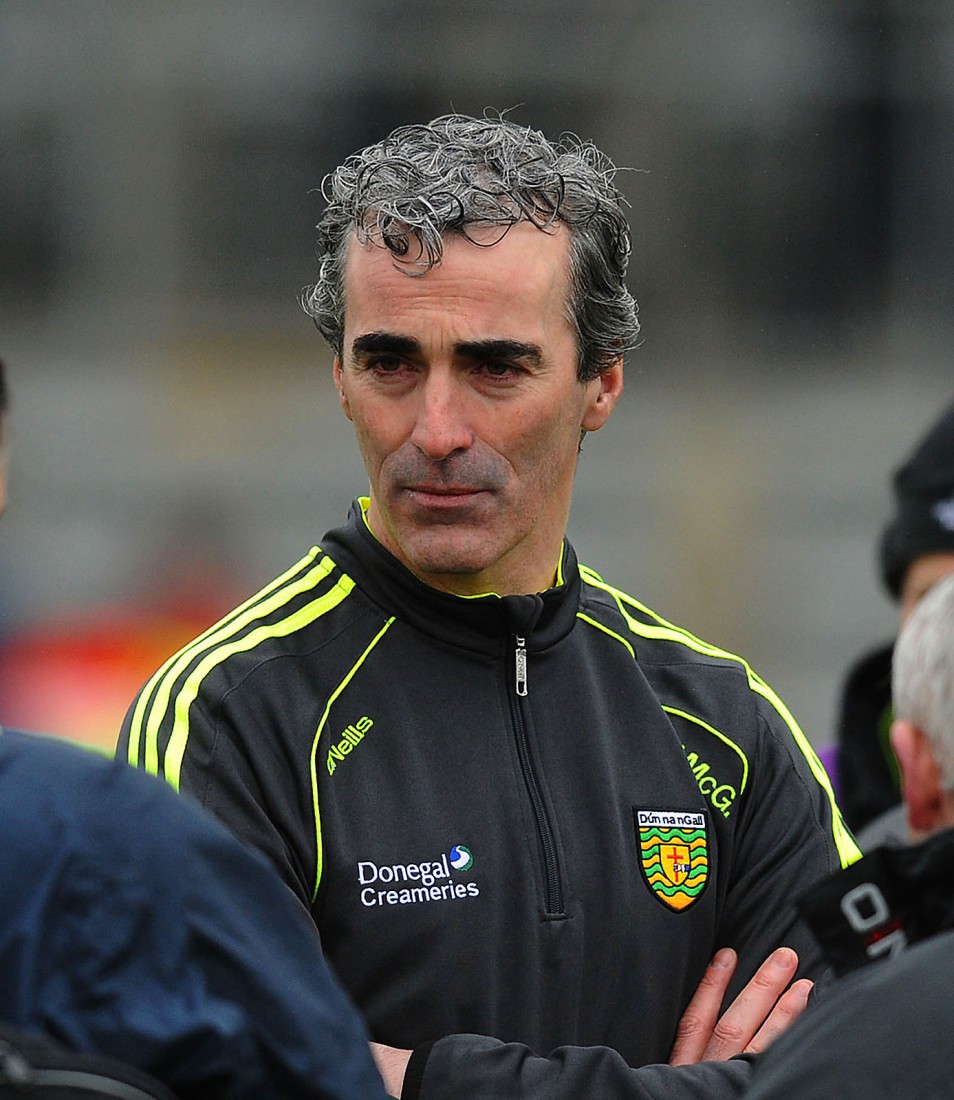 Jim McGuinness in Newry, where Donegal lost out against Down

BY CHRIS MCNULTY IN NEWRY

JIM McGuinness couldn’t hide his disappointment as Donegal fell to their first League defeat of 2014.

On a day when his side squandered a glut of chances, Down scored a win with Niall Madine’s first half goal they key.

When he assesses the tape, McGuinness will take note of an afternoon of passed up opportunties for his team.

Donegal kicked twelve wides in total – six in each half – while they popped another five balls into Shane Harrison’s hands and went twenty-four second half minutes without troubling the umpires, having taken 18 minutes before Dermot Molloy had registered the first score of the day.

“We’re obviously disappointed. Any day you kick that many wides and you get beaten by two points you have to be disappointed. That’s the bottom line on it.

“It was a good, competitive game and that’s what we want at this time of year. We’ll look at the tape and see where we need to push on, but it’s fairly obvious that we need to improve on our shooting.

“We’d done very well and been very economical in the rest of our games up to now. When we’ve seen the sticks we’ve been sharp.

“It’s just one of those days. Down set themselves up that way and we had to try and deal with it. We didn’t deal with it as well as we did in previous games.

“I’m just disappointed that we didn’t retain our composure. If we’d retained our composure, settled down and taken the scores when they were on it might have been a different result. That didn’t happen so you have to give Down the credit.”

McGuinness has had a couple of big battles with James McCartan during his tenure, including the 2012 Ulster final and the 2013 Ulster semi-final.

Last summer, Down appeared to have the measure of Donegal, but it was in the shooting stakes that the Mournes were beaten. Yesterday, economy was both their trump card and Donegal’s achillies heel.

McGuinness said: “You can’t take away from the fact that we had so many chances, from free kicks and from open play. We only needed for two of them to go over for us to get a draw so that’s disappointing.

“There was a strong breeze in the first half and we played into it. Their goal was a big score in the game and they continued that way through the game in that they defended the lead very well. They put everything into it.”

Madine’s goal had Down 1-6 to 0-5 ahead at half-time and Donegal looked to have cracked the code when Martin McElhinney and Leo McLoone posted early scores in the second half.

But Down hit back and the long spell without a score suited Down, who were quite happy to play keep-ball in the closing stages, with McCartan able to send on the cunning Benny Coulter.

McGuinness said: “We scored two very good points when we came back out for the second half. It would have been nice to push on from there and take the game to them even more.

“The game ebbed and flowed; they had possession, we had possession. We’re happy in that we got a tough battle and that we were really tested, but we’re disappointed with a number of things in our own performance that we didn’t get right.

“There are things that we’d normally have done in the previous four games. We need to look at that and rectify it for the Louth game.”

When Louth arrive in Ballyshannon on March 30 for the penultimate League outing of the regular season, Donegal find themselves locked with Down and Monaghan on seven points.

McGuinness said: “It’s tight and that’s the way it has been right the way through the League. It’s a very competitive League. We’re enjoying it and we’re finding out different things every single day we go out.

“We have a lot to ponder today than we had other days, but that’s a good thing. It’ll make us think more about it.

“It was a good, tough battle.

“It’ll go down to the wire with the three teams who are on seven points at least.

“With three teams on seven points it’s all to play for in the next couple of games.”

A triple substition saw McGuinness send Neil Gallagher, Patrick McBrearty and David Walsh into combat, while Darach O’Connor was introduced for the final ten minutes in a bid to conjour a goal.

The Donegal manager said: “Our strategy is to rotate and make sure everybody gets enough game time over the course of the League. It was a tough game for Patrick to come into up front.

“We put Darach on late on to see if we could sneak a goal, but that didn’t work out either. These are all bits and pieces that are all part of it.”