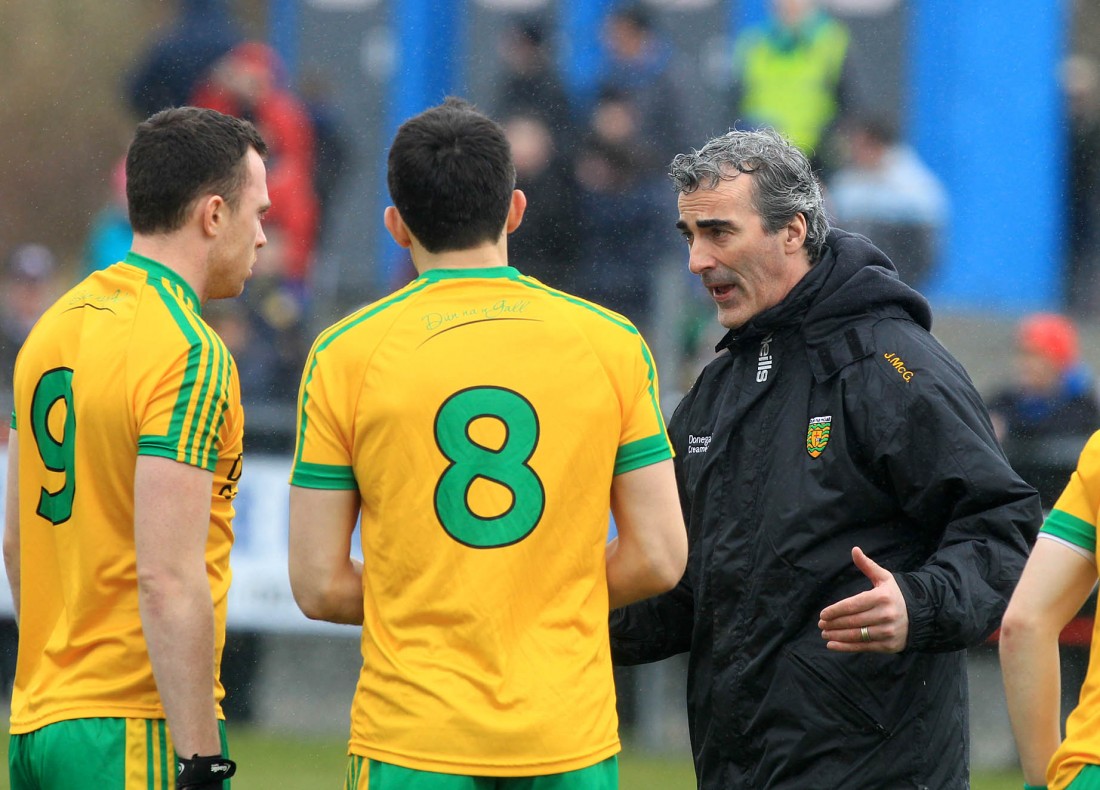 JIM McGuinness says Donegal are back enjoying football again, for the first time since 2012.

With three wins from their opening three National League fixtures of the year, Donegal are well positioned at the summit of Division 2 ahead of Sunday’s meeting with Meath at Sean MacCumhaill Park (throw-in 2pm).

With an injury-ravaged season cutting them to the marrow last year, Donegal have returned clenching their teeth in 2014 and can take a big leap towards a top-flight return with a win over Mick O’Dowd’s Royals this weekend.

“We want to keep pushing on now,” McGuinness told the Donegal News.

“We have enjoyed the three games so far and we want to keep up the good work now. We’ve had some very good performances. We have close to a full compliment so that probably allows us to enjoy things again. It probably is the first time since 2012 that we’ve been able to do that. The big one is still May 25th, though. That’s what it’s all about.

“We’re happy with where we are. We’ve been able to rotate the squad within games which has been very good for us.”

Eamon McGee will make his first start of the League this weekend, taking the place of Karl Lacey at corner-back in the only change made to the starting line-up from that which began Sunday’s win over Monaghan in Letterkenny.

McGee sat out the opening two games through a suspension and, while it had been expected that the Gaoth Dobhair man would see game time last weekend he was an unused sub.

However, he has been named to start this weekend with the 2012 Footballer of the Year, Lacey, rested.

“Given his hip injury and the soft conditions that we’re playing in, we have to be very, very careful with Karl,” McGuinness said.

“The ground on Sunday won’t be too solid either.”

The manager confirmed the intention to give the Four Masters ace a slice of action from the bench, while David Walsh could also make his return having been named among the substitutes. The Naomh Brid man trained on Tuesday night without feeling any ill effects on a hernia complaint that has kept him sidelined.

Dermot Molloy went over on an ankle during Sunday’s game, but is expected to be fit, while Frank McGlynn – who was forced off late in the game against Monaghan – trained on Tuesday night and will play against Meath.

However, Patrick McBrearty seems set to miss out on a place in the match-day squad. The Kilcar man has been named at number 26, but is struggling with a quad muscle injury. The forward, who has been in good form of late, played for the Donegal Under-21s against Galway last Sunday evening in Convoy, but will miss out this weekend.

A busy period for McBrearty, Martin O’Reilly, Darach O’Connor, Ryan McHugh and Hugh McFadden is on the horizon with the Under-21s set to open their Ulster campaign against Fermanagh on March 19th.

They are now training one night a week with the Under-21s and the other with the seniors, while O’Connor has an extra busy spell given that he is a part of the Colaisti Inis Eoghain squad that faces St Eunan’s College in the MacLarnon Cup final on St Patrick’s Day – a game that has been confirmed for 11am at the Athletic Grounds.

McGuinness said: “He has done very well. He has quite a bit on at the moment between ourselves, the Under-21s and the school team. We have a bit of balancing to do with him.”

On Paddy McGrath’s recovery, McGuinness said: “Heis ok but he is in a slow stage of his recovery. He’s a wee bit more long term before he’ll be back.”

Meath won their opening game, defeating Galway 3-18 to 4-11, but have since lost against Monaghan and Armagh. O’Dowd is without Conor Gillespie, Brian Meade, Cillian O’Sullivan, Davy Dalton and Caolan Young.

McGuinness, meanwhile, is quite content with his side’s position.

He said: We’ve been very happy with the first three games. Our focus doesn’t change. The focus is still on getting two points, just winning this game. We’re managing the guys who are getting back from injury as best we can. If we can get David Walsh and Eamon McGee out on the field this week then we’ll give game time to two more men who haven’t played in the League yet.”