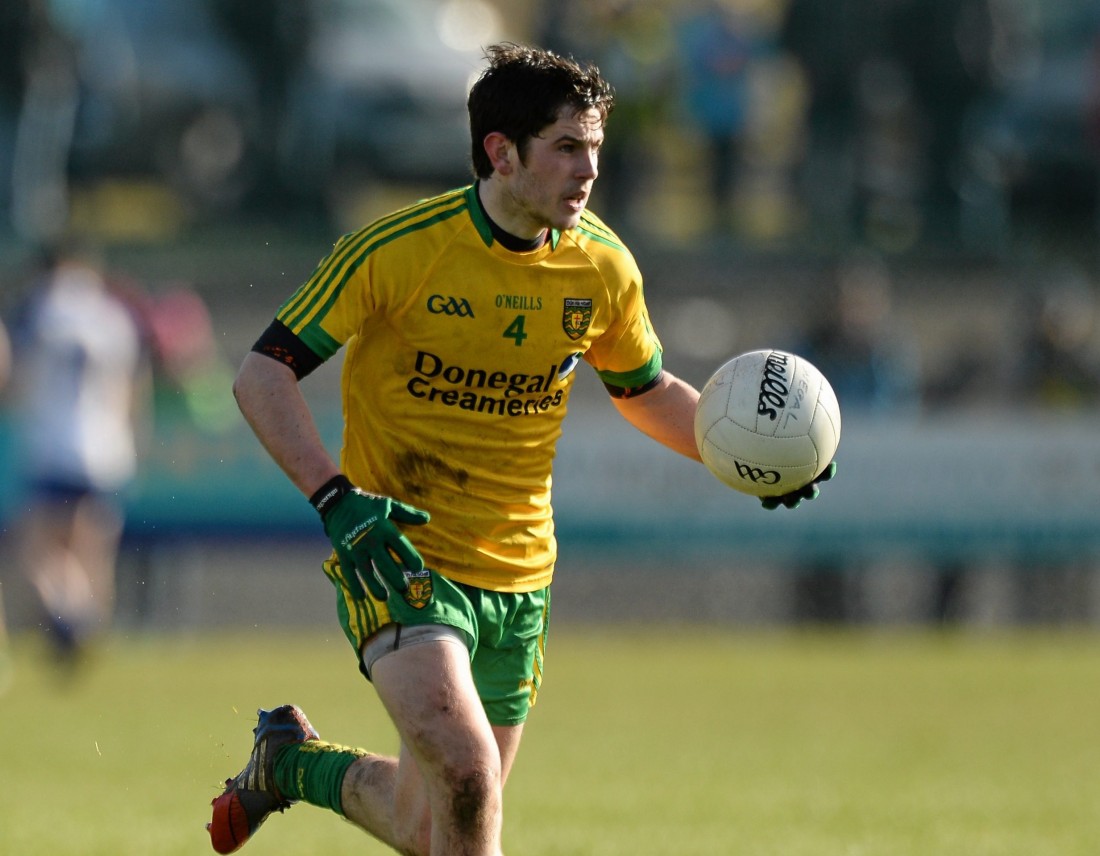 Ryan McHugh on the attack last Sunday against Monaghan

BY CHRIS MCNULTY
DONEGAL’S return with a spring in their step this year has given great cause for optimism.
This spring, the buds of young guns like Odhrán MacNiallais, Ryan McHugh and Darach O’Connor are beginning to bloom, but the return of Christy Toye, like an old oak tree in Donegal’s wood, gives the forest a fresh green coating.
Martin McElhinney and Dermot Molloy will prove hard to dislodge by the tree-fellers given their current standing.
For all the talk of Donegal’s new faces, O’Connor has been the only League debutant, bar the cameo of Stephen McLaughlin in Portlaoise, this year – and we can certainly expect to see more of ‘Jigger’ in the weeks and month ahead.
MacNiallais and McHugh were on the panel last year, although the former’s game time was limited to little more than half-an-hour against Dublin on the final day.
Now, though, the Gaoth Dobhair man has firmly established himself as a fixture in the first XV.
Last Sunday, he hit 1-3 against Monaghan – the first time since Patrick McBrearty against Cavan in June 2011 that a player other than Colm McFadden or Michael Murphy has hit a similar tally.
“I got the ball, looked up, saw the space and – I can’t remember what I’d done before that – I was going to take the point,” he says of his goal at O’Donnell Park.
Although he has a confident exterior, MacNiallais says stepping into the breach has been ‘nerve wrecking’.
“The boys are very good in keeping you calm and giving you good help,” he says.
“It’s especially nerve wrecking when you consider the experience these boys have. They’re great to be around.”
The same is true for the likes of McElhinney. At 25, he’s far from a rookie, but the St Michael’s man has been dogged by injury. Before the arrival of Jim McGuinness, he played just five times for the county.
The presence of club-mate Toye gives him a calm feeling in the dressing room.
“Christy brings so much experience,” he says.
“Even off the field, just sitting in the dressing room, Christy is a massive help. Everyone looks up to Christy – he has been about for so long.”
McHugh has matured so much and his intelligence on the ball was something Martin Carney remarked upon when he saw him in a recent game for his college, Sligo IT.
He speaks like a seasoned pro, too.
“We’ll not get carried away just yet,” he says of Donegal’s positive start to the League.
“We’re just taking it one game at a time. The three-week break was good for us and training was going well. Jim always says that he will pick the team based on training and everyone has been making a big push over the last couple of weeks to try and get a jersey.”
With Patrick McBrearty, Paddy McGrath, Neil Gallagher and David Walsh – based on last week’s team – yet to return to the starting line-up, McGuinness will have a head-scratching exercise in selecting his team before too long, given the performance of those who have taken the chance afforded to them.
“There is no set fifteen anymore,” the manager points out. You have six subs now as well if you have the numbers to use them.
“We are a team who are benefitting from having a lot of our older players – who are central to the fold – being added and young boys are coming in and pushing.”
McGuinness will manage his youngsters carefully. Between his introduction to the panel in 2011 as a 17-year old to the Ulster final in 2012, Patrick McBrearty trained just 25 times with the Donegal team. O’Connor is sitting his Leaving Cert this year at Scoil Mhuire, Buncrana.
McGuinness has never performed major surgery on his team, although there have been significant moves.
The return of Michael Hegarty was a huge fillip in 2011, as was McBrearty’s emergence for the Championship.
In 2012, Martin O’Reilly received the call, having played an Ulster Under-21 Hurling Shield final against Tyrone in a curtain raiser to the 2011 Ulster SFC final.
“Jim rang me up and I couldn’t really believe it,” he said. “I just wanted to get playing with the under 21s that year. I was only out of the minors, so I thought that was the realistic thing. Next thing I know is I’m on the bus with the senior team. Even getting the word that I was being called in to train with the team. That was just an amazing call to get.”
With young and old blending nicely in early March, McGuinness might well have trouble seeing the wood from the trees when the business end of the season rolls up – but he’ll not complain if that’s the case.
He says: “Those are good problems to have down the line. The new faces have given us a fresh impetus and that’s good for the older players as well.”